AWATE's Journey into the Past

AWATE joined the British Library this summer as Artist-in-Residence for Unlocking Our Sound Heritage, the British Library’s major project to digitally preserve and widely share the nation’s rare and at-risk sounds. During his five-month residency, AWATE will use the extensive sound archive to weave together a long-form genre-bending musical piece exploring the subject of diaspora and human migration. In this blog, AWATE writes about his first introduction to the Library’s sound archive and Conservation Centre. 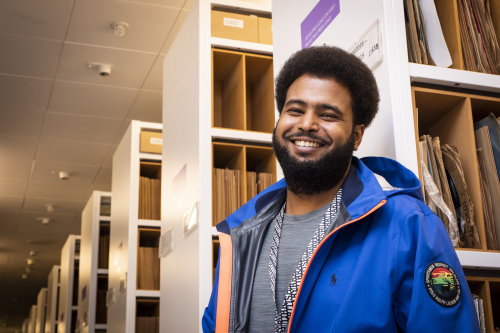 AWATE stands in front of shelves of collection items in the British Library's basement archives.

Having grown up in Maiden Lane Estate, a mile away from the British Library, I would see the grand building that was completed in 1998 and marvel at the architecture, art and posters, as I went by on the bus. As a child reading was my sanctuary away from the traumas that came with being a refugee in London during the 1990s, and the added fact that this building was next door to the fictional portal to Hogwarts made it even more special.

The mobile library that would come to the edge of our estate got the young me more excited than seeing an ice cream van, and in secondary school, I was the student-library liaison for many years, which meant I would write a list of up to 10 books a month that the school would order for us. Young adult novels by William Nicholson or Jacqueline Wilson, collections of short stories and poems by Benjamin Zephaniah or African history by Cheikh Anta Diop; my school would order them all.

On my first day as ‘Artist in Residence’ at the British Library – as part of the Unlocking Our Sound Heritage project – I was given a tour of the basement and conservation areas and realised that this place wouldn’t need me to help fill their shelves! 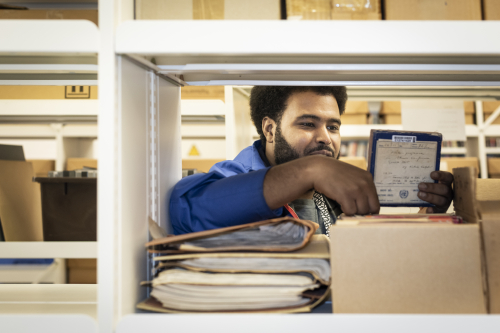 AWATE looking through boxes of cassettes and logs of music the British Library's basements.

The British Library’s Conservation Centre (BLCC) is a relatively new addition to the building, with state of the art studios amongst ancient sound equipment and recordings. One of the first things you encounter in the BLCC are two colourful, wood-panelled jukeboxes. Next to these are huge tape machines from the 1980s that would have been centrepieces of the top recording studios of their time. Further down the hallway, several gramophones with different designs line the walls beside a statue of Nipper, the dog famously used as the mascot of His Master’s Voice or HMV.

I was shown where and how recordings are digitally preserved in the BL’s system with tags and descriptions of the quality of the recordings before seeing the actual studios where they are digitised. After analogue formats are carefully assessed, sometimes needing sonic baths to remove microscopic specks of dust or a go around a tape cleaner which resembles a grandfather clock, the materials are ready for the complicated process of digitisation. This involves a puzzle of directions, as some reel-to-reel tapes are mismatched at various different speeds for a single recording. The analogue records being digitised, whether they’re vinyl, shellac or lacquer, sit on a turntable made sturdy by a large block of marble so that vibrations in the room or the nearby London Underground trains do not jog the needle.

During my tour of the second floor of the basement, where a considerable parts of the sound collections are held, I was amazed at every turn. As soon as you enter, you notice that the ceiling is covered in shiny metal rails that look like they belong in the Terry Gilliam classic, ‘Brazil’. These chutes are used to transport books from the basement to the reading rooms where people have requested specific titles. Past the ‘Shawshank Redemption’ looking gates, the vastness of the archives becomes evident. 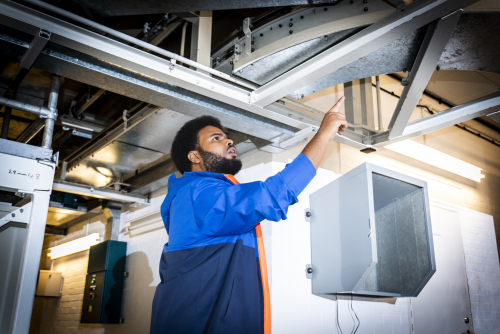 AWATE stands beneath the cavernous ceiling of one the British Library basements, examining the conveyor system that transports books to the reading rooms.

From top to bottom, row after row, and in all directions there are seemingly endless shelves of artefacts. When looking closer, the variety of the objects is clear. CDs and cassette tapes, I know. Vinyl records, I know from my life as a rapper and music lover. But in addition, DAT tapes from the first WOMAD festival are stored beside reel-to-reel tape cases looking like giant wheels of mechanical cheese inside. Tapes of recordings from LBC and Capital Radio line the walls with words on them like ‘Royal Wedding 1981’ or ‘Pope Shooting’. The further I went; it was like stepping further back into time. At the push of a button, what I assumed were walls would move to reveal further rows of treasure.

Copper-coated cases containing gramophone matrices - or masters - held some of the earliest BBC Radio recordings available. Speeches by government ministers sat beside broadcasts from the Middle East. Gloves must be worn before handling any of these. I kept my gloves on as I was shown the oldest objects in the sound archive. Dating to the late 1890s, these wax cylinders with their beautifully designed labels from the Edison and Lambert companies’ document ethnographic research done in Oceania, West Africa and the music halls of London. The vivid colours of the wax cylinders made no sense to me, as they looked to have not faded at all in over 100 years with bright blues, reds, greens and pinks. 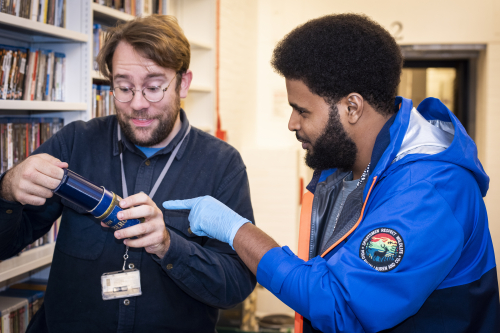 AWATE chats with Jowan from the British Library’s Acquisitions and Cataloguing team, while inspecting wax cylinders over 100 years old.

For days after my tour of the BLCC and basement of this great library, it was all I could think about. Seeing all these pieces of history in different formats from all over the world was overwhelming. The number of sound recordings in the sound archive reach almost 7 million and setting eyes on each of the physical originals would take far longer than my five-month residency would allow. In essence, all I had really seen was the outside of these artefacts, the cover and not the content. The history documented on them itself would take an eternity to experience. And there is more being added every day…

I began to ask myself questions about how long it would take to listen to all of the cylinders, records, tapes, wires and CDs in the basement? If someone lived down there for a lifetime, would they even make a dent in the amount of content stored on those devices?

Without the expertise of the incredibly knowledgeable and outgoing staff at the British Library, this project would be impossible, as I would be lost in the sheer amount of recordings in their possession. The curatorial teams have taken time out of their busy schedules to point me in the right direction for what I wish to accomplish. I still hope I don’t get lost, though.

Learn more about AWATE and his residency at the Library

Find out more about Unlocking Our Sound Heritage