Champion Jack Dupree (1910-1992) was a blues and boogie-woogie pianist and singer from New Orleans. James Hogg’s 1968 interview with him for Radio 4 gives a fascinating insight into his life as a blues musician, amongst various other professions. The interview was recorded on January 4th 1968 at Dupree's home in Halifax, West Yorkshire. It was broadcast on January 6th 1968 on the BBC Radio 4 programme It’s Saturday. 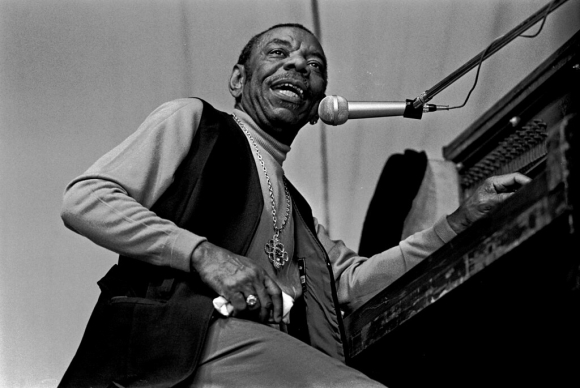 As well as being a wonderfully expressive vocal storyteller, Dupree also plays the piano throughout the interview. He accompanies his recollections with simultaneous improvisations on the piano; the cadences of his wandering blues complementing the musicality of his voice. This is demonstrated in the following clip as Dupree explains how he came to learn piano from a young age, after his parents were murdered by the Ku Klux Klan when he was just one year old. He goes on to explain how he grew up alongside Louis Armstrong, who was living in the same orphanage, and began playing trumpet with a paper cone before moving onto playing with jazz musician King Oliver.

Dupree played alongside members of the New Orleans jazz and blues scene from the age of eight, learning from the barrelhouse pianist, Willie ‘Drive 'em Down’ Hall. Here he gives his insight into his experience of the music scene at the time and why New Orleans was the ‘home of jazz’, rather than blues.

He later worked as a prize fighter in Chicago, becoming a successful boxer, hence his nickname ‘Champion Jack’ Dupree. He also worked as a Navy cook during World War Two, spending two years as a prisoner of war in Japan, before returning to professionally make blues records. His first and most well-known album was Blues from the Gutter, released in 1958 by Atlantic Records.

By 1969, Dupree surprisingly settled in Halifax, Yorkshire with his English wife. He explains to Hogg why it made sense for him to settle there:

This brief but captivating interview led me to research Dupree in more detail, uncovering the remarkable life of a man who used his music to overcome a huge amount of pain and hardship. Later in the interview he explains what the blues means to him, describing it as a ‘medicine’. He explains how the blues is something you have to have lived: 'if you’ve never had no miserable life you cannot do it…it’s always a life story, it’s not just playing.’

Clip 4 - Champion Jack Dupree on what the blues means

The full interview is fourteen minutes long and if these four highlights have interested you, I recommend listening to all of it in the British Library Reading Rooms and learning more about Dupree’s adventurous life story. Full recording details can be found on the British Library Sound and Moving Image Catalogue.

This recording has been digitised as part of the British Library's Unlocking our Sound Heritage project.