Recording of the week: Dr John interviewed by Charlie Gillett

Charlie Gillett, in his later years best-known as a World Music broadcaster, spent many years investigating the roots of rock music. He hosted Honky-Tonk on BBC Radio London in the 1970s where many of his guests were influential figures in the history of rock that Charlie traced in his book The sound of the City.

This excerpt is from an interview Charlie conducted with legendary New Orleans musician Dr. John, who describes a recording session in London where he had to find musicians at short notice – luckily he had some good contacts that resulted in some well-known names coming to his aid. The sessions were eventually issued on his album The Sun, Moon & Herbs.

The entire interview takes place in the back of a taxi driving through New Orleans with all the background noise that entails plus the occasional interruptions of a small child who is also in the cab. It probably wasn’t good enough quality for broadcast use but does provide first-hand testimony about Dr John’s relationship with his fellow musicians and management and the problems they encountered with the stresses of touring and recording. 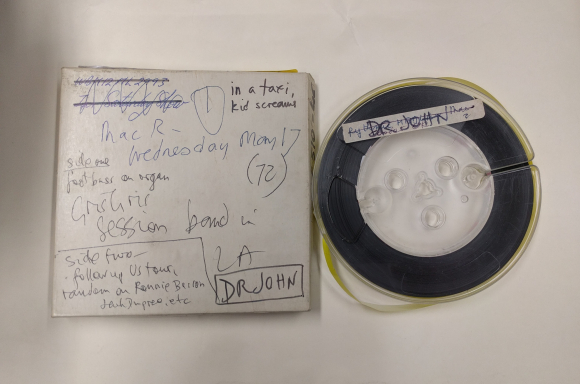 The Charlie Gillett collection contains interviews and broadcasts from both his early work as a presenter and writer specialising in the history of rock’n’roll and his later interest and influence on the development of the world music scene in the UK. He died in 2010 and his collection has been digitised as part of the British Library's Unlocking Our Sound Heritage project.