Recording of the week: No prisoners

This beautiful song is composed and performed by Madi Lehbib, who sings and plays percussion on this track, with accompaniment from guitarist Mahmud Bara. The song is sung in local Arabic dialect – Hassaniya. Madi’s lyrics reject the idea of political imprisonment and oppression, which his community – the Saharawi’s – have experienced as refugees living in exile in the Tindouf Province of South-Western Algeria.

The Saharawi’s are ethnically mixed descendants of Berbers, Arabs, and Black Africans. They have been living in exile since the mid-1970’s after fleeing from Moroccan forces during the Western Sahara War. Today, their people and communities live in refugee camps set up across the Tindouf Province. Having lived for centuries in the deserts of the Western Sahara, known as Africa’s last colony, the Saharawi’s land is, to this day, still occupied by Morocco and pending decolonisation.

Musical performances at the camps are common, as there are many musicians within the Saharawi community, though the lack of resources in the refugee camps forces musicians to constantly improvise with their instrumentation. In this recording, Madi is playing percussion on the body of his friend’s guitar. There is a humble beauty to his performance, which brings the Arabic voice and acoustic guitar together in gentle harmony. 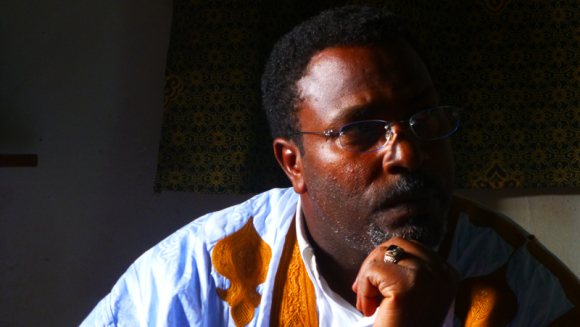 Photograph of Madi Lehbib during the recording session

This recording was made by sound recordist Violeta Ruano Posada. Violeta spent six months staying in the various refugee camps during 2013 and 2014 conducting ethnographic fieldwork as part of her PhD research at London’s SOAS University - commissioned by the sound archive. This recording was made at the “Cape Bojador” refugee camp and was recorded at the camp’s shabiba (youth centre) with the help of a group of local Saharawi sound students.