Those of you who visited last year's British Library exhibition 'Listen: 140 Years of Recorded Sound' will remember a small display of one-of-a-kind voice-recording discs originally made by the public in coin-operated automatic booths.

Among these was a single 'Voices of the Forces' disc, loaned to us, like the other discs in this section, by the broadcaster Alan Dein.

The 'Voices of the Forces' scheme, which was inaugurated in April 1945, enabled members of the Forces to send messages home to their families. Each recording cost one shilling and ninepence, and the sender spoke into a microphone resembling a hand telephone, while the record was cut at a NAAFI (Navy, Army and Air Force Institutes) club by a Sergeant recordist. The discs were 5" (12.5 cm) in diameter and played at 78 rpm, so were quite limited in duration. 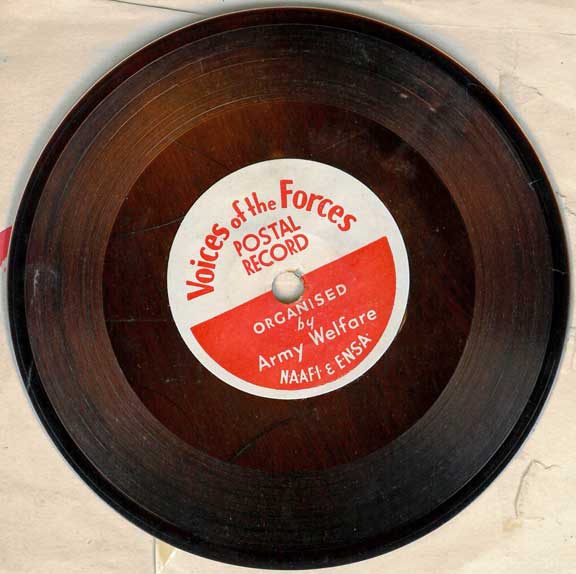 Until this year, the Library had no good examples of these discs (although there must still be many out there in private hands) so we were delighted to be contacted by Piran Montford, who offered as a donation an original 1945 disc featuring his father Adrian Raphael Montford (aka 'Monty'), complete with its original mailing envelope. Although the disc was damaged, our head audio engineer Robert Cowlin was able to digitize and restore the recording.

Adrian Montford, now aged 96, had not heard the recording since he was a young man. He didn’t remember the contents, but suspected he still retained a strong Australian accent (he was born in London, but raised in Melbourne, Australia, before he returned with his family to live in Sutton in 1938).

The disc was recorded in either North Africa or Palestine in September 1945 and was posted home to his mother in Sutton. 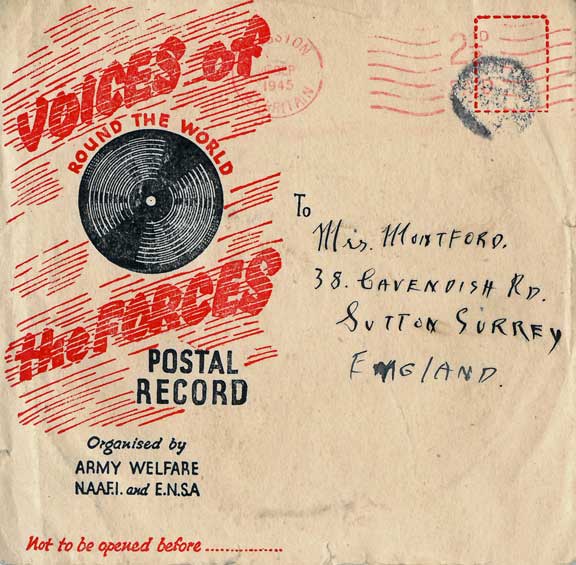 The son of the sculptor Paul Raphael Montford, Adrian studied at Sutton Art School and then entered the Royal Academy, London, to study painting, and later sculpture

After the war broke out, Adrian joined the Home Guard in Sutton. He was called up on his 18th birthday, and served the entire war as a Private in the East Surrey Regiment.

Adrian was injured by a mine in the first battle of Monte Cassino in 1944, and developed gas gangrene. He had penicillin injected directly into his leg, a very early use of the medicine. In an Evening Argus interview from 17 September 2006, Adrian described his war experiences as '...traumatic, but all wars are traumatic. I didn't expect to survive.'

The end of the war in 1945 found Adrian in Palestine. While in Palestine, he took two flights to Florence, Italy, to study the art there. It was around this time he made the postal record of his voice.

Listen to Adrian Montford in 1945

Adrian was retained in the army for at least a year after the outbreak of peace. He was moved to Greece (see photo below of him taking a break from directing traffic on Chalkida's Old Bridge near Athens). He ended up driving for a sergeant who patrolled the local brothels throwing out soldiers.

After being demobbed, Adrian returned to study at the Royal Academy in London.

In 1951, he was awarded a 1st Landseer Prize of £20 and silver medal for a composition in sculpture. His first attempt to win the Prix de Rome led to a Picture Post magazine cover photo of the sculpture being cast. He attempted again, and in 1954 won the Prix de Rome for Buddha’s Sermon on the Flower.

Adrian went to study at the British School in Rome for two years. He returned from Italy to London, riding his Lambretta scooter over the Alps. Upon his return, he applied for a driving licence. A period of teaching at Sutton Art School and at Folkestone Art School followed.

Adrian taught sculpture for over 30 years at St Martin’s School of Art, with colleagues such as Anthony Caro and David Annesley, under the headship of Frank Martin; at this time, it was the one of the most famous sculpture departments in the world.

In August 1962, he married Selma Hope Nankivell (1934-), an artist and art lecturer. She became involved in preserving Brighton’s heritage, and was granted an MBE for this in 2006. They moved to Brighton in July 1965 with a young family to a house with a large garden. His life passion has been gardening, planting many of the trees to be found in the street. They still live in the same house 54 years later in 2019.

Adrian came out of retirement to teach life drawing at the Royal College of Art, London, ca. 1990, for some years, and he appeared on ITV’s South Bank Show around the same time, and in an article in The Times of 5 February 1991. He exhibited at the Royal Academy’s summer exhibition, continued to paint and make prints, and in later life, has been increasingly drawn to pottery.

Adrian has been a keen gardener, and although now more frail, he still takes great pleasure in the beautiful garden he has created. The photo below, taken by his son Piran Montford, shows Adrian in his garden studio, surrounded by both his sculpture and plants. 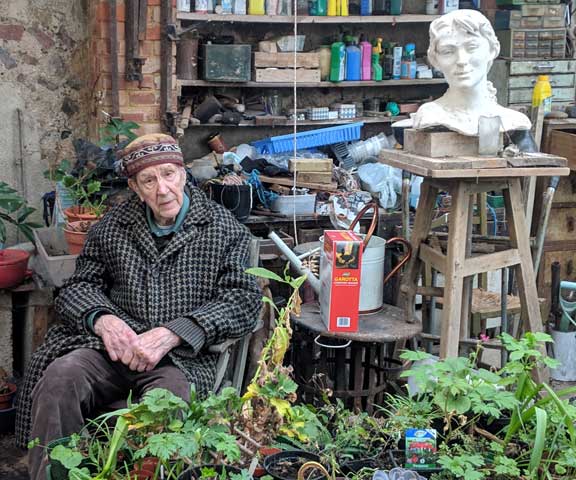 With grateful thanks to Piran Montford for the biographical information incorporated in this piece, and to Robert Cowlin for making the digital transfer of the disc.