A tribute to Stephen Cleobury by Jessica Duchen 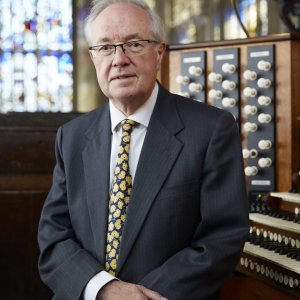 I am deeply saddened to hear of the death of Sir Stephen Cleobury last week, on the evening of - appropriately enough - St Cecilia’s Day. It was a great privilege to spend several days with this legendary musician at his home in York earlier this year, interviewing him in depth for National Life Stories at the British Library.

Sir Stephen was already terminally ill, and our sessions inevitably were punctuated by the need for rest. Yet to sit and remember the details of his musical journey through some of the finest religious institutions of the UK seemed to infuse him with remarkable vigour, despite his undoubted suffering.

From his childhood experiences as a chorister at Worcester Cathedral to his early posts at Westminster Abbey and Westminster Cathedral and thence to the music directorship of King’s College, Cambridge, there seemed an infinite number of anecdotes to tell; and we spent some valuable time exploring the development and inner workings of the Festival of Nine Lessons and Carols, broadcast annually live from King’s.

Our interview also encompassed Sir Stephen’s lucid explanations of musical techniques that are potentially in danger of disappearing - species counterpoint and the realisation of a baroque figured bass. We discussed his assessment of the personal qualities required to be a good organist and a sensitive choral conductor; and how to deal - or how not to - with a large group of excitable youngsters on a choir tour. There is much more besides.

As a music student in Cambridge in the 1980s, starting there only a few years after Sir Stephen began his music directorship at King’s College, I was aware of him and his work almost every day, though our paths crossed rarely (I was at a different college and I can’t sing!). The presence of King’s College Chapel at the heart of town and gown, the pervasive influence of the English choral tradition upon which he built so strongly, and my own sense of not quite belonging to this exquisite and rarified world all got under my skin. Talking to him this year was moving and cathartic on the personal level; and I hope that the interview recording will serve as a valuable memorial in perpetuity, and one that will inspire others as it inspired me.

My profound thanks to his wife, Emma, for her help and forbearance during the recording sessions and to King’s College, Cambridge for funding the interview.

Jessica Duchen interviewed Stephen Cleobury for the 'National Life Stories: General Interviews' collection. The interview can be listened to at the British Library in St Pancras or Boston Spa and found by searching C464/99 at sami.bl.uk

Posted by Charlie Morgan at 2:32 PM