Hollywood Fights Back is a two part radio programme made and financed by the Committee for the First Amendment and broadcast on the American network ABC.

The programme's content is spread across 6 shellac discs - also called 78s - which are automatically coupled for seamless broadcast playback.

This programme was made in reaction to the House Un-American Activities Committee (HUAC) hearings led by Representative J. Parnell Thomas of New Jersey into so-called subversive, Communist activities of private citizens, government officials and businesses.

In November 1946 Thomas took over HUAC, which had been running in various forms since the early 1930s, and he immediately took aim at Hollywood and what he considered a Communist influenced motion picture industry. He targeted actors, producers, screenwriters and directors for their suspected Communist beliefs and for supposedly spreading propaganda in their films.

In September 1947 Thomas summoned dozens of Hollywood actors and screenwriters before HUAC but only ten appeared for questioning. This group would become known as the Hollywood Ten. Thomas opened the hearings with an imposing line up of ‘friendly’ witnesses ready to name names and publicly out colleagues they thought might be guilty. In this case, guilty could simply mean suspected. For example, Walt Disney and Ronald Reagan - then President of the Screen Actors Guild - were both willing and generous when offering up names of suspected Communists and their sympathisers. Disney and Reagan merely mentioning colleagues or employee names during the hearings was enough to incriminate them. Despite these accusations and in the face of great pressure, the Hollywood Ten refused to answer any of the Committee's questions and citing the 5th Amendment to support their silence. Making an example of their insubordination, Thomas fined and sentenced the Hollywood Ten to jail for up to a year for their contempt of Congress.

Reacting to such a devastating blow dealt so close to home, Phillip Dune, Myrna Loy, John Huston and William Wyler formed the Committee for the First Amendment (CFA) in September 1947 and met for the first time in Ira Gershwin's living room. They were sympathetic to the Hollywood Ten's plight but they were also worried for their own careers. If the Hollywood Ten could be summoned before the HUAC and have their reputations and personal beliefs laid bare and publicly scrutinised, then so could Dune, Loy, Wyler or anyone else from the film industry. They described the CFA as a non-political group of stars, writers, producers, scientists, senators and men of letters.

Timed to coincide with the first episode’s broadcast, the CFA flew in two groups to Washington D.C. – one departing from Hollywood and the other from New York - to observe the hearings and to deliver a petition for redress of grievances to the US government, which is part of the First Amendment and a basic tenant of American democracy. In this case, the petition was a formal complaint made against the US government and under the Bill of Rights, any American citizen can lodge one. Accompanied by a PR campaign filled with photo shoots and interviews, this trip to Washington, D.C. was choreographed to make the most of the stars' high profile status, popularity and beloved public opinion and do so using as many mass media outlets as possible. This method ensured the CFA shared their message with as many Americans as possible, as many ways as possible. Hollywood Fights Back was one part of that campaign. 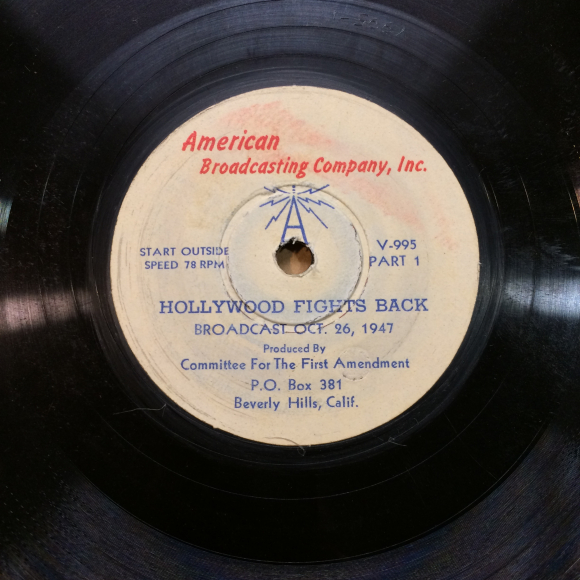 The first episode served as an introduction to the HUAC, its hearings as well as the CFA and its objections to both. It was opened by Judy Garland and followed by Gene Kelly, who suggested that if Americans liked films made by those subpoenaed by HUAC, then they could be called subversive too. Kelly suggested the HUAC objected to and dismissed average Americans’ sensibilities and points of view.

The episode's contributors are quick to ask who is behind HUAC and what is its purpose?

William Holden explained who spearheaded HUAC and should be held responsible for its members' actions.

Its purpose, John Huston continues, was to propose legislation that counters subversive activities. By the time Hollywood Fights Back was broadcast, the HUAC had been in existence for nine years and in that time, it proposed only one piece of legislation that was eventually rejected by the Supreme Court as unconstitutional.

Hollywood Fights Back made a clear distinction between what it found unsavoury about HUAC investigations and what it considered unlawful. The CFA did not approve of the topics addressed at the hearings but their real objections were directed at the way the hearing were conducted.

Lucille Ball, famous for her comedy routines and ability to make people laugh, was profoundly serious when she explained how she and her fellow CFA members thought HUAC was tarnishing the Bill of Rights. This document, fundamental to American democracy, and the civil liberties it granted to American citizens, she explained, was only one pillar of their democratic society and if that pillar were knocked over, then the rest could fall too. Ball was keen to make listeners understand that HUAC and the hearings threatened much more than the careers of Hollywood film stars.

And if Ball's comments fell on deaf ears, the CFA enlisted WW2 veteran Audie Murphy to help listeners appreciate the CFA's concerns. Murphy was the most decorated WW2 American veteran and was well known and well respected across America. Murphy explained how the HUAC was undoing all the hard work he and his fellow veterans did to win the war and protect democratic values and rights not just in the United States but across the globe.

Once so-called Communist propaganda was removed from Hollywood, who would the HUAC’s target next? How long would their hunt for allegedly subversive thoughts and activities continue? CFA members feared that other creative industries such as theatre and literature would come under the same devastating scrutiny. John Garfield explained some of the investigations already taking place into people working in these other fields.

As the episode concludes, Judy Garland makes another appearance and her pleas were aimed straight at the heart. She issued a call to arms inspired by duty and driven by fear of complacency. 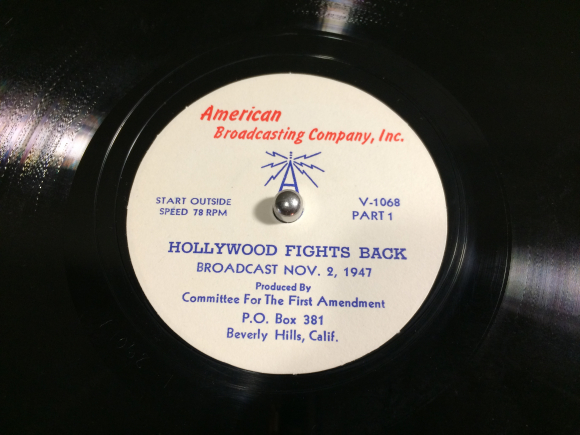 The second episode focused on what the CFA considered HUAC civil liberty violations, a claim as dangerous for them to make as it was for those accused. If CFA members were not already under HUAC scrutiny, then they were aware they probably would be after their campaign. Simply mentioning sympathy for HUAC targets was enough to raise suspicion and potentially damage careers.

Nonetheless, the second episode addressed what CFA members believed was the heart of the matter: a committee acting with the government's blessing and devoted to rooting out un-American activities was conducting its affairs in an un-American way. Of course, the measure of 'American' was different for both sides and each would have argued their perspective was the true democratic one. CFA members were dedicated to the First Amendment, freedom of speech and the right to defend oneself against accusations; the HUAC was committed to identifying and stopping real or perceived ideas and individuals who they felt challenged and threatened democratic values and the historical status quo. Contributors to Hollywood Fights Back lambasted the HUAC again and again for treating witnesses as 'friendly' or 'unfriendly,' a practice they feared prejudiced public perception of the hearings and the people they targeted. HUAC did not, in the contributors' opinions, give the accused a fair chance to defend and protect themselves.

The HUAC offered one perspective - subversion and guilt - and in an attempt to balance the debate, Hollywood Fights Back offered alternative opinions. To accomplish that, the contributors read newspaper articles, editorials and public statements published around the country in which the authors questioned HUAC’s ethics or disagreed with its methods. These other voices in Hollywood Fights Back belong not just to film stars and other celebrities, although these high-profile figures were the ones that helped get peoples' attention, but also to average American citizens expressing their concern: if the HUAC’s reach extended to Hollywood, then it could certainly reach their home towns. How far would HUAC go, they asked?

Hollywood Fights Back set out to counter the HUAC and its sympathetic media presence and balance opinions about the ethical and legal nature of HUAC hearings. Yet its ultimate aim was higher. Contributors wanted the hearings abolished and buried so that they could never happen again. The episode concluded with another rally cry and encouraged listeners to consider what the HUAC was doing and to write and condemn its investigation.

N.B. Most contemporary references to Episode 1’s broadcast date list it as 27 October 1947. The disc label for that episode and several newspaper articles from that time show that it was, in fact, 26 October. 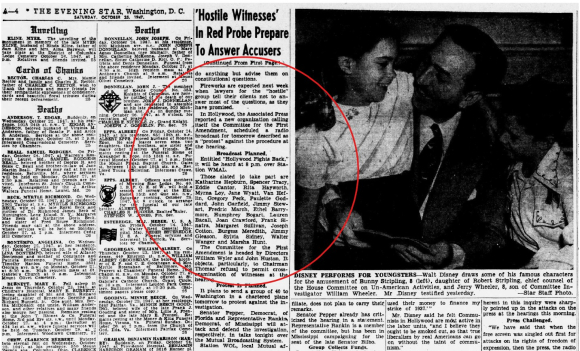 The British Library Sound Archive has physical copies of both episodes:

They are also digitally available for on-site listening.