‘At the chemist’s’ is an early example of a sound recording made for the purposes of teaching English as a foreign language. Recorded in the 1930s by two UCL phoneticians, J.R. Firth (1890-1960) & Lilias Armstrong (1882-1937), it represents a typical conversation in a shop. 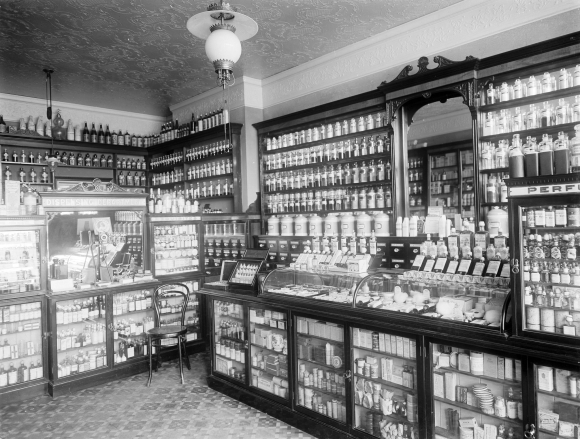 The voices capture period Received Pronunciation (RP), the regionally neutral, middle-class British accent that dominated educational publication and broadcast output in the UK for much of the 20th century. RP is still considered a prestige accent by some, but like any other accent it has changed considerably in the intervening years. Some of the vowel sounds we hear in this recording are now rare in present-day RP – most notably the <a> sound both speakers use in words like madam, packet, bandages and tablets, while the pronunciation of Vaseline with a medial <z> sound is particularly striking.

Compared with modern audio teaching materials (and exchanges in shops) the language also seems extremely formal and the dialogue a little unnatural – the idea, for instance, that students should understand, let alone use, phrases such as compress with arnica and tincture of iodine is fascinating. Nonetheless, anyone with experience of learning a second language will instantly recognise the genre. The recording also offers a glimpse of contemporary pharmaceutical products and terminology. Court plaster – as opposed, simply, to plaster or sticking plaster – is particularly intriguing and J.R. Firth’s endorsement of the brand New-skin ('you see what it is from what it says on the label') bears an uncanny resemblance to the famous 1990s TV slogan for Ronseal wood preserver (‘it does exactly what it says on the tin’). Finally, Lilias Armstrong’s use of good morning as a farewell might seem particularly unusual to modern ears.

Find out more about RP on our British Accents and Dialects website and follow @VoicesofEnglish for tweets about language.

Accents & dialects, Humanities, Recording of the week, Sound and vision