AWATE: Finding Gems and Sharing Them

AWATE joined the British Library this summer as Artist-in-Residence for Unlocking Our Sound Heritage, the British Library’s major project to digitally preserve and widely share the nation’s rare and at-risk sounds. During his five-month residency, AWATE will use the extensive sound archive to weave together a long-form genre-bending musical piece exploring the subject of diaspora and human migration. In this blog, AWATE writes about a live sampling event he participated in at the Library in November. 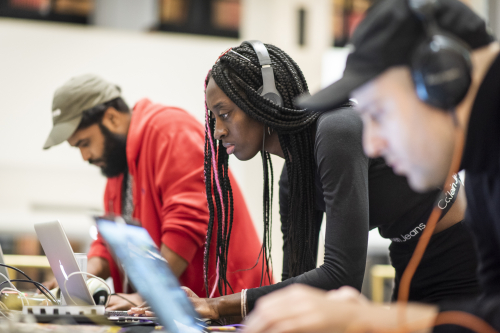 AWATE (left), WondRWomN (centre), and The Last Skeptik (right) photographed together during the live sampling event on 22 November.

There is just so much to listen to. So many amazing stories, pieces of music and other recordings that the British Library sound archive has in its possession. When I find something based on keywords, location, date or category, it’s not enough to simply listen. With access to the rest of the Library and the internet at my fingertips, the fascinating tales that form the context for each of these recordings are added to, thread by thread.

When I was invited to present a Late as part of the Library’s Season of Sound, I had an idea for the format - a taster session displaying some hip-hop production skills - but I needed a recording to centre it around. Wanting to salute the working class arts spaces that were so prevalent in British cities during the first half of the twentieth century, I spent some time researching local music halls. Just in north London, they were seemingly on every high street, many of them having now been converted into pubs, churches, offices or demolished and replaced with luxury apartments that our communities so desperately need.

After searching through the Sound and Moving image catalogue (www.cadensa.bl.uk) and listening to dozens of music hall songs from roughly a century ago (the earliest from 1898), I stumbled upon one that stood out. Many of the songs were witty, comedic, well-orchestrated and thematically strong but this one in particular seemed to be extremely topical and featured a striking vocal performance. 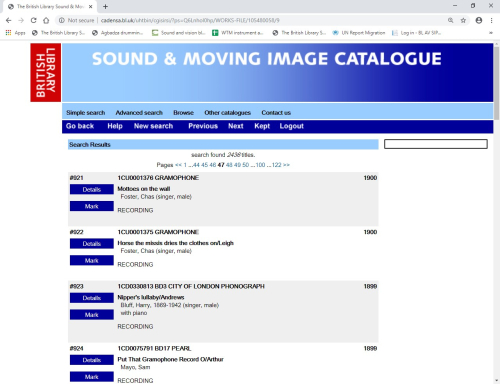 The song, ‘Everybody Loves Me’ by Ellaline Terriss was composed by Guy Jones for a 1907 musical comedy play called ‘The Gay Gordons’. The play was based on a book written by Ms. Terriss’ husband, the notable writer, actor and producer, Seymour Hicks. They were basically the turn of the century version of Jay-Z and Beyonce, in terms of fame. Ellaline Terriss even had an episode of This Is Your Life about her in 1962 and her father, William, was a famous actor in the late 1800s. He was infamously murdered by an envious colleague outside the Adelphi Theatre in 1897 and William Terriss’ ghost has supposedly haunted the Adelphi, as well as Covent Garden tube station, ever since. This is just one example of the kind of magic that is conjured by each item in the sound archive.

After a whimsical instrumental version of the chorus and a militaristic fanfare, Ms. Terriss introduces herself in an assertive falsetto, singing, “I’m a popular chap in London, and I’m always in request”. The songs paints the picture of an adored and rich fellow without a care in the world, attending various social events and receiving praise from every stranger that passes. The chorus, which is in an even higher register, is sung in a tip-toeing delivery for the first two bars, starts off with, “Everybody loves me up in London. Everybody’s very fond of me”. When heard, you have to laugh. 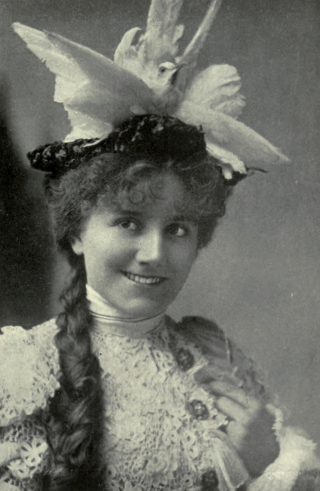 Picture of Ellaline Terriss, the voice of the event and well known artist of her day. Courtesy of Wikimedia Commons.

For the event, titled ‘Everybody Loves Me: A Live Hip-Hop Sampling’, I invited fellow rapper/producers, WondRWomN and The Last Skeptik to make a backing track, using elements from the 1908 recording. In the entrance hall of the British Library, we used music production software on our laptops to chop the sample and find ways to incorporate it into a beat. As Skeptik noted, “It’s like ‘’Ready Steady Cook’ with music.” 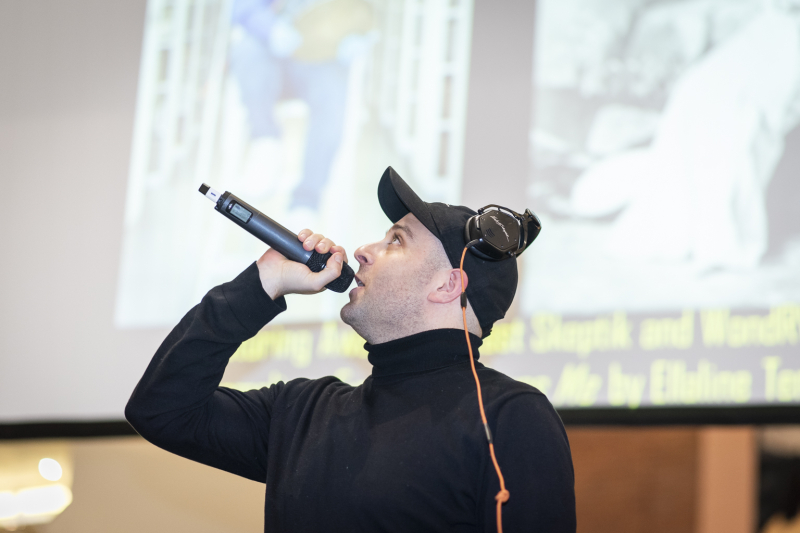 A photograph featuring The Last Skeptik explaining what he did with the sample.

After an introduction that told the brief story of Ellaline Terriss and the song, the audience was treated to the full song, which is not available online or in the public sound archive. WondRWomN, The Last Skeptik and I proceeded to compose our beats, identifying sections to lift, such as the fanfare or vocals from the chorus. The fact that we were making such a racket in the foyer of one of the most famous national libraries in the world – usually a quiet space – was slightly strange, but the audience watched on as the sound switched from laptop to laptop every few minutes as we made progress.

Having different skill sets, the beats that we made were distinctly varied, with a difference in beats per minute (tempo) and feel despite the common main ingredient of the sample. WondRWomN created an early 2000s, Heatmakerz sounding piece that would have suited Cam’ron and The Diplomats perfectly. The Last Skeptik crafted an up-tempo, melodic, house style Kaytranada-ish beat that had everyone moving. I ended up making a mid-90s throwback New York boom-bap beat that I could hear M.O.P. rhyming over.

At the end of our forty minutes, we showcased the final results with explanations of our process and methodology. Before saying farewell, I made sure to plug Skeptik’s new album, ‘See You in the Next Life’ and the fantastic work WondRWomN does at her studio for young people, The Record Shop in Tottenham.

The entire event was fantastic, and the staff and Events team made our role as creatives much easier. Being known mostly as a rapper, it was great to test my production skills live and also bring to life something from 111 years ago that was hiding in the sound archive. My final piece, due to launch in March, will incorporate some of the techniques we displayed at the event and with time quickly running out, I must now return to making that! 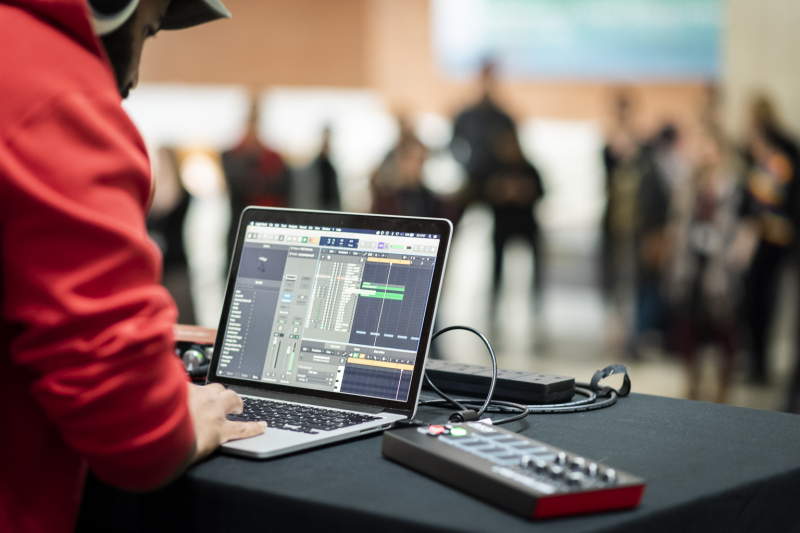 Learn more about AWATE and his residency at the Library

Find out more about Unlocking Our Sound Heritage