This year marks the sixth annual British Library Sports Word of the Year (SWOTY) review. While I can’t claim it’s a major fixture on the annual awards circuit, six does, at least, have some sporting significance: six games in a tennis set; six pockets on a snooker table; and six cricket balls in an over (well until next year’s Hundred, that is). This annual review takes its inspiration from the BBC Sports Personality of the Year (SPOTY) and various Word of the Year nominations. Firstly, then, congratulations to Ben Stokes for winning SPOTY 2019, and to the equally magnificent Dina Asher-Smith for running him close (actually if they’d had to race there might well have been a different outcome!); and to they and climate emergency for emerging as Word(s) of the Year according to Merriam-Webster and Oxford dictionaries respectively.

And so to the ten candidates for SWOTY 2019, selected from a personal scrapbook of words and phrases that caught my attention on broadcast and social media platforms and in the mainstream press during the last twelve months:

January (Marina Hyde reflecting on the European PGA decision to stage a prestigious golf tournament in Saudi Arabia, Guardian Sport): Understanding the wider issue of sportswashing ought not be beyond your ken, either. 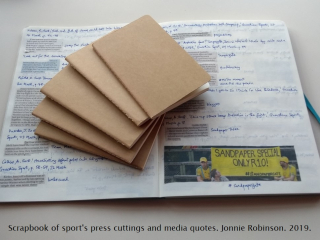 May (Richard Barnes reviewing Tottenham Hotspur’s 2018-19 season, Guardian Sport): Biggest surprise: our ability to find a way in the Champions League against the odds. Very unSpursy.

June (Vic Marks reporting on England versus Afghanistan at ICC Cricket World Cup, Guardian Sport): This made it the six-iest match in World Cup history.

July (Athar Ali Khan analysing bar chart of England’s runs per over versus Bangladesh at ICC Cricket World Cup, Sky Sports): Look at those big overs in the middle Manhattans.

November (Gerard Meagher quoting Siya Kolisi’s comments on the impact of South Africa’s triumph at IRB Rugby World Cup, Guardian Sport): We appreciate all the support – people in the taverns, in the shebeens, farms, homeless people and people in the rural areas.

This year’s list namechecks five sports with one entry each for golf, athletics and rugby union; two for football; and five for cricket. The dominance of cricket can probably be attributed to England’s triumphant World Cup on home soil and to the fact it represents an extremely rich source of innovative and specialist terminology. As ever, the selection illustrates a range of linguistic phenomena and encompasses dialect, slang and jargon; it includes a loan word; and, for the first time, examples of the potential of morphological creativity. Of the ten nominations, seven straddle the blurred lines between sporting jargon (i.e. specialised vocabulary), dialect (i.e. localised variants) and slang (i.e. informal forms): sportswashing, Ciderabad, unSpursy, six-iest, Manhattan, nuffy and trequartista. The other three occupy a similarly undefined position on the dialect-slang continuum but are not restricted to sporting contexts: Noah’s, do bits and shebeen; they qualify, however, as they demonstrate how sporting discourse in the press and on broadcast and social media – especially interviews with athletes, live commentaries etc. – gives vernacular English a mainstream platform.

In the light of increased corporate sponsorship of sport and the expansion to new territories of prestigious international sporting events it’s not surprising that sportswashing [= ‘a strategy whereby a nation or corporation leverages sport to enhance its reputation’] has made the headlines this year. Sport frequently serves as a legitimate tool for soft diplomacy, but sportswashing – recorded in the MacMillan Dictionary from 2018 – describes a deliberate policy of harnessing sport’s popular appeal and wholesome image to deflect criticism from a regime or company’s corrupt or unethical behaviour.

From a British point of view we might justifiably consider nuffy [= ‘person with particular passion/obsession’] Australian dialect, but the Macquarie Dictionary categorises it as ‘colloquial’ and even includes cricket nuffy as one of its examples of typical usage. Likewise, shebeen [= ‘illicit drinking den (esp. in South African townships)’] is classified as South African English in the OED. Both forms demonstrate the ‘World Englishes’ dimension of cricket and rugby as sports predominantly played in Commonwealth countries, as does the initially puzzling Ciderabad [= ‘Somerset County Cricket ground, Taunton’]. This is a wonderful example of wordplay containing multiple layers of cultural reference and requires considerable knowledge of cricket to deconstruct and interpret. Firstly, one needs to know that Taunton and Somerset, in the heart of England’s West Country, are synonymous with cider production and consumption and, secondly, that cricket pitches there have recently been unusually receptive to spin bowling. Finally, one needs to be familiar with cricket in the subcontinent, where pitches – such as the Test ground at Hyderabad in India – are traditionally associated with dry, dusty conditions ideally suited to spin bowling. To capture all that implicit knowledge in a single word is pure genius.

Two entries reveal a similar kind of linguistic playfulness, but rather than exploiting a phonological association, unSpursy and six-iest require imaginative grammatical manipulation. For many years, Tottenham Hotspur – nicknamed Spurs – have played attractive football but ultimately failed to win trophies, despite frequently coming agonisingly close. As a result many football fans, including Tottenham’s own supporters, have adopted the word Spursy [= ‘the tendency to falter when within reach of success’], such that it has attracted the attention of Collins Dictionary. As an adjective, Spursy adheres to normal English rules of derivation so additional forms can be generated. In this year’s Guardian I’ve spotted the noun Spursiness – note the adherence to English orthography in the substitution of a medial <i> for the adjectival suffix <y> – and, here, unSpursy, with its cheeky nod to the non-conformist conventions of e-publishing whereby a capital letter (denoting the underlying proper noun, Spurs) appears word-medially. On the other hand, six-iest [= ‘match with the highest total number of boundary sixes’] is a nonce-formation based on the number six with an unconventional superlative suffix added. The inspiration here is, I suspect, similar idiosyncratic sporting superlatives – to British English speakers anyway – such as US English winningest [= ‘individual athlete/team with the most victories’], but with the additional appeal of a phonological similarity with sexiest, capturing the notion that a game featuring such a high number of risky shots must be the most exciting and glamorous.

The term Manhattan appears to be widely used among cricket statisticians and commentators, and thus probably constitutes cricketing jargon. Modern sports analysis relishes a data visualisation tool and cricket has embraced this technological development enthusiastically. The wagon wheel [= ‘visual representation of direction of batsman’s run-scoring shots’] has been around for some time, but until this year’s ICC World Cup I was completely unaware of the Manhattan [= ‘bar chart showing rate of progress by runs per over’] and its counterpart, the worm [= ‘line chart showing rate of progress by runs per over’]. I’d be intrigued to know if either term is used by mathematicians more broadly. 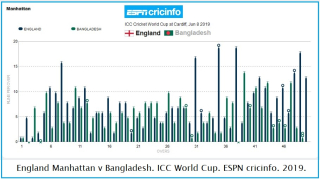 Due to the prominent role played by the British in codifying football, English dominates much of its associated specialist terminology so it’s rare for non-English words to enter football jargon, hence the inclusion here of the Italian loan word trequartista [= ‘attacking midfielder, playmaker’]. The greater presence in recent years of European footballers and coaches in the UK has meant an increased appetite for European tactics and, hence, the vocabulary to describe these innovations. In addition to trequartista, Guardian articles have this year featured the words rondo [= ‘training drill in which players seek to keep possession of the ball in an enclosed space’], regista [= ‘deep-lying midfield playmaker’] and raumdeuter [= ‘player who reads (and exploits) tight spaces’], from Spanish, Italian and German respectively. All three appear in numerous online glossaries of football and – more importantly – in spontaneous conversations about the game among English fans.

Finally, we turn to two slang terms: Noah’s and do bits. The former confirms our enduring enthusiasm for rhyming slang – Noah’s is, underlyingly, Noah’s ark [= ‘dark’], but the conventions of rhyming slang dictate that the rhyming element (ark) is omitted. Green's Dictionary of Slang records Noah’s [= ‘lark, prank’] from 1891; [= ‘park’] from 1924; and (in Australian English) [= ‘shark’] from 1963, but has no record in this sense, while the New Partridge Dictionary of Slang and Unconventional English (2006) records Noah’s ark [= ‘dark’] from 1934 – coincidentally including a citation from 1992 in a cricketing context. The endlessly productive and light-hearted nature of rhyming slang explains its continued appeal. The quote from Daryll Neita, by contrast, is a fantastic example of current British urban slang: do bits [= ‘to do well, to succeed’] is first recorded by Green in 2017 – Dary’lls use of G [= ‘term of praise’] in the same breath, by the way, is also cited from 1991.

All of this year’s entries are captured in The British Library’s Contemporary British collections, making the Library an incomparable resource for anyone interested in monitoring vernacular language. And so to the winner: well … my head tells me it should be sportswashing as I sense sports governing bodies should respond to calls for greater social responsibility, but hey – it’s Christmas – so I’m going with Ciderabad. Because it’s brilliant. 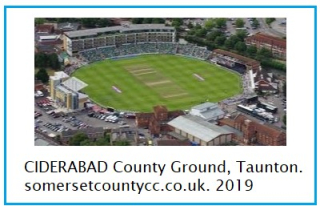 Posted by Jonnie Robinson at 10:08 AM