Recording of the week: Kagura - dancing for the Gods

The origin of dance in Japan can be traced back to the age of the gods and the Japanese kagura can be considered a prototype of all Japanese rituals.

Kagura combines dance with music and theatrical elements; it is both a ritual and an artistic expression for the kami (Japanese Gods) within the mythical narrative. [1]

Dance was a central element in many Japanese rituals and ceremonies, both within the courts and rural areas; especially in the latter, dance was the predominant element of folk religious festivals.

The heavenly kagura originated in northeastern Japan, in Iwate prefecture, and represents the origin of most genres of dance. Kagura is a collective term which refers to different schools of performing arts; it embodies a shamanic tradition in which the gods come dancing to infuse divine energy on people. The group figure of 12 performers also embodies a symbolic significance:

Thus, the kagura group of 12, with all these layers of meanings so typical of Shugendo systems, symbolically constitutes the whole universe and the whole of existence: Time, Space, Heaven, Earth and Humanitiy, based on Shintō, Taoist and Buddhist thought[2]. 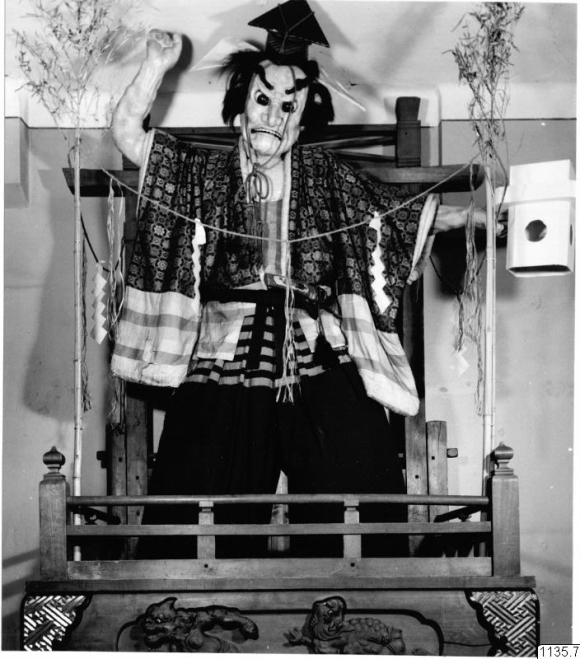 The performers travel around the countryside bringing their blessing of prosperity and protection to the local people. Dance is therefore seen as a way to communicate and perpetuate religious tradition; in particular, the emphasis is on the aesthetic aspect of the dance.

Kagura, a flower-hat dance, lion dances and masked dances [3] played a central role in the theatrical arts during the Muromachi period (1333-1615), a time characterized by emperor rivalries. Despite its turbulence, the Muromachi period was a time of great musical potential; a material and psychological build up for a flood of activities that was soon to burst upon the artistic world in a torrent of color and sound[4].

The first kagura ceremony can be traced back to the year 1002 and falls into the category of shamanistic practice[5].  We can divide Kagura into two subcategories: mi-kagura, the court music formal part of Shinto functions, and sato-kagura, which was mainly folk music.

The dance style of kagura consists of performances of approximately 15 mins, and a bamboo pipe (kagura-bue) is one of the common instruments used during such performances; kagura can also be intended as a proper musical genre. [6]

The study of the kagura focus on both the artistic side and religious aspect of this practice. As religion may differ from one culture to another, also a definition of dance as performative art only can lead to a simplistic approach.

It should be remembered that the Japanese view all their traditional performative, theatrical, dance and ritual forms as springing from the same source: the original kagura performance in Heaven[7].

Special thanks to Lyrichord for granting us permission to feature this recording.