A Life Lived and Seen: a tribute to Anna Teasdale

The Bath-based landscape artist and long-time art tutor Anna Rose Frances Teasdale, has died aged 88. For those fortunate enough to have studied with her, or to have spent time with her (as I did, when I recorded her life story for Artists’ Lives, National Life Stories), she was a magical, extraordinary woman whose loss makes the world a meaner place. 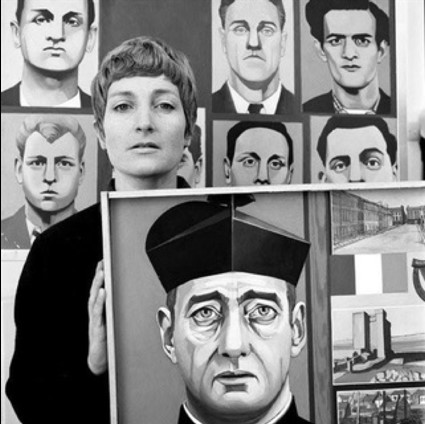 Anna Teasdale never received proper recognition for her painting practice. She certainly enjoyed sharing her pictures, but she was driven to paint not by career ambition, but by an innate need to practice, and she viewed the art market with unease. Anna was honest about the project of living, and her art, she used to say, came out of her life. Reflecting on the trajectory of her work, she observed that ‘it was almost as if I had made a covenant with the future’. Indeed, her life story recording is all the more compelling because, as a social document, it offers rare insights into the condition of being an educated, working-class, figurative, woman artist in mid-twentieth century England—when none of those attributes gave you a start in life. Because Anna was visually astute, her observations often have a sharpness of focus: ‘It’s not what a thing looks like, it’s what it is, and when you find out what it is, you know what it looks like’. She saw the order underlying the landscapes she painted, and this understanding ran alongside her Catholic faith—a close concert between the seen and the unseen that imbued her landscapes with myriad emotions. In her view, the process of painting takes the painter through the gamut of emotions, and, like an afterimage, the memory of these emotions remains within the painting; she experienced life from the solitude of the easel, ‘because it all happens’ in the process of seeing.

Anna’s life intersected with many of the century’s important British artists and movements, yet she proudly remained out of step with them all. She was unusual for a woman of her generation and means because she sustained her painting practice throughout her life. For Anna, painting was not a choice, but a fundamental necessity—‘the only thing I could do’. Anna was unconcerned with, and suspicious of, contemporary art; its quest for new forms of expression and conceptual underpinnings seemed to stray from the ‘true faith’ of figuration. For her, painting was almost a spiritual act, her own inner resource that gave shape and meaning to her life. As she wrote a few months before her death: ‘I am jogging on trying to be kind and helpful! My painting is going well but slowly and is still the joy of my life. I look at my painting and climb into it and tranquility (and terror) take over.’

Anna ran away from a penurious and abusive childhood home as a teenager to follow her dream of attending art school. Enduring poverty and sometimes homelessness, she enrolled at St. Martin’s School of Art, where she displayed a rare facility for drawing and subsisted by working as an art school model and living (illegally) in a semi-derelict bomb site. By the end of the 1950s, Anna had met and married fellow student and rising art star, Robyn Denny, and for a time, Anna became an integral part of the Swinging Sixties art set. Among her closest friends in the early days were Pop painter Peter Blake and abstract Pop painter Richard Smith, as her bohemian life settled into a more secure round of art world gatherings. Beside her husband’s glamourous accolades (Denny represented Great Britain at the Venice Biennale in 1966), her achievements were modest, but they were real: by the mid-1960s her paintings were included in exhibitions at the Arthur Jeffress Gallery and the ICA among others.

When Robyn Denny was lured to the West Country by the offer of a lucrative teaching position at Corsham, Bath Academy of Art, in the mid-1960s, Anna and Robyn bought a Georgian town house in Bath which was frequented by a coterie of successful artists who relocated from London to Wiltshire (their friends included Howard and Julia Hodgkin, Joe and Jos Tilson, Richard and Betsy Smith). Anna continued painting when she could, supporting her famous husband and juggling the domestic demands of motherhood.

When Denny left his young family, Anna was again plunged into self-reliance and financial straits, but always used her art to sustain herself and her two children: entrepreneurially if informally, establishing an art school in her own home—‘The Seymour Road Academy’, as she wryly referred to it. Anna understood the fundamental differences of approach behind her and her husband’s approach to art making: ‘I drew and he thought’, she demurred. In her reflection upon these different modes of art making, Anna defines the schism that shaped contemporary art in the second part of the twentieth-century.

A close friend reflected on Anna’s life with the clear-eyed observation that ‘she lived a rackety life’. But a bit like the rhythmic structures that order and shape her landscape compositions, her life’s outward racket concealed an inner order, strengthened by the twin pillars of faith and humour. She did not withdraw from her artistic commitment even when pinned by duty; she took heart in an aesthetic view of life that allowed her—almost incomprehensibly today—to see motherhood not as an obstruction but as an extension of the creative life. Considering one of her landscapes, she noted what is a fitting epitaph: ‘it was a whole life painting this picture’.

Hester R. Westley interviewed Anna Teasdale for Artists’ Lives in 2016-2018. The full life story interview is available for researchers at the British Library and can be found by searching C466/379 at sami.bl.uk

Posted by Charlie Morgan at 5:12 PM