Recording of the week: Trude Levi and Holocaust liberation

Today marks Holocaust Memorial Day, as well as the 75th anniversary of the liberation of Auschwitz concentration camp. The National Life Stories oral history project ‘Living Memory of the Jewish Community’ includes many Holocaust survivors describing their experience of Auschwitz and of liberation. In this recording of the week Oral History Archivist Charlie Morgan looks at the testimony of Trude Levi. 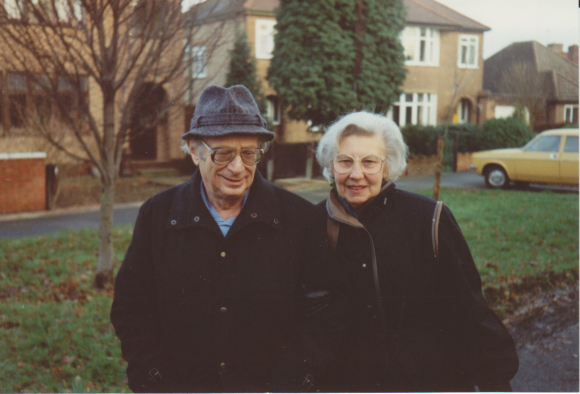 Gertrude Levi (1924-2012) was born in Szombathely, Hungary, the daughter of a Hungarian father and an Austrian mother. Her parents were Jewish, irreligious, and socialist; her father, a gynaecologist, would perform abortions without payment at a time when this could land you in prison. Trude describes Szombathely as “the most antisemitic town in Hungary”, and when Hungary joined the Axis Powers in 1940 life became increasingly difficult for the Levi family. Then in March 1944, fearful that Hungary would abandon the war effort, the German army invaded Hungary.

Prior to 1944 Hungary had passed antisemitic laws, deported thousands of Jews, and been an active ally of the Third Reich, but it was after the German invasion that a concerted attempt was made to implement a ‘Final Solution’. In July, when Trude was twenty, she and her parents were forced into a ghetto, then to a local concentration camp and finally were placed onto a cattle truck and transported out of the country. On 7 July 1944, they arrived at Auschwitz; Trude was immediately separated from her parents and never saw them again.

When it became clear the Allies would win the war, the Nazi regime committed itself to ensuring as little evidence of the Holocaust remained as possible. Trude, like tens of thousands of others, was placed on a death march to Riesa, a town in Saxony, and around her the war effort collapsed:

“Anyway, I didn't, I think I didn't want to die by that time, I mean, the, not that I wanted to die before, but I didn't care. But by that time I, I decided that I really would like to survive, because, I mean, the Russians were here, the Americans were here, you heard them, you knew that it was the end, and you saw the Germans fretting, and so you knew it was the end, so now that was the point where you felt, "Well, there is no point in dying any more. And we won. So, one should remain alive. But I couldn't go on, I couldn't walk on in spite of it, and I knew that I would be shot, but they didn't shoot me, they said, "Dies keine Kugel mehr wert" - "She's not worth a bullet any more", and so they left me on the road, next to the bridge.”

After dragging herself away from the road, Trude managed to hide in a barn before she was liberated by Allied troops. In this recording of the week Trude explains some of complexities of liberation; she was adamant that she would not return to Hungary, but “somehow we were still in Germany”. Furthermore, even though she had escaped from German troops “I wasn’t yet sure whether it was really the end,” and although smoking a cigar “was freedom… I think the real freedom came when I arrived in France, when I felt that I was out of Germany”.

Trude Levi’s story of liberation is different to other survivors of Auschwitz, but her sentiments are common. While liberation is often presented as a singular, joyful moment it was in reality a lot more complicated and harder to pin to one specific point in time. Trude’s oral history is just one way in which Holocaust survivors have been able to express these experiences in their own words, and even after her death her testimony remains.

Trude Levi was interviewed by Gaby Glassman for Living Memory of the Jewish Community in 1989, and she is featured on the online web resource ‘Voices of the Holocaust’. Her full life story interview can be found on sami.bl.uk, and can be listened to in Reading Rooms at the British Library in St. Pancras or Boston Spa.

Posted by Andrea Zarza Canova at 11:23 AM