Recording of the week: Elgar's Introduction and Allegro

This is an extract of a recording of Introduction and Allegro by Edward Elgar from 1940. Like many recordings in the Stuart Pollard Collection, it is an off air recording of a performance by Arturo Toscanini and NBC Symphony Orchestra. The piece is well known but that is not what made it get stuck in my head. Even from the first couple of seconds I recognised it and it triggered memories from my earlier life as a musician. I had not listened to the piece in nine years but it instantly felt so familiar again, hearing it in this new context, as part of this collection.

This piece featured prominently in my life during my final school year when I was 17–18 years old. This was a year of lots of change and stress but the constant in my life was my involvement with the local music trust and especially the chamber orchestra. We rehearsed Elgar’s Introduction and Allegro almost every week during that year and played it in several concerts in the UK and then Finland. The piece became so familiar to me that I formed a love-hate relationship with it. It was one of the most challenging pieces I had played at that point in my career. Despite the intense training at the music trust, I still felt insecure with particularly challenging parts of the piece such as passages in which semiquavers were passed intricately between both violin sections. I especially remember some delicate moments regarding those semiquaver passages at the Temppeliaukion Church (Rock Church) towards the end of our tour in Finland. 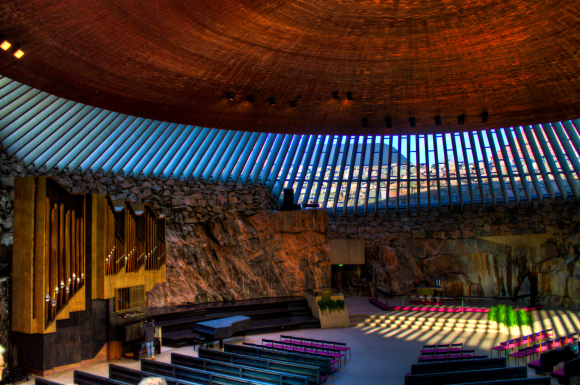 A particular memory comes to mind when hearing this piece. I had innocently turned up to the first rehearsal of the year with my viola but on arrival I was told ‘wrong instrument’ and was shocked to find that without knowing it I had been appointed as principal second violin. I had to play the conductor’s violin on that day and the sudden change of plan made finding the concentration to sight read the Elgar very difficult. Being principal second violin added new pressures such as responsibility for starting the fugue. This became one of my least favourite parts of the piece and I was often very stressed by it because of the challenge of setting a good foundation for this part of the piece and for stopping everyone from rushing. Memories of my experience with Introduction and Allegro were triggered instantly on hearing the recording in the Stuart Pollard Collection but they intensified on hearing the fugue so that is why I selected an excerpt of the fugue to share this week.

Having changed careers by gaining work experience and studying to become an archivist over the past three years, my time as a musician can start to feel distant. I had a great commitment to music so it can feel strange to no longer have such close connections with it. However, working at the British Library is a positive experience because discovering pieces like Elgar’s Introduction and Allegro in the collections of the Unlocking Our Sound Heritage project enables me to link what I am doing now to the childhood hobby that gradually took over my life.

Posted by Andrea Zarza Canova at 11:05 AM