Recording of the week: 'If Not, Not' 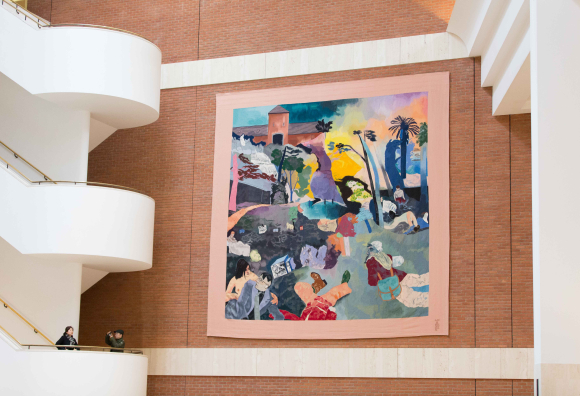 You may be familiar with the tapestry featured in this photograph if you visit the British Library every now and then. If its bright colours and mysterious symbolism haven't lured you in before, it’s a tapestry based on the painting If Not, Not (1975—1976), by the artist Ronald Brooks Kitaj RA (1932 – 2007), which hangs in the National Gallery of Modern Art in Edinburgh. For me it has been a source of wonder and stimulus on countless wanders through the Library’s public areas, leaving me with many questions on what the man with the hearing aid in the lower left hand corner, the large, brick gatehouse in the upper left corner or the general atmosphere, which is both attractive and ghastly, might mean. It has felt like an endless source of ideas and stories when procrastinating away from my desk and it's led me to dig deeper and uncover more about R.B. Kitaj's life and remarkable work.

The tapestry rendition of If Not, Not was commissioned for the British Library by its architects MJ Long and Colin St. John Wilson, who were good friends of Kitaj’s. Kitaj painted their portrait The Architects, in August 1979, to celebrate the remodelling of his home by MJ Long. A book called Kitaj: The Architects, gathers diary entries and fragments of conversation from their sitting sessions.

The tapestry was woven on a bespoke loom at the Dovecot Tapestry Studio by the Edinburgh Weavers Company, it required 112 kilos of wool and 7000 hours to complete. Seven master weavers worked on different areas of the tapestry to create this impressive rendition measuring approximately 7 square metres. It was the largest tapestry to be woven in Britain in the 20th century. It was funded by the Arts Council of England Lottery Fund and others.

For Colin St. John Wilson, works of art were an integral part of the building’s design and not mere decoration: 'Tapestries and sculpture are absolutely part of the building, not afterthoughts or adornments to prettify it' (Independent). When the tapestry went on display in July 1997 (its original spot was on the opposite wall where the large exhibition poster currently hangs), its textural qualities not only contributed to the character of the space, serving as a contrast to the hard surfaces throughout the area, but also benefitted the space acoustically by absorbing the sound echoing and reflecting throughout the entrance hall.

In the following excerpt from a much longer interview, which is part of the National Life Story Collection: Architects' Lives, we can hear Colin St. John Wilson speak about some of the references woven into the tapestry's complex network of symbols. He also talks more broadly about the importance of visual imagery in public buildings and how the Library's readers might relate to the works on display.

This tapestry will be one of the many artworks featured in a series of site-specific tours which explore the Library’s public art collections through sound. Following David Toop's idea, as fleshed out in his book Sinister Resonance (2010), that it is possible to imagine a sound world within ‘mute things’, the tour guides have used sound recordings from the British Library Sound Archive to draw out or expand the stories within works by artists such as Barbara Hepworth, R.B. Kitaj, Eduardo Paolozzi or Antony Gormley. You can find more information on how to book yourself on to a tour on the British Library’s event page.