Many birds are a dab hand when it comes to singing their name and the Whip-poor-will (Antrostomus vociferous) is no exception. This nocturnal bird inhabits woodlands stretching from Canada to the southern United States and, due to its perfectly camouflaged plumage, is more likely to be heard than seen. 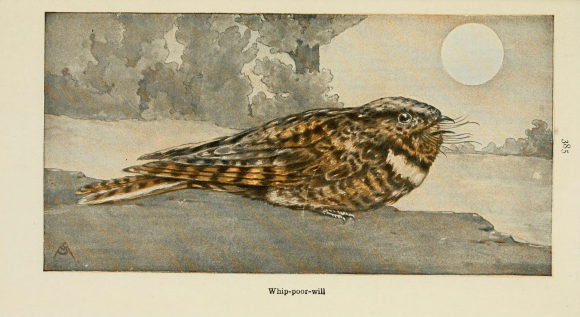 Whip-poor-will illustration taken from Field Book of Wild Birds and their Music, 1921 (courtesy of the Biodiversity Heritage Library)

This particular recording was made near the Canadian village of Kirkfield, Ontario in 2003 by Tom Cosburn.

Other birds with onomatopoeic tendencies can be found within the library’s online collection of wildlife and environmental sounds. And if you’re looking for somewhere to start, why not give the Cuckoo a try.