Waves and resonances: Catherine Smith's adventures in the sound archive

The British Library has been very lucky to have Catherine Smith volunteering with our World and Traditional Music team over the last year. As part of Unlocking Our Sound Heritage, Catherine worked closely with various collections of sound recordings made on the African continent, classifying musical instruments featured in several of the recordings using an adaptation of the Hornbostel–Sachs classification system. More recently, Catherine curated and delivered sound tours responding to artworks on public display in the Library. These tours focused on the lives of three artists and how themes from their works draw on their associations with music, sea and landscape.

Looking forward to the second round of sound tours, which kick off on Tuesday 4th February, we sat down with Catherine to hear more about her volunteer work and explore the thinking behind her sound tour, Waves of Resonance.

Last year, you catalogued a recording of Nigerian hammer and anvil music, which turned out to be the 100,000th recording digitised by Unlocking Our Sound Heritage. Have you made other discoveries in the sound archive since?

I particularly enjoyed working on Peggy Harper’s Nigeria Collection, which contains that hammer and anvil recording. I’ve listened to an incredible range of material in the archive: from Vaughn Williams’ ethnographic wax cylinders to Hungarian-Romanian folk recordings. The British Library also has an extensive collection of recordings from WOMAD festival throughout the years which, as you can imagine, is infinitely long and eclectic.

I was also fascinated to find an interview with blues and boogie-woogie pianist and singer Champion Jack Dupree, where he is simultaneously accompanying himself on the piano beautifully.  It was great to be able to feature this in an article for the Library’s Sound and Vision blog as ‘Recording of the Week’.

I’ve also been fascinated by the Wildlife and Environmental collections, whether it be Alan Renton’s meticulous collection of lighthouse fog warning signals in Cornwall or a Bluethroat imitating reindeer bells in Lapland.

That blog on Champion Jack was an excellent read; he certainly led a remarkable life. As well as writing on sound archive collections, you contributed recordings to the autumn themed listening session we held in the Knowledge Centre. Could you tell us about some of these sounds?

I had a great time searching the archive for recordings which engaged with the theme of Autumn from as many cultures as I could find. I included recordings from Nigeria, Ghana, Thailand, Nepal and China. Perhaps the most amusing recording I found was from the Peter Kennedy Collection, where Joe Woods and his sister Winifred talk about their local traditions on the Isle of Man and the legends of ghosts and witches and sing traditional Halloween songs.

You’ve not just been working with sounds, though; you’ve also been inventorising loose photographs in the World and Traditional Music Collections. Can you tell us more about this work?

Yes, that was a long but interesting task. I went through all of the files for the Unlocking our Sound Heritage World and Traditional Music Collections to check what photos were there and update the inventory. I took a while going over and checking everything to make sure it was accurate and consistent, but it was incredible to discover some stunning photography as well as some unusual finds. It all opened my eyes even more to the incredibly diverse range of collections in the sound archive.

Have you come across any images that have struck you?

The most surprising photograph I found amongst the Unlocking Our Sound Heritage collections was probably this surreal picture of the Male Choir of the Moscow Choral Synagogue (aka. ‘The Moscow Jewish Choir’). It accompanies a recording of their concert from 1993 at the New West End Synagogue in St Petersburg Place, London. The concert was called 'Kindling the Night: a celebration of Russian Chazanut and Jewish music', and included an international selection from Yiddish folk songs to classical and liturgical repertoire. 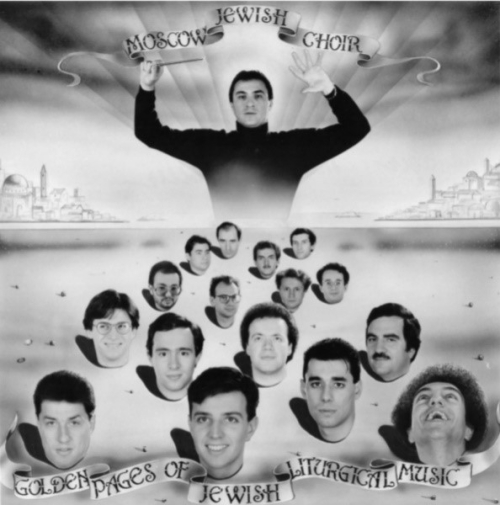 The origin of the photo is unclear, but it looks like it might have been an album cover for the ‘Golden Pages of Jewish Liturgical Music’. Despite its bizarre Daliesque style, with their heads popping up out of the ground, funnily the choir was only established in 1990!

Outside of UOSH, there is also a beautiful collection of photos that came with the John Brierley Botswana collection, and that led me to discover his wonderful sound recordings which are available to listen to on British Library Sounds.

Can you tell us about Waves of Resonance, the sound tour you curated as part of the Unlocking Our Sound Heritage outreach programme? You develop many interesting connections between sound and a sculpture by Barbara Hepworth, a bust of Virginia Woolf and others on your tour. How did you go about bringing these elements together?

I started with some background reading from David Toop’s book ‘Sinister Resonance’, following the brief that Andrea Zarza Canova, my manager and World and Traditional Music Curator at the Library, had created for this project. I was interested in the way he explored the haunting nature of sound and the sense of hidden sound that is within artwork, objects, writing and space.

The selection of artworks for the tour came about almost like a moment of serendipity, despite considerable hours researching the public artworks on display in the British Library. I was drawn to Hepworth’s sculpture as a piece of abstract art and recalled a connection to both the sea and Cornwall. I had already selected the bust of Virginia Woolf due to her many connections with music and sound but was delighted to realise that her links to the sea were also deeply rooted in the geography of Cornwall. This triggered an infinite discovery of connections between the two artists also drawing upon their musical and sound inspirations. The decision to then incorporate the Scottish artist Ian McKenzie Smith’s seascape became an obvious choice because it unravelled further connections to the sea and music. I really enjoyed selecting sound recordings to connect with the artworks. I use the sounds as a way in to discover more about the background of the artists, their work and inspiration, as well as changing the way you experience the artwork in the moment. For example, Ian McKenzie Smith was inspired by American colour-field painters, traditional Eastern artwork and Zen Buddhism, so I accompanied the painting with a meditative bagpipe drone composition by Yoshi Wada. Before playing that piece, I used a Shakuhachi flute imitating the sound and motion of waves breaking. They’re two very different pieces, but both were effective in bringing out different visual elements and themes contained in the painting.

I had the chance to attend one of your delightful tours last time round. There were strong themes of the sea, bodies of water, and wave motion present. What is it about these that fascinates you?

I spent most of my childhood holidays by the sea in Pembrokeshire and Cornwall and have always been drawn to the coast so I can relate to how the sea was so inspiring to the artists featured in my tour. I’m constantly fascinated by the latest discoveries within marine life, and like many people, I’m concerned about the damage to our oceans. While composing the final project for my Music BMus (Hons) degree at City, University of London. I became fixated with endless cinematography of coral reefs. This broadened out to editing footage and composing music for a film exploring various life cycles within the sea, from phytoplankton to whales. The project set out to explore the physicality and materiality of this habitat, but I used a strange combination of sounds to do so, including instruments and field recordings that I digitally manipulated into a textural composition. The imagined sound of a coral reef dying actually incorporated a combination of granular synthesis and hydrophone recordings, including some made in my very own bath!

What was the audience response like the first time you delivered your sound tour? Have you made any changes to it this time around?

People were incredibly engaged and responsive, which was encouraging. I had to really streamline it to fit all the interesting content into the half-hour slot, so I’ve removed some material and sounds from the original version of the tour. I tend to do a lot of research, and the tour could have been over twice as long. I’ve gotten more comfortable delivering it as I’ve gone along and the tours turn out a little different each time because everyone has their own response and areas of interest in relation to the works of art and recordings, so it’s really interesting to get different perspectives on the works. If I curate any more tours, I might have to be more careful about the placement of the artwork because the Hepworth sculpture is in front of the smoking area! I somehow didn’t realise that until I was doing my first run-through. I’ve probably left a few confused smokers wondering why a group of people were huddled around a sculpture communally listening to a Nigerian harvest dance.

Join Catherine and Jasmine Pierre for site-specific sound tours of the British Library and hear about the ideas behind some of the public art on display.

What you see is what you hear.

Posted by Adonis Leboho at 7:00 AM

Technorati Tags: Save Our Sounds, Unlocking Our Sound Heritage, World and Traditional Music