Jose Manuel de Prada-Samper is a researcher and writer with an expertise in mythology and folklore. Since 2011, he has been recording and investigating the culture of Afrikaans-speaking Khoisan descendants living in rural areas in the Western Cape and the Northern Cape provinces of South Africa. In March 2018 he carried out field work focussed on music with the support of the British Library. Jose Manuel's previous field work had been devoted to understanding and documenting narrative traditions and oral histories.

The Jose Manuel de Prada-Samper Collection has recently been made accessible at the British Library though until Reading Rooms re-open, readers won't be able to access the videos that make up this collection. For now you can browse Jose Manuel's detailed catalogue entries on the Sound and Moving Image catalogue under collection number C1760. As an introduction to the collection, Jose Manuel has written a guest blog post about his encounters with the ramkie instrument in his field work.

In October 2012, while on a field trip, at a lovely restaurant and junk-shop that has the unlikely name of Williston Mall, in the South African Karoo town of that same name, my wife Helena and I saw a magnificent ramkie made of wood. The price was very affordable, so the temptation to purchase it was strong, but since my wife and I were about to return to Spain in December, after more than two years living in South Africa, and had plenty of things to pack, I finally decided to give up the beautiful instrument. Of course, it was not long before I regretted that decision.

A year and a half later, in April 2014, another field trip brought me again to Williston. Of course, at the first opportunity Helena and I went to the mall with some hope that perhaps the item we had not bought in our previous visit would still be there. Stranger things have happened to us in the Karoo. But just as we were asking one of the owners of the place about the ramkie, I saw it hanging from one of the walls, among other not-for-sale items. Fortunately, noticing our disappointment, our interlocutor said he was going to give, rather than sell, us another ramkie, and soon we had it in our hands. 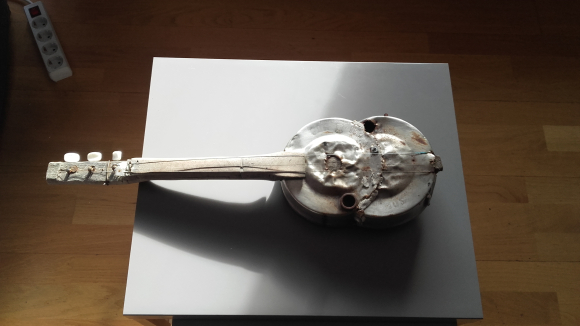 Ramkie made with a primus stove, given to the author in Williston

Made from the tanks of two Primus stoves, the instrument is a fine example of the Karoo folk luthiers’ ingenuity for making the most of whatever is at hand. I would rather have had the other one, but this was certainly an excellent consolation prize. By then, the ramkie had become for me more than a mere curiosity, since it featured in some of the most intriguing stories I had been recording in the Karoo and neighbouring areas. More on this later.

The ramkie is a string instrument similar to a guitar. According to the eminent musicologist Percival R. Kirby, in his monumental book The Musical Instruments of the Indigenous People of South Africa (first published in 1934), the name comes from the Portuguese rabequinha, meaning “a little violin”, and the instrument “shows traces of Portuguese influence”. The earliest mention of the instrument, Kirby writes, comes from the 18th century German author O. F. Mentzel, who lived in the Cape from 1733 to 1741. Mentzel attributes a Malabar origin to the ramkie, but according to Kirby “it is either definitely of Portuguese origin, or else a hybrid instrument”. It was soon adopted with enthusiasm by the Khoisan servants of the European colonisers. Originally made using as a resonator a calabash to which a wood handle was attached, as described by Mentzel, it normally had three or four strings which were plucked, not bowed. Different accounts by early travellers suggest that variations in the material used for the resonator appeared early on. In recent times it is usually made with a 5 litre oil can, hence the name of blik kitaar, “tin guitar” in Afrikaans, by which it is also known.

When in March 2018 I undertook a field trip to the Olifants River Valley and parts of the Upper Karoo, one of my main objectives was to find out if the instrument was still alive among the rural, Afrikaans-speaking communities of those areas, most of whose members descend from the original Khoisan inhabitants of that part of southern Africa. I wanted to record, if possible, people playing it, to film the making of one and even bring at least one to the British Library if I was fortunate enough to obtain it.

In the event, what I could mostly do was gather memories of the instrument, yet memories that, to my surprise, were of not so long ago. The majority of the musicians I interviewed were middle-aged people who now played the guitar but had learnt music in their youth by observing a parent, a relative or a friend play the ramkie. At some point, many had made their own instrument, usually with the 5 litre oil can.

The very first person, my assistant Patrick Hanekom and I interviewed, had learnt to play in this way. He was Alfred Basson, of Clanwilliam, who had grown in the Heunnigvlei area of the Wupperthal Mission, in the Cederberg Mountains. Mr. Basson has won several prizes at rieldans competitions and is an accomplished guitarist. Using just three strings from his guitar he gave us a glimpse of how the ramkie sounds, and offered to make one for us. We jumped at the opportunity, but on our way home after the recording session Patrick told me he doubted Mr. Basson could finally make good his offer, for the simple reason that the 5 litre oil cans are nowadays almost impossible to come by. And sadly, that was what happened.

The ramkie people remember is the one made with the oil can. It had from 3- to 4 strings, normally made from fishing-line, although some people mentioned a more archaic material: sheep-gut. From what we were told by several of the people we recorded, it appears that really affordable guitars became available in the area around the 1980s, and they have gradually replaced the ramkie. There are, however, still many people around who know how to make and play this wonderful instrument.

Although Oom Dawid de Klerk (born in 1944) of the farm Kriedowkrans, showed us a related instrument, the blik viool or tin violin, which he couldn’t play for us for want of a bow, Patrick and I were not able to see a really traditional ramkie during this field trip. The closest we got was in the Sandveld town of Graafwater, west of Clanwilliam, where a wonderful musician, Ephraim Kotze, with whom we had a most stimulating conversation, showed us an electric ramkie he plays occasionally while performing with his band. He played the instrument for us acoustically, since he lacked an amplifier at the moment. The sound was unlike the guitar, but this ramkie had six strings and the fretboard and other additions to the blik were certainly not made of recycled material.

We asked Ephraim about a local character called Dirk Ligter, about whom many stories are told in this part of the world. Ligter was (and for many still is) an unbeatable sheep-thief, who stole and slaughtered the sheep of the farmers without ever being caught. He is reputed to have supernatural powers, among them that of being so fast that he could outrun any horse. More wonderful still, is his gift of being able to transform into virtually anything: an anthill, a broom, a bush…

Ephraim told us that he knew about Ligter, but couldn’t tell us any of the narratives himself. This was not surprising, because the Sandveld is somewhat outside the usual range of this legendary sheep-thief, whose natural territory lies to the east and north of the Sandveld, and encompasses most of the Bokkeveld, Cederberg, Tankwa and Hantam Karoo areas.

The reason I was asking about this character during my fieldwork in March is because, in addition to being a master sheep-thief, Ligter was also an accomplished ramkie player. As was to be expected, his instrument was not an ordinary one. Patrick’s father, Petrus Hanekom, of Algeria, a village in the Cederberg Mountains, told us that when Ligter felt like listening to music he just had to hang the instrument somewhere and say “Elom!”, and the ramkie played on its own. 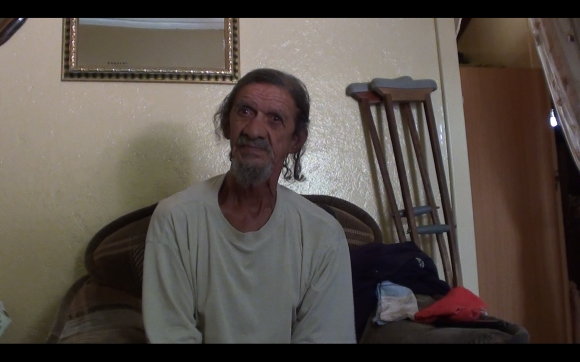 It was from Oom Petrus from whom I first heard that Dirk Ligter never stole from the common people, just from the farmers. Yet there was an exception: once he stole a ramkie from a labourer. Oom Petrus remembered only this far, but we got a few more details from his brother-in-law, James Zimri, whom we went to visit next. Besides being an excellent harmonica player, Oom James is also a storyteller and of course he knew about Ligter. Among other things, he told us the specific farm at which Ligter stole the ramkie, and also that the instrument in question was broken, and Ligter mended it. Yet, again, he could not go beyond this. The rest of the story, however, is in all likelihood still there and I hope to be able to record it in the near future.