Arabic music record sleeves and what they can tell us

Hazem Jamjoum joined the British Library Qatar Foundation Partnership Project in April 2019 as Gulf History Audio Curator and Cataloguer. In this blog post he explores what record sleeves have helped him learn about the early 20th-century music industry in the Arab world.

For some decades, the British Library's sound archive routinely discarded shellac record sleeves. The sleeves were flimsy paper envelopes, not particularly suited for protecting the discs. Over time, the paper disintegrates into dust that lodges itself into the grooves on the discs and interferes with playback. To make matters worse, moving discs in and out of old crumbling sleeves without damaging the paper can be quite a delicate task. That said, the sleeves have much to offer researchers, which is why many archives such as the British Library's sound archive now keep the sleeves, and resources permitting, invest the time, effort and hard drive space to safeguard them as digital images. In this piece, I hope to share some of what I have learned by examining shellac record sleeves from the early twentieth century mashriq (Arab East) by focussing on the story of one particular company, Baidaphon.

Baidaphon was founded around 1906 by six cousins from the Syrian-Lebanese Baida family, with one group of brothers living in Beirut, and the other group, in Berlin. The centre labels printed on the company’s early records tell us a great deal, but it is the sleeves that the company begins to use after WWI that I aim to examine here. Baidaphon sleeves from the 1920s, some of which were accessioned into the British Library’s collection through a gift from Emile Cohen and Ezra Hakkak, seem to have been standardized with a revealing message to customers:

'In order to reduce the expense to our generous clients living in American, Australian and African regions, and to ensure timely delivery of goods, we ask that orders be henceforth sent directly to our Berlin shops at the following address: Pierre & Gabriel Baida - Berlin Mittelstraße 55.' 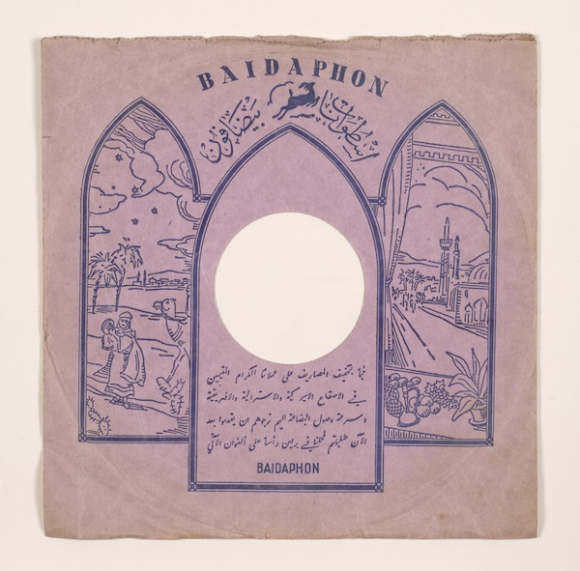 Fig 1. Baidaphon record sleeve from the 1920s instructing customers outside the Middle East how to order from Berlin.

Beyond informing us that the company’s Berlin showroom was no more than a ten-minute walk from the Brandenburg Gate, the note to the customers also gives us a sense that much of the company’s business was conducted through mail orders, and that a growing proportion of these orders came from the massive Greater Syrian (and other Arabic speaking) diasporas across the Americas, Australia and Africa. By the time of the Great Depression, Baidaphon was a company operating on a global scale.

At the end of the 1920s, Baidaphon signed the most vaunted of Egypt’s twentieth century singer-songwriters: Mohammad Abdelwahhab. This was a major milestone in the company’s competition with its larger rivals, so much so that it produced a special sleeve for recordings of Abdelwahhab’s songs. Printed at the bottom of the front face of these sleeves was a photograph of the young composer in a tuxedo and tarbūsh (fez), identifying him in Latin script as 'Prof. Mohamed Abdel Wahhab', with Arabic script at the top going into flowery prose that described him as an 'artistic genius' and 'musician to kings and princes'. The back of the sleeve had the now-familiar instructions to the tri-continental diaspora to send their orders to the company’s Berlin headquarters.

Within the same period, the company began producing records by Elie Baida, son of the Beirut-branch’s Jibril Baida. Elie was a musician in his own right, renowned for his mastery of the Baghdādi style of mawwāl, a virtuosic vocal performance, invariably performed a cappella or with minimal instrumental backing, and often serving as a sentimental introduction to a song. Elie was soon dubbed the 'king of the Baghdadi' and later moved to the United States, where he lived for several decades until his tragic death in 1977. The company produced a near-identical version of the special Abdelwahhab sleeve, with the photo of Elie in place of Abdelwahhab’s though without the florid encomium.

The company’s investment in such sleeves gives us a sense of their marketing strategy at the time. Beyond relying on brand recognition, the company had moved into highlighting the considerable celebrity of its recording artists, such as Abdelwahhab and Baida, to appeal to buyers and listeners. 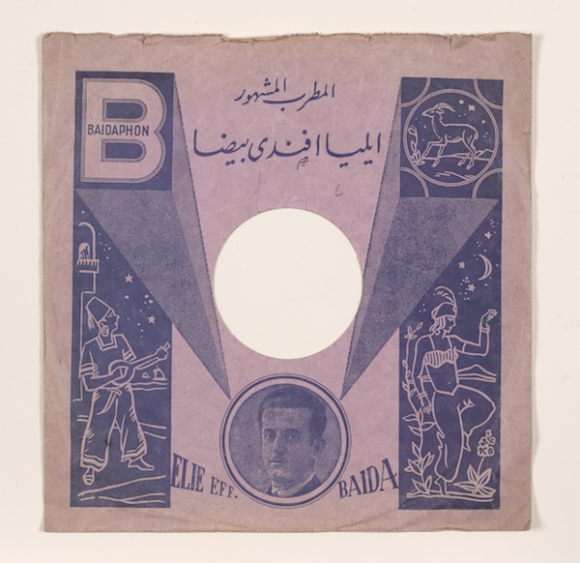 Sleeves also have much to tell us about Baidaphon’s response to the Great Depression, and the death of one of the company’s founding shareholders, Pierre Baida. It appears that the company aimed at restructuring in such a way that parts of the company focussed on particularly lucrative geographic areas were reconstituted as new companies. The most important of these restructuring manoeuvres were those affecting its operations in Egypt, where the Egyptian branch of the company was repackaged in the 1930s as an entirely new label: Cairophon. Though quite minimalist in comparison with the Baidaphon sleeves of the same period, the earliest Cairophon sleeves mark the connection between the two companies quite clearly. With one side in Arabic and the other in French, the sleeves state the new company’s address as 34 Rue Mousky, which matches that of the Baidaphon Cairo showroom in the 1920s. Furthermore, the new sleeves clearly state that Cairophon belonged to the 'heirs of Pierre Baida and their partners.' The new partner in question was none other than the most recent addition to the company’s roster of recording artists: Mohammad Abdelwahhab. 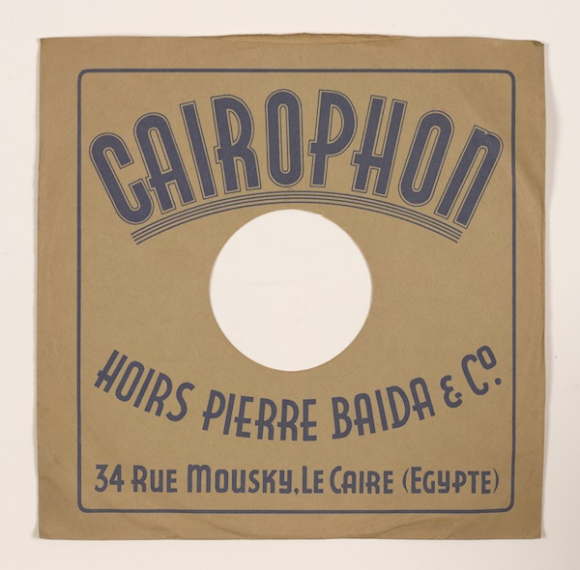 Another shellac disc sleeve that joined the British Library collection through the Cohen and Hakkak gift helps us see yet another connection between Baidaphon and the expansion of the recording industry in the Arab world, albeit in a somewhat roundabout way. Likely dating from the late 1940s or early 1950s, this is a Cairophon sleeve with text exclusively in Arabic, except for the company’s new logo which features its name above a landscape sketch of the Giza pyramids and palm trees. 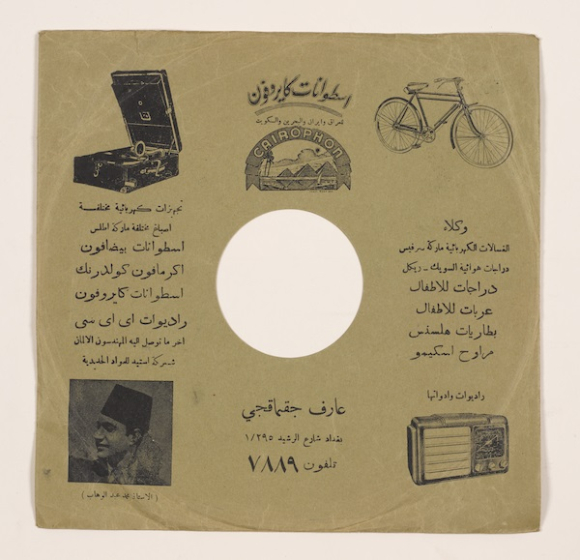 Above the logo, and underneath the company name in Arabic, are the words 'for Iraq, Iran, Bahrain and Kuwait', a clear indication of the expansion of the company’s business throughout the Arabo-Persian Gulf region. The right and left columns of the busy sleeve feature images of a bicycle, a transistor radio set and a portable record player. The text on either side is an eclectic list of items sold by the producer of the sleeve, including record players and discs, dyes, washing machines, fans, batteries, and children’s bicycles. Centered on the bottom of the sleeve are the words:

There is much to say about al-Rasheed Street, the Chakmakchi family and the role of both the street and the company in Iraqi musical life. For now, it suffices to say that the Chakmakchis’ electronics store in the middle of the most musically significant street in Baghdad soon added a recording studio to its operations, creating the label Chakmakchiphone which was unparalleled in recording, popularizing and preserving the maqām and rīfī repertoires of Iraq. Though the British Library collection includes nearly one hundred Chamakchiphone records, currently being catalogued and digitized under the British Library Qatar Foundation Partnership Programme, sadly not one of the company’s sleeves has made it into the collection.

One such undated sleeve in the collection of the Arab American National Museum shows that the phone number for Chakmakchiphone was the same as that of the electronics (and children’s bicycle) retailer appearing on the Cairophon sleeve, but that the company had taken over different storefronts along Rasheed Street for different aspects of its operations. It also shows that they had expanded these operations to Mosul. The Cairophon sleeve itself tells us that the Egyptian company contracted the Chakmakchis to operate as their agents in the Arabo-Persian Gulf, and suggests that this partnership was very likely an important moment in the development of the Iraqi recording industry given the centrality of Chakmakchiphone in that development.

Historians of recorded sound rightly lament the loss of primary source material resulting from the destruction of record company archives. The Odeon company headquarters, for instance, were destroyed in the 1944 Allied bombing of Berlin, and Baidaphon’s was burned down in the 1987 during civil war in Lebanon. In our thirst for any tidbit of information, such seemingly useless ephemera as disc packaging take on all the more importance as sources through which to reconstruct the histories of music production around the world. I hope I’ve managed to show some of the ways in which this is the case, and perhaps encouraged those who have such objects in their possession to photograph and share them, and perhaps consider donating them to a nearby library or archive.

This post was written by Hazem Jamjoum, Gulf History Audio Curator and Cataloguer for the British Library Qatar Foundation Partnership Project (BLQF), which produces the Qatar Digital Library. Follow @BLQatar, @BL_WorldTrad and @soundarchive for all the latest news.