From Dick-dick-the-devil to Pan-pan-boolala: onomatopoeic identities of the Crested Bellbird

A few months ago the onomatopoeic call of the Eastern Whip-poor-will was featured in the sound archive’s Recording of the week series. Listen to the voice of this North American nightjar and it’s easy to see how the standard common name, at least in its English form, is a direct reflection of the Whip-poor-will’s call.

Things aren’t always this obvious though. Sometimes, to get to the best names, you need to look past contemporary naming conventions and spread the net further afield.

This is where the Crested Bellbird comes in. Usually found in the drier habitats of the Australian mainland, this familiar songbird has both a look and a voice that is instantly recognisable. 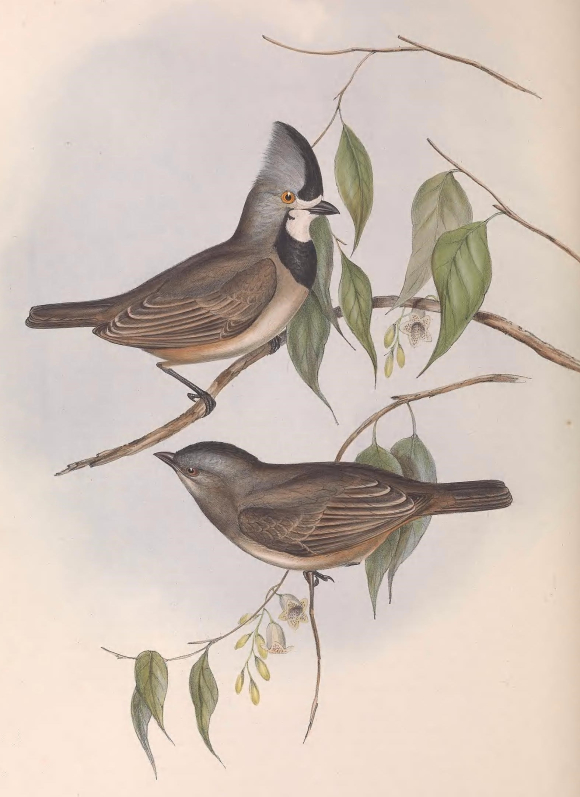 Illustration of the Crested Bellbird (Oreoica gutturalis), published in The Birds of Australia, John Gould, London, 1848.

The song of the male Crested Bellbird consists of 5 notes that are repeated several times in quick succession before a pause. It begins with two slow notes which are then followed by three faster notes. The ‘bellbird’ aspect of its widely used common name refers to the bell-like nature of these notes, but doesn’t offer any real help when it comes to trying to memorise the song. For this we have to turn to the past.

A name that was commonly used amongst European settlers who travelled to Australia was Dick-dick-the-devil. Looking back even further, most of the colloquial names given to this species by Aboriginal communities are onomatopoeic. Kanpanparlala, Pan-pan-boolala and Barn-barn-bu-lala are just a few examples.

The following recording is a classic example of the Crested Bellbird’s song. It was made by Vicki Powys in Finke Gorge National Park in Australia's Northern Territory. Though the general song pattern remains the same, the singing male varies the speed, loudness and key as he goes along.

Though ‘Dick-dick-the devil’ is a personal favourite, it’s interesting to note just how effective and indeed accurate all of these names are in representing the Crested Bellbird’s song. They all work, despite their differences. So why not have a go at coming up with your own onomatopoeic name for this little songbird. You never know, it might just stick.