Recording of the week: The Kankurang or how to enforce a lockdown

The Kankurang is a Mandinka masked figure from the Senegambia region, associated with male societies and more specifically with boys' initiation ceremonies. It is a protective figure and an enforcer of rules, but, as masked figures go, the Kankurang is also pretty scary. It is uncannily tall, entirely covered in strands of red bark, and faceless. As it roams the streets at night, it brandishes and strikes together two machete knives, letting out a blood-chilling, high-pitched cry from time to time. 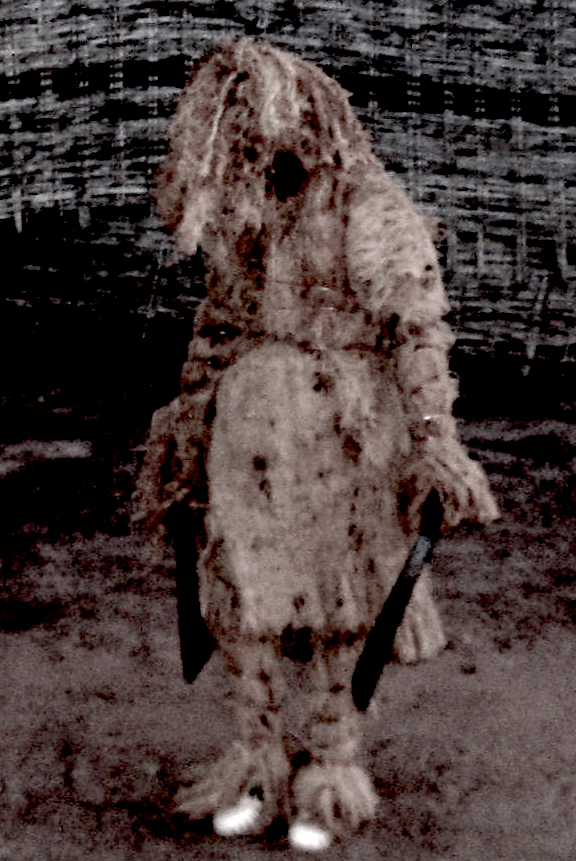 Photo by Dorothy Voorhees, licensed under cc-by-sa-2.0 / cropped and desaturated from original

Only a few initiates know the identity of the person hiding inside the costume; and besides, it doesn’t matter much because, once the costume is donned, the man, as it were, disappears and the Kankurang takes his place.

The whole point of the Kankurang is that you do not want to run into it, because although its role in society is useful and ultimately positive, the Kankurang is dangerous. It often roams accompanied by a small group of stick-carrying young men, the Kankurang’s followers and helpers, who can administer punishment on its behalf, and many a person has been beaten just for being in the wrong place at the wrong time.

'When the mask roamed the streets at night, cooking fires were extinguished, lights were switched off, and women wouldn’t leave their homes” (De Jong 2001: 14).'

This frightening masked figure makes its appearance at liminal times, during the change of seasons, around the time of boys’ circumcision ceremonies. After an extended period away from home, the newly-circumcised boys return from the bush school to their families, where they undergo a period of enforced rest while they heal and get ready to re-enter society as adults. It is important that during this time the boys stay indoors, and the Kankurang is a very effective means of ensuring their lockdown. The temptation to sneak outside to play is easily vanquished when one hears the piercing cries of the Kankurang coming from the street.

From the late 20th century onwards, there has also been a new kind of secular Kankurang mask. Especially in urban environments, at Christmas time and other secular traditions during the dry season, it is not uncommon to see an almost playful Kankurang dancing in the street during broad daylight, with children watching on and laughing rather than running away in terror. However, in spite of this new, more benevolent masked figure, many bear witness to the fact that the real, sacred, dangerous Kankurang still exists. You may not find it in the cities and big towns, but out in the countryside and around the smaller villages, where the dark stillness of the night still hasn’t been conquered by electricity, its knives still clang menacingly.

This week’s recording is a rare aural document of the 'real' Kankurang, made in The Gambia by music researcher and producer Lucy Durán. What follows is the sound recording and her account of the circumstances surrounding the recording of this rather strange piece of audio.

It was the spring of 1986 and I was on my way to Mali with journalist James Fox. We were staying in Brikama, in The Gambia, at the house of my friend Dembo Konte, a well-known kora player. It was late at night and we were sitting in Dembo’s courtyard, chatting. The boys of Brikama had just got back from the bush school after circumcision. At some point, I heard a strange clatter coming from the street outside the compound. I mentioned this to Dembo who, after listening for a second, changed his smile to a frown and almost froze. He then got up and urged us all to go inside and lock all doors and windows. Initially, I thought he was playing a trick on us, but I soon realised he really was scared, and so I got scared too because it seemed that whatever it was that was making those sounds (and it was getting closer) was genuinely dangerous. And so, not knowing what I was running from, I ran inside with the others, went to my room and hastily closed the window and locked it. I then realised that the thing was right outside my window. I could hear metallic noises, a whirring sound like that of a bullroarer,* and strange, high-pitched cries. My portable recorder was just there, so I picked it up and started recording, while Dembo kept signalling us to stay quiet and not make any noise. Only after it was gone I learnt from Dembo that the creature outside our house was the fearsome Kankurang.

*The eerie whirring sound, clearly audible on the recording, is produced by a bullroarer called ngarankulo, also associated with boys’ initiation ceremonies. It was probably operated by one of the Kankurang’s followers.

Many thanks to Lucy Durán for allowing us to share her recording and for all the background information provided. The Lucy Durán Collection has been digitised as part of the British Library's Unlocking our Sound Heritage project.