The Santals, Scandinavian missionaries, and salvage ethnomusicology: an encounter of three worlds

Since 2015, Christian Poske has conducted his PhD research on the Bengal recordings of the Arnold Bake Collection. A Collaborative Doctoral Scholarship from the Arts and Humanities Research Council UK, situated his PhD within two institutions: the British Library Sound Archive and SOAS, University of London. He conducted his fieldwork in Jharkhand, West Bengal, and Bangladesh from April to October 2017, revisiting the locations of Arnold Bake’s fieldwork. Christian's fieldwork investigated the aims and methods of Bake’s research in the early 1930s and studied the continuity and change in the devotional and folk music and dance documented by Bake. Christian is completing his PhD in Music this year at SOAS and in addition to his research has been engaged as a cataloguer for the Unlocking Our Sound Heritage project. He currently works as Bengali Cataloguer at the Department of Asian and African Collections at the British Library.

The audio recordings from the Christian Poske Collection have recently been catalogued and will be available for on-site listening at the British Library when the Reading Rooms re-open. For now, those interested can access the descriptions of the recordings by browsing the Sound and Moving Image catalogue for catalogue entries under collection number C1795. This blog post written by Christian Poske is an insightful introduction to the collection through his fieldwork in Jharkhand and West Bengal.

The restudy of historical sound recordings often gives unexpected results. During my research on the cylinder recordings of the Dutch musicologist Arnold Bake (1899-1963) at the British Library Sound Archive, I came across a number of sparsely documented recordings made at a Christian mission for the Santals, a South Asian aboriginal people centred in the Indian state of Jharkhand today. When I conducted my fieldwork in 2017, I found out that one of the church songs recorded by Bake is still popular among converts in the region.

'Recently, I had the opportunity to start recording Santal music… To really get in touch with the Santals, I have turned to the currently most important authority in this field, Dr Bodding... However, he is a missionary, and as he helped me along, we arrived at a huge boarding school for Santals. But it looks worse than it is. The mission has the policy to change as little as possible. Language, music and customs are, if anyhow possible, retained. All melodies used in the church are pure Santal melodies, although the words were made Christian... The music as such is quite unlike Hindu music, and their whole musical sense is very different. They love polyphony a lot when they get to hear it. I have recorded a sample (which hardly has any scientific value) how the Santal singing master of the school edited a song with four voices without actually ever having a European education, he does not speak a word of English, for example. The boys sing it with passion, which you could never expect from the Hindus…'
(Arnold Bake, letter to Erich M. v. Hornbostel, 15.4.1931, Berlin Phonogram Archive)

With these words, Bake explained his fieldwork at the Kairabani mission to Erich M. v. Hornbostel (1877-1935), the director of the Berlin Phonogram Archive. The Norwegian missionary Paul Olaf Bodding (1865-1938) of the Santal Mission of the Northern Churches had arranged Bake’s visit to Kairabani. 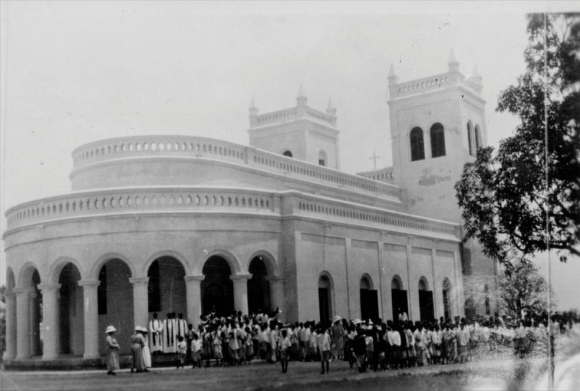 In the letter to Hornbostel, Bake referred to the church song 'Boge gupi do' ('The Good Shepherd') that had been composed by the Norwegian missionary Lars Olsen Skrefsrud (1840-1910) around 1886 (Gausal 1935: 70). Skrefsrud, one of the founders of the Santal Mission of the Northern Churches, settled in India to make sustained efforts to convert the Santals from animist belief to Christianity. He learned Santali language from 1867 onwards and published the first comprehensive grammar of the language a few years later (1873), which introduced a romanisation system providing the language with the first standard script that is still used by converts today, with minor amendments made by Bodding. 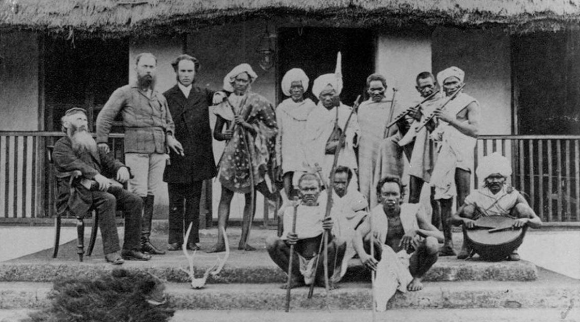 Bake recorded solo and choral renditions of the song 'Boge gupi do', which is based on a traditional Santali melody, as he correctly noted. However, the choral version had not been arranged by the Santali choir leader of the Kairabani mission, but by an organist of the Santal Mission of the Northern Churches (Rạṛ Puthi 1929: preface).

Arnold Bake’s views on the Santals and their music and dance were influenced by colonial ethnographic clichés of aboriginal peoples that he replicated in his correspondence and publications (Bake 1936-37: 68), where he portrayed the Santals as a natural and pleasure-loving people, fond of music, dance, and drinking, and overall in a half-civilised state. One month after his visit to Kairabani, he filmed Santali dances at a Hindu festival in the village Kankalitola near Santiniketan. In a letter to his relatives, he described what he had seen in Kankalitola as 'a real nature dance':

'I am so curious what you will think of the films from Kankalitola that we left behind in Calcutta last week to reproduce. It was the typical male and female dances. You will see, I think, why the missionaries are against this dancing, it is very sensuous, yet it has great charm… And so entirely unaffected, a real nature dance.' (Arnold Bake, letter to his mother-in-law, 20.5.1931, Mss Eur F191/8, 191)

In Kairabani, he photographed Santali pupils playing their instruments at the mission, but he seems to have been dissatisfied with the sober ambience of the premises. To also have a picture of a Santali musician in a natural environment, he probably arranged a photo with one of the musicians outside: 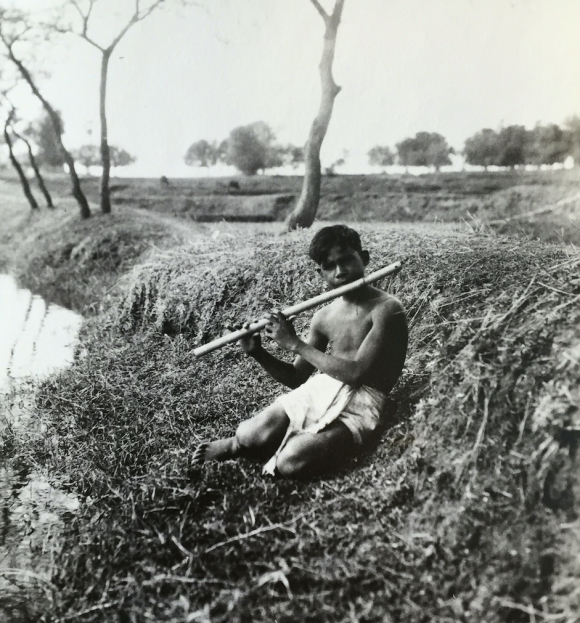 In this period, Hornbostel and other comparative musicologists collected recordings from musicologists and ethnographers worldwide at the Berlin Phonogram Archive 'to save what can be saved' of the traditional musics of the world threatened by the spread of Western culture (Hornbostel 1904-5: 97). Such recordings were expected to be made in surroundings free from European cultural influences. Therefore, Hornbostel marked all of Bake’s recordings from the mission as “worthless” (Ziegler 2006: 101-2), notwithstanding whether these featured traditional Santali or Christian songs. The reason for Hornbostel’s drastic measure was his suspicion that exposure to western church music had affected the Santals’ renditions of their own traditional songs. In his reply to Bake, he only hinted at his reservations:

'I am already very excited about the recordings and hope that you will have more opportunity for interesting recordings... of the Santals. In general: the more you record, the better, provided that the music is not europeanised yet.'
(Erich M. v. Hornbostel, letter to Arnold Bake, 5.7.1931, BPA)

When I began to evaluate Bake’s recordings at the British Library Sound Archive in 2015, I could not distinguish traditional from Christian songs among the Kairabani recordings due to my lack of knowledge of Santali language. Through my fieldwork, I was able to find out more. In Jharkhand, I visited the Kairabani mission school that still exists today. Here, I met the Santali language teacher Ignatius Besra, who helped me with the evaluation of the recordings at his home in Dumka. As he recognised the song 'Boge gupi do' (C52/2128), he rushed from the desk in the living room to another room to bring the church song book Sereń Puthi. He showed me the lyrics and said it was a 'hit' still popular among converts today. When I left, he gave me his copy on the way. I visited the Kairabani mission for the last time the following day and asked a schoolteacher to sing the song for me:

Mansaram Murmu, a doctoral researcher from Visva-Bharati University, translated it for me in Santiniketan two months later:

Carrying out fieldwork with Bake’s recordings showed me the advantages of reconnecting cultural heritage communities with historical sound recordings that are insufficiently documented. Apart from the ethical imperative of making recordings from the colonial period accessible in countries of origin again, community engagement often brings valuable information to light that makes it possible to enhance the archival documentation of recordings, which ultimately makes the material more meaningful to everyone.

This blog is derived from my PhD research “Continuity and Change: A Restudy of Arnold Adriaan Bake’s research on the devotional and folk music and dance of Bengal 1925-1956”, funded by the Arts and Humanities Research Council UK, Award No. 1664039.