Recording of the week: Barbara Kruger in conversation 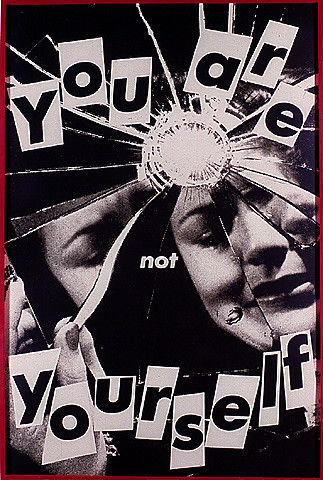 Listen to a recording of visual artist Barbara Kruger in conversation with the art historian Griselda Pollock at the Institute of Contemporary Arts (ICA), London,1991.

‘I shop therefore I am’.

‘Your body is a battleground’

In addition to her photographic and collage work she makes large-scale immersive installations covering all areas of the exhibition space. She also creates works on film and video.

Kruger has exhibited both outdoors in public spaces and indoors in galleries and museums. Some of her more recent creations include the design of the cover of the New York Magazine pre-election issue (2016 USA elections), published on the 31st October, showing a closely cropped image of Donald Trump’s face overlaid with the word 'LOSER'; an installation entitled Untitled (Skate) at the Coleman Skate Park in New York in 2017; and in 2018, a large-scale mural painted in the colours of the Argentinian flag covering an abandoned grain silo in Puerto Madero, Buenos Aires, Untitled (No Puedes Vivir Sin Nosotras / You Can’t Live Without Us).

Barbara Kruger started making art in the 1970s leaving behind a successful career as a graphic designer for magazines such as Mademoiselle. She first exhibited in London at the ICA in 1983. Later in 2014, she had a large solo exhibition Untitled (Titled) at the Modern Art Oxford Gallery, and her next show, set to open at the Art Institute of Chicago this November 2020, Thinking of You. I Mean Me. I Mean You, is expected at the Hayward Gallery in London, in 2021. This will be her biggest exhibition in 20 years, featuring four decades of her work.

In this 1991 recording at the ICA she talks about the importance of making art that is accessible to everyone and why she challenges being called a feminist conceptual artist:

‘I’ve never felt myself defined or defined myself as a maverick girl, feminist artist, and nobody was searching for women artists to take up, you know. Perhaps they are beginning to do it now in NY, but we made our presence known and forced the issue. No one was looking for us, in fact they were looking the other way’ (20:59).

This recording is part of the ICA collection C95, available online on British Library Sounds. It is made up of 889 sound recordings of talks and discussions with prominent writers, artists and filmmakers, which took place at the Institute of Contemporary Arts, London, between 1982 and 1993.