Recording of the week: Barnacle geese at Mersehead Reserve

Human imagination has often shaped colourful tales. Superstitions are born from the indescribable and the unexplained. Even the call of seals has been woven into legend and folklore, transforming into sightings of mermaids, sirens and selkies.

Birds, similarly, have not escaped this fate.

For instance, consider the Barnacle Goose, a medium-sized goose with a white face, black neck and striped back. Strangely, it shares its namesake with the Goose Barnacle, an organism with which it seems to share barely anything else. How did this come to be?

Due to their appearance, it was once believed that these geese were born from the barnacle. The shells, discarded from the rocks after a storm, were taken as a sure sign that a goose had hatched.

Much of this myth was believed as fact – documented in studies of nature – and stemmed from confusion over what a Barnacle actually was.

For instance, rather than nests on driftwood and rocks, John Gerard’s Great Herball from the 16th Century illustrates a barnacle tree that bore geese. Gerald of Wales also described in his Bestiary how barnacle geese develop in the water and hang from trees, enclosed in their shells, until they could grow feathers and fly. 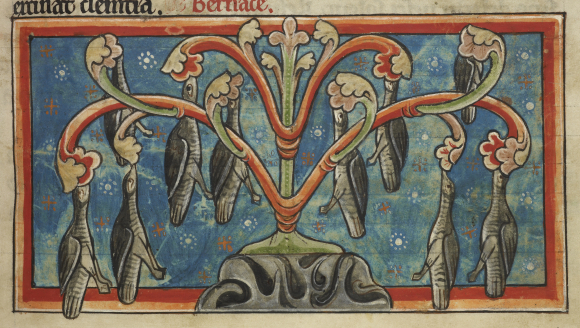 Later Edward Heron-Allen’s book, Barnacles in Nature and in Myth, describes how this legend was used to the advantage of meat lovers. On fast days, meat is not usually allowed to be consumed. However, some claimed that because the goose was not born from an egg it was perfectly acceptable to be eaten during times of fasting. Many were dubious of this claim.

The real secret of the barnacle was eventually revealed by Dr. J. Vaughan Thompson through his research in the 1830s, which showed what barnacles actually were and how they develop. However it doesn’t stop this white and black striped goose from sharing its name with the barnacle.

This recording was made by Richard Beard, at Mersehead Reserve, in 2005. Discover more superstitions around the sounds from our shores on the British Library’s Coast website.

Contemporary Britain, Recording of the week, Save our Sounds, Sound and vision, Sounds of our Shores, Wildlife sounds