Recording of the week: The secret song of the skylark

Birds are much like people when it comes to using sound to express themselves. Some are measured and mellow while others go at it hammer and tongs.

The Eurasian Skylark (Alauda arvensis) is a songster that firmly believes in sonic bombardment. Not that this is a bad thing; its complex song is an almost continuous stream of beauty that has been enjoyed by humans throughout the ages. Though pleasing to our ears, the skylark’s sweet song is actually a lucky byproduct of evolution. 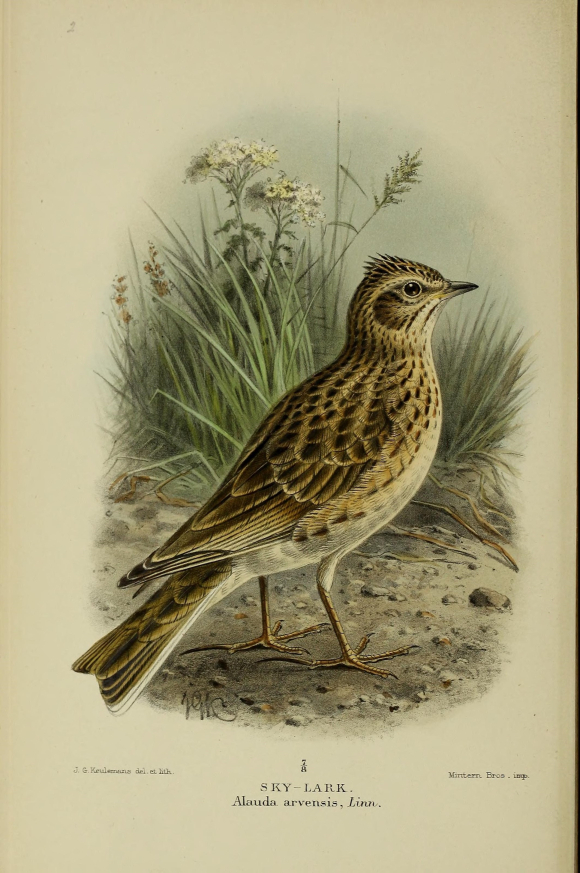 Eurasian Skylark colour plate from Coloured Figures of the Birds of the British Islands, Vol 4, issued by Lord Lilford, London 1885-1897 (via the Biodiversity Heritage Library)

During the breeding season, males use their songs to attract potential mates. Speed, stamina and complexity act as indicators of fitness and help females decide who to settle down with. Sadly our ears are not designed to fully process the vast amount of information contained within these aerial serenades but, thanks to technology, we can get a little closer to the detail. How do we do this? By slowing things down.

The following clip contains both the normal song of a skylark and a slowed down version. The original was recorded by Alan Burbidge on the Hebridean island of North Uist during May 1997 (BL ref 145065).

Slowing down a skylark's song