Recording of the week: Lubaina Himid and Griselda Pollock in conversation (ICA, 1988)

Listen to artist Lubaina Himid in conversation with the art historian Griselda Pollock, recorded in 1988 at the Institute of Contemporary Arts (ICA), London.

The discussion focuses on the impact of feminism in visual arts in the 1970s and early 1980s. It also addresses the under-representation of black women artists in the history of feminist art practice. There is a Q&A at the end of the talk, which includes remarks by artist and writer Maud Sulter, who started the Blackwomen Creativity Project in 1982. 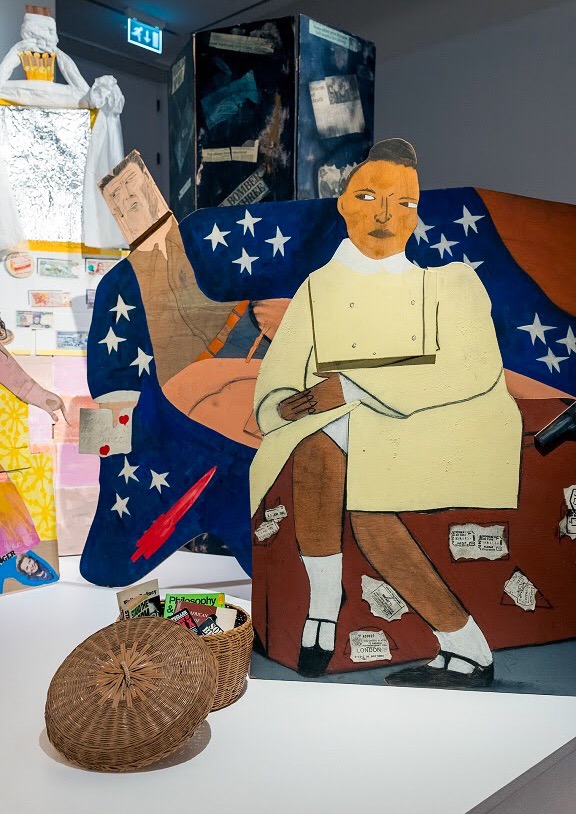 Griselda Pollock introduces Framing Feminism: Art and the Women’s Movement 1970-1985. This is an anthology of essays she has co-edited with Roszika Parker, documenting feminist art practices in the UK.

The book includes press releases, newspaper articles and reviews from events and exhibitions of the time. It became a seminal text in the discipline of art history in the UK. Lubaina Himid argues that the book, and feminist art history, is white-female-dominated and lacks a meaningful inclusion of black women artists:

I don’t really know that much about publishing really, except that I find that I can’t find myself - myself meaning ourselves: black women – in books very much written by black women, saying the things that we want to say, and that chronicle our experience as we had it.

Lubaina Himid MBE, CBE, is an artist, curator, writer and Professor of Contemporary Art at the University of Central Lancashire. She trained as a theatre designer followed by an MA in Cultural History at the Royal College of Art. Her dissertation title was Young Black Artists in Britain Today (1984).

Himid won the Turner Prize in 2017 and has exhibited all over the world. Her work is in major public collections, such as Tate Britain, the Victoria & Albert Museum and the Arts Council Collection.

Since the start of her career she has both made art and curated exhibitions. She was a leading figure in the British Black Arts Movement of the 1980s and 1990s, and helped bring public attention to her generation of black women artists.

In her 2006-2007 interview for the British Library, National Life Stories project Artists’ Lives she said:

‘We wanted to shift how we as black people were seen in the world - and we were using art to do it.’

Himid works in painting, drawing, installation and printmaking. She makes art to open up conversations about race, gender, class and to ‘fill in the gaps of history’. Through her work, she reclaims the histories and contributions of black people in the history of Europe from the colonial times to the present.

‘We made art to make ourselves visible, to be part of a bigger history.’

She has created projects to challenge the representation of black people in the media and culture, such as the Guardian series. She also has reached out to institutions and archives to influence the inclusion of artists of colour in their collections.

At the time of this 1988 recording at the ICA, Himid had already curated four exhibitions of black women artists and had had two solo exhibitions.

This recording is part of the ICA collection C95, available online on the British Library Sounds website. It contains 889 talks and discussions held at the Institute of Contemporary Arts, London, during the period 1982-1993, featuring leading writers, artists and filmmakers.

Making Histories Visible. An interdisciplinary visual art research project based in the Centre for Contemporary Art (School of Art, Design and Fashion) at the University of Central Lancashire (website).

Posted by Andrea Zarza Canova at 10:04 AM