Recording of the week: Ganapati, mythology and Koh-i-Noors: a poetry reading by Debjani Chatterjee

To celebrate the first official South Asian Heritage Month in the U.K., running from July 18th to August 17th, we are sharing the beautiful poetry of Debjani Chatterjee (1952-), an Indian-born British award-winning poet, children's writer, storyteller, editor and translator.

Having joined the Library earlier this year as an Audio Project Cataloguer, the first recordings I began working on were from the vast and impressive Poetry Society collection. It comprises well over 400 items, including reel-to-reel tape, DAT, Betamax and compact cassette, which are being digitised as part of the sound archive’s Unlocking Our Sound Heritage project. The Poetry Society collection includes a diverse range of poetry, prose and literary events recorded in London by the Poetry Society and the British Library, beginning in the late 60s and continuing up until the early 90s. It includes an array of wonderful poets, both famous and lesser known.

I was delighted to come across Debjani Chatterjee’s poetry whilst cataloguing her reading at a Poetry Society event held at the National Poetry Centre in April 1990. The event also featured Indian poet, Eunice De Souza. The poets conjure vivid and sensory worlds, depicting Indian and British culture, religion, mythology and wildlife, whilst skillfully addressing issues relating to feminism, identity, racism and environmentalism with wit and poignancy. 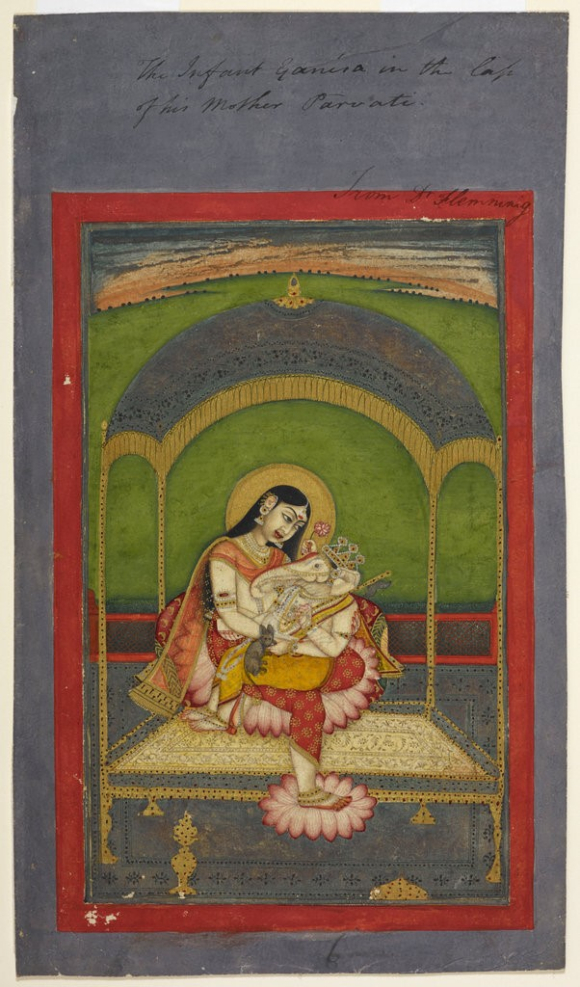 Chatterjee was born in Delhi and grew up in India, Japan, Bangladesh, Hong Kong and Egypt, then moved to England in 1972. This poem ‘To the English Language’ cleverly portrays the perspective of an Indian immigrant making the UK their home and coming to terms with the contradictory emotions faced whilst asserting the importance of her place and voice, adeptly using the infamous ‘Koh-i-noor’ diamond as a metaphor. Chatterjee introduces the poem as “a journey to a language” and “a journey to a country”.

In Hindu mythology, Ganapati is the ‘elephant-headed god of wisdom’, also known as Ganesha or Gaṇeśa, amongst other titles. He is the son of Parvati, goddess of the mountains, and Shiva, god of destruction and the destroyer of evil. This poem is directed at Ganapati’s mother, Parvati, as depicted in the image. The poem refers to a tradition from Bengal, the home of Chatterjee’s ancestors, in which Ganapati is married to the banana tree. Chatterjee reveals earlier in the reading that she is particularly interested in elephants and she has written a large amount of prose and poems inspired by them.

This influential poem takes us on a journey, exploring various women, goddesses, heroines and characters from multiple countries, religions and cultures, both mythological and real. It includes Eve in the Garden of Eden, Sita, heroine of The Ramayana, Draupadi, heroine of The Mahabharata, Medusa and the Buddha’s aunt, to name just a few. I would encourage you to delve into Debjani Chatterjee’s poetry and explore the rest of the characters further. Debjani Chatterjee's website is a good starting point for understanding some of the references in the poem above.

Thank you to Debjani Chatterjee for kindly allowing us to share her poetry readings.