On this day in 1970, as chance would have it a Saturday just like today, around one and a half thousand people assembled on the green fields at the rural Worthy Farm near the village of Pilton in South West England for what was then known as the Pilton Pop, Blues & Folk Festival. The event, organised by dairy farmer Michael Eavis, was not an instant success but laid a foundation for something that over the following decades would become the leading fixture of the British live music and festival scene.

Fifty years on, the Glastonbury Festival has evolved into arguably the world’s most popular music festival. Headlining one of the main stages has become an indicator that one has made it in the industry and getting to perform at Worthy Farm is now a dream many bands pursue.

The festival has a long history of supporting a diverse range of performing artists which is evident in its infrastructure. Along with the famous Pyramid Stage dozens of smaller stages are scattered all over the festival site which provide a platform to (relatively) unknown performers to showcase their talents to a wider audience.

In the early 2000’s Glastonbury took its support of aspiring bands and musicians to another level by calling out for unsigned acts to enter a competition which offered the chance to perform on one of the festival’s main stages. The Emerging Talent Competition, launched in 2004 as the Glastonbury Festival Unsigned Performers Competition, is still part of the annual festival today.

From 2010 onwards applications were processed online but up until 2009 emerging acts had to physically compile an application bundle consisting of an entry form, giving details about the performer and their music, a biography and a demo CD containing no less than two or three of their best songs. A selected team at Glastonbury would listen to the demos, shortlist their favourites and invite the successful candidates to perform in a final at Pilton Working Men’s Club.

Above: Demos and documents of the Glastonbury New Bands Competition collection stored at the British Library Sound Archive.

From 2004 to 2009, excluding the fallow year of 2006, thousands of applications found their way to Glastonbury. CDs, documents and additional items that were often added to the applications, such as band merch or press cuttings, started to fill a growing number of boxes stored at the festival offices. They could have stayed locked behind those office doors, never to be seen or heard again, but luckily the organisers understood the potential value of what they had in their possession. In search of a permanent home for the recordings they eventually got in touch with the Sound Archive at the British Library, whose Popular Music department was thrilled to acquire the collection.

A contemporary witness of the music created at the beginning of the 21st century by unsigned bands and musicians in Britain and beyond, the Glastonbury New Bands Competition Collection (C1238) not only offers the opportunity to reflect on the current state of various music genres, but also provides a valuable representation of youth and DIY culture at the turn of the century, captured through the demo designs and song lyrics.

In the first three years of the competition contestants were offered to choose between four stages for which they wished to compete: the Dance Tent/ Dance Village, the Acoustic Stage, the World Stage/ Jazz World Stage and the New Tent/ John Peel Stage. This approach resulted in a refreshing mix of musical genres amongst the submissions. The overall winner would appear on the Other Stage, situated right behind the Pyramid Stage, following in the footsteps of established performers such as Iggy Pop, Massive Attack or the Chemical Brothers. 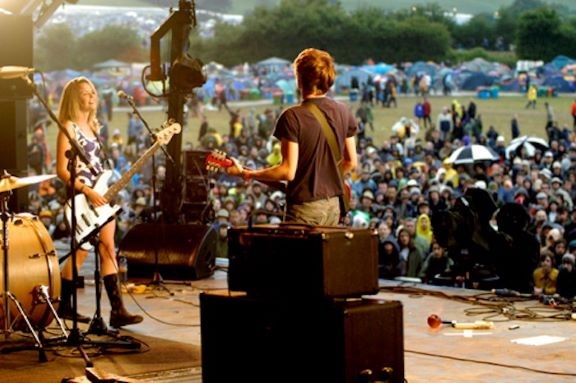 Above: The Subways performing on the Other Stage at the Glastonbury Festival 2004 following their win of the first competition. © STUNPHOTO

English rock band the Subways were the first to win the overall competition in 2004 and are only one example of an act that went on to establish themselves after entering. Amongst others, the collection includes some rare first attempts by Scouting for Girls, Liz Green, James Blunt, Smoke Fairies, Newton Faulkner, Wild Beasts and Ashok, a band featuring Florence Welch, subsequently of Florence + the Machine. Not all of these acts would emerge as winners or even get invited to the finals of the competition – which only confirms that determination and stamina go a long way. Many bands vanished after a few years, some never found fame but still enjoy performing together today. Other contestants found success pursuing other professions outside the music industry and this collection adds a piece to all of their biographies.

Consisting of more than 4600 demos, the Glastonbury New Bands Competition Collection has been selected for the ambitious Unlocking Our Sound Heritage project (UOSH), which is part of the Save Our Sounds programme led by the British Library. Involving ten further hubs across the UK, UOSH aims to preserve nearly half a million unique and at-risk recordings and to make them accessible to the public. The project solely focuses on collections that have been stored on analogue recording formats. These are prone to two possible risk factors: the sound carriers are physically vulnerable; and the means to play them back are slowly becoming extinct. 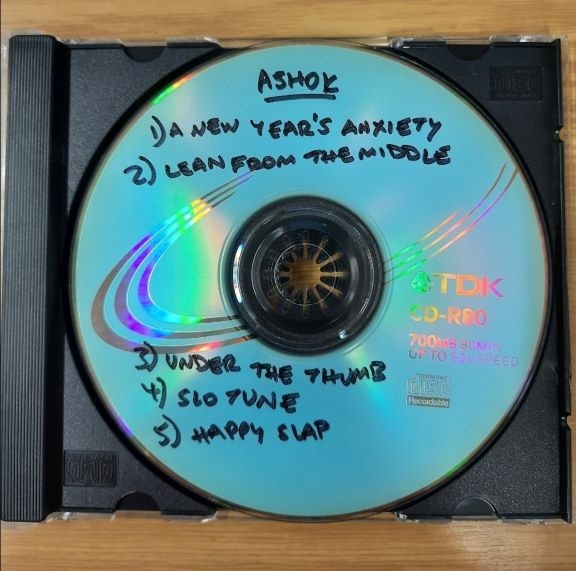 Above: Demo submitted by Ashok featuring Florence Welch who went on to form Florence + the Machine. ‘Happy Slap’ is an early version of their debut single ‘Kiss with a Fist’.

In this particular case, CD players are still widely available and most PCs even have an inbuilt CD drive. However, the vast majority of the demos submitted to the Glastonbury competition were on CD-R. Different from mass-manufactured commercial CDs, the digital information on CD-Rs is burned into a layer of dye on the bottom side of the disc. The results of this procedure are strongly dependent on the device used for the burning process, the quality of the blank disc and the speed at which the information has been written into the dye. Furthermore, the dye simply fades away over time and exposure to daylight can speed up that process.

All of these aspects make this large collection particularly vulnerable and therefore call for a pressing need to digitise these recordings in order to eliminate the risk of losing their audio content forever. At the same time the UOSH rights clearance team is in contact with individual artists to make this collection as accessible as possible.

The Glastonbury New Bands Competition Collection will be fully preserved by the end of this month. 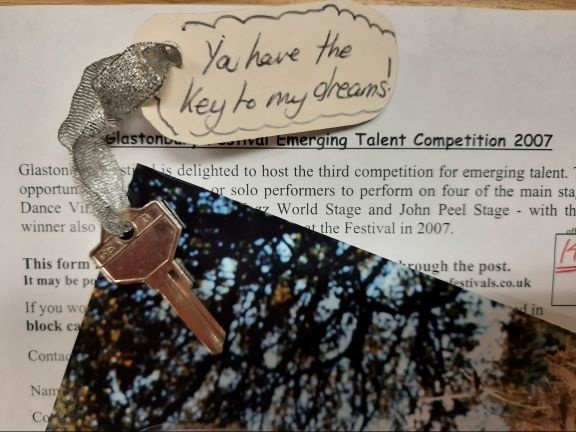 Above: Discovered amongst the collection documentation items: a contestant quite literally put the key to their dreams in the hands of the competition organisers.

Keep an eye out for Nina Webb-Bourne’s forthcoming blog, she will be sharing the story behind the winning demo submitted by the Subways to the Glastonbury Festival Unsigned Performers Competition in 2004, featuring an interview with the band’s lead singer Billy Lunn.