Joshua McMullan examines the ongoing security review of the ES and AB series at the National Archives in the context of oral history interviews recorded for 'An Oral History of the Electricity Supply Industry'. 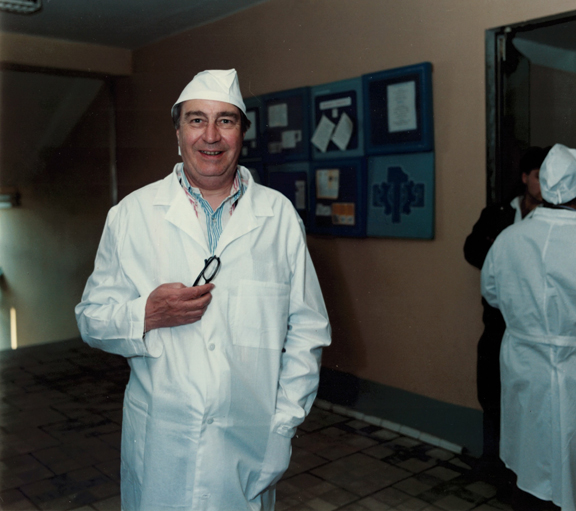 Peter Vey at the Chernobyl nuclear power station complex in 1988, as part of an international delegation led by Lord Marshall. Courtesy of Peter Vey

On the 13th July 2018, senior civil servants from the Ministry of Defence requested that files pertaining to the UK nuclear programme, located within the ES and AB series at the National Archives, be ‘temporarily withdrawn’ from public viewing. The MOD stated this was necessary in order to conduct a security review of said files and, while reviews of this nature are common, the scale is not. As someone researching the UK’s civil nuclear programme’s public relations strategy, the review put a significant hurdle in the way of my work. However, by listening to oral history interviews held at the British Library and conducted with people who worked for the nuclear industry I have been able to continue my research. I have also been able to connect these interviews to other archival sources, including files at the National Archives I was able to access before they were closed off for review. From this work I suggest the government will find it difficult to make secret aspects of nuclear history that were, and are, public.

In particular the interviews with former managing director of the Central Electricity Generating Board, Sir John Baker, and former head of public relations at the United Kingdom Atomic Energy Authority and then CEGB, Peter Vey, have added a lot to my research and my understanding of how the industry worked, both from an organisational and technical point of view. This includes John Baker’s remarks on storing nuclear waste; including the industry’s policy on storing low level nuclear waste, as well as discussions over where future waste disposal sites might be located. In Peter Vey’s interview we learn of how he arranged lunches between Chairman of the UKAEA Sir John Hill and journalists, as well as how the UKAEA believed the BBC held a bias against them. Due to his past work for the UKAEA, Vey’s insights show us what kind of information might be held within the AB files.

We can further summarise this is the kind of information held in the AB files by looking at other archival records held at the National Archives, including PREM 19/3656 that details the UK response to the Chernobyl disaster. This file includes comments from former Deputy Chairman of the UKAEA, and at the time Chairman of the CEGB, Lord Walter Marshall, who wrote to Prime Minister Margaret Thatcher advising her what to say and, crucially, what not to say regarding the design of UK nuclear plants. Lord Marshall’s advice was intended to avoid potentially awkward comparisons between the UK’s nuclear programme and that of the Soviet Union. We can also look at reviewed AB files such as AB 38/2164, which details the UKAEA’s public relations response to Chernobyl. In this file we can see the institutional mindset of the UKAEA, which had created a video claiming that an accident like Chernobyl, ‘could not happen here in the UK.’ Internal memos state that the video was not for the general public as it was ‘too technical’, and that an alternative video produced by the CEGB was more appropriate. Vey’s interview brings these documents together when he speaks of how the organisations that made up the industry collaborated to mitigate public concern over the dangers of nuclear power. We learn of how members of the industry viewed the public as well as which technical aspects of UK reactors they believed the public might be concerned with if the information became common knowledge. All of this is information I expected to find in the AB files.

By triangulating a variety of sources, including the oral histories held the British Library I have been able to continue with my research despite the ongoing security review of the AB files. However, the availability of so many other sources of evidence does raise an important conundrum for researchers and the government. Even with the MODs decision to retract what was once public information it will prove very difficult to remake the information into a secret when there are thousands of other sources available. Academics such as myself have been able to read and listen to a multitude of different people who know a multitude of different things and to distil it into our work. I am not the first to research the UK nuclear industry, and there are other researchers who are faced with this same hurdle. However, the real challenge is not for us who must navigate around this hurdle, but for the government. If they do decide to re-make swathes of information secret, they will face an impossible challenge of tracking down every source of recorded information in an attempt to close them off. This would include oral history interviews such as those with Sir John Baker and Peter Vey.

Sir John Baker and Peter Vey were interviewed for the National Life Stories project 'An Oral History of the Electricity Supply Industry'. Their interviews can be listened to at BL Sounds. For more information on the UK response to the Chernobyl disaster see the blog 'Chernobyl: Perspectives from the British Nuclear Industry'

Posted by Charlie Morgan at 4:37 PM