Recording of the week: Another side of Laurence Binyon 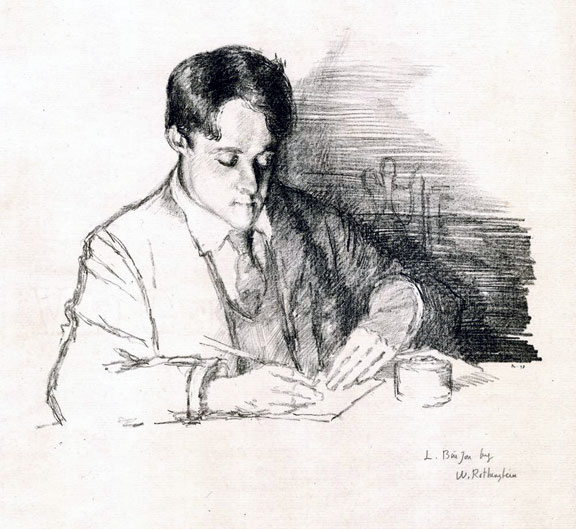 Portrait of Laurence Binyon - lithograph by Sir William Rothenstein, 1898. © The Trustees of the British Museum, released as CC BY-NC-SA 4.0.

Poet and scholar Laurence Binyon (1869-1943) spent 40 years working for the British Museum as a leading authority on Chinese and Japanese art.

As a poet, he is best remembered for these lines from his WWI poem ‘For the Fallen’, which was first published in The Times of 21 September 1914:

They shall grow not old, as we that are left grow old:
Age shall not weary them, nor the years condemn.
At the going down of the sun and in the morning
We will remember them.

In 1914, Binyon himself, though over-age for military service, volunteered for the Red Cross, and served at the front as a medical orderly.

For this ‘recording of the week’ we present the poet reading a lesser-known work, ‘Pine Trees’, one of a group of four poems recorded for the Columbia Graphophone Company of Japan.

The original 10” 78 rpm disc, from which this is dubbed, is so rare that the sound archive does not actually hold its own copy. The date of recording is unknown.

Down through the heart of the dim woods
The laden, jolting waggons come.
Tall pines, chained together,
They carry; stems straight and bare,
Now no more in their own solitudes
With proud heads to rock and hum;
Now at the will of men to fare
Away from their brethren, their forest friends
In the still woods; through wild weather
Alone to endure to the world's ends:
Soon to feel the power of the North
Careering over black waves' foam;
Soon to exchange the steady earth
For heaving decks; the scents of their home,
Honeyed wild-thyme, gorse and heather,
For the sting of the spray, the bitter air.