Recording of the week: My family and other tapes

The British violinist Derek Collier (1927-2008) enjoyed a long and successful career as an orchestral leader, soloist, broadcaster and teacher. He recorded four commercial LPs but left a much larger legacy of broadcast and private recordings, which his daughter kindly donated to the British Library in 2011 (in 2012, Sound Archive curator Jonathan Summers wrote about them in this blog). Some months ago, I was assigned the Derek Collier collection to catalogue for Unlocking Our Sound Heritage – and I felt like Gerald Durrell, magically transported back to youthful years spent with a menagerie of soon to be extinct specimens. 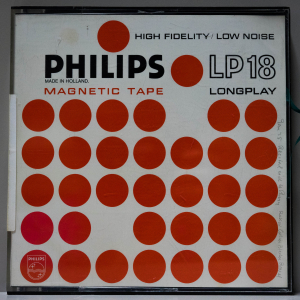 Only, this isn’t Corfu and they’re not pelicans, seagulls, scorpions or tortoises – they’re tapes. One problem with tapes is that they all look a bit the same. Some have pretty boxes and some have funky spools, yes, but most don’t tell you very much about themselves. Unless, that is, you’ve spent your formative years working with them. Starting as a radio producer more than three decades ago, I learned the Tao of tape hands-on at a Studer or a Telefunken, herding take-up spools and snipping raw takes with chinagraph pencil, razor blade and splicing sticky.

So it was a nostalgia trip to be reunited with these long-lost friends thanks to Derek Collier. Collier broadcast extensively for the BBC over nearly half a century, and his collection contains all the kinds of tapes used in radio production, and more. There are rehearsal tapes, including one with the Black American conductor Dean Dixon – very short, sadly (Jonathan Summers also wrote about Dixon in this blog). There are session tapes: a sequence of pieces recorded in the studio, with false starts, mistakes, retakes and ‘patches’, from which a ‘studio manager’ (engineer) and producer spliced together the best bits – it’s rare to be able to compare unedited recordings with edited versions, but the Derek Collier Collection makes it possible. There are ‘insert’ tapes, containing just the edited music for a broadcast, to which spoken presentation was added either in a studio or live on air – the collection even includes one insert tape for a programme which was never transmitted.

There are ‘clean-feed’ tapes: sometimes, at pre-recorded broadcast concerts, a presenter was in the hall, announcing the music as if live, but a separate tape without the presenter’s voice was also recorded. There are listening copies: tapes sent to Derek Collier as a courtesy by producers. One small spool, often used for short BBC news reports and trails, has the standard BBC label I myself stuck on countless spools, standard coloured ‘leader’ I myself spliced onto countless tapes – yellow at the start and between items, red at the end – and with it a note on BBC letterhead I sent to countless contributors, listing three items Derek Collier had recorded for Steve Race’s Invitation to Music on Radio 4 but hadn’t managed to record off air. 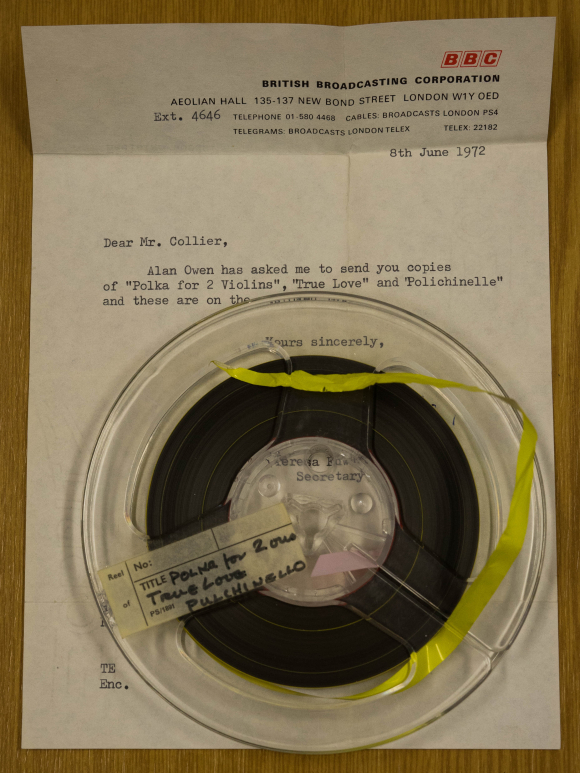 Talking of which, there are lots of off-air recordings – Derek Collier had a recorder at home and taped his broadcasts from the radio. But he also used it to record himself practising and rehearsing, bringing us closer to the starting point of his interpretations, before a piece was ready for the concert hall or the studio. And, as a bonus, there are examples of several of these types of tapes from his teacher Alfredo Campoli, complementing the collection donated in 1995 by Campoli’s widow. 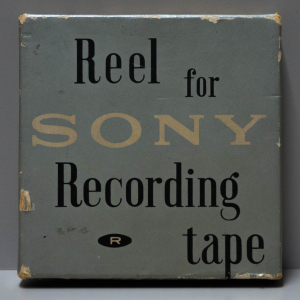 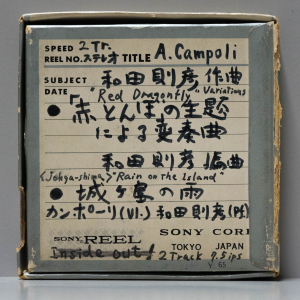 Derek Collier broadcast a lot of music by modern composers, so for copyright reasons it’s not possible to sample all the species in his tape zoo on this blog – but we can play an extract from a work which Collier premiered in the UK and which turns up several times in his collection. Boris Blacher’s Violin Concerto Op.28 was composed in 1948 and introduced to Britain by Collier in 1963. Among his tapes are an undated private practice recording of the solo part, an off-air tape of the premiere, and an unedited session recording from 1976, plus the edited broadcast recorded off air the following year. But from 1965, here’s the end of this exciting, vivacious Concerto in another broadcast performance by Derek Collier, with the BBC Symphony Orchestra and none other than Dean Dixon:

Derek Collier gave public solo recitals until shortly before his death in 2008, and he continued to record them, on cassettes, in the venues themselves, capturing the atmosphere and practices of the thriving musical life of Essex, where he’d retired. And he went on adding new types of tape, recording duplicates on different machines (for safety?), creatively copying ‘master’ cassettes to correct technical problems, recording rehearsals, and making mix-tapes of previous performances, seemingly as sample programmes for concert organizers or interpretation guides for new recital partners. 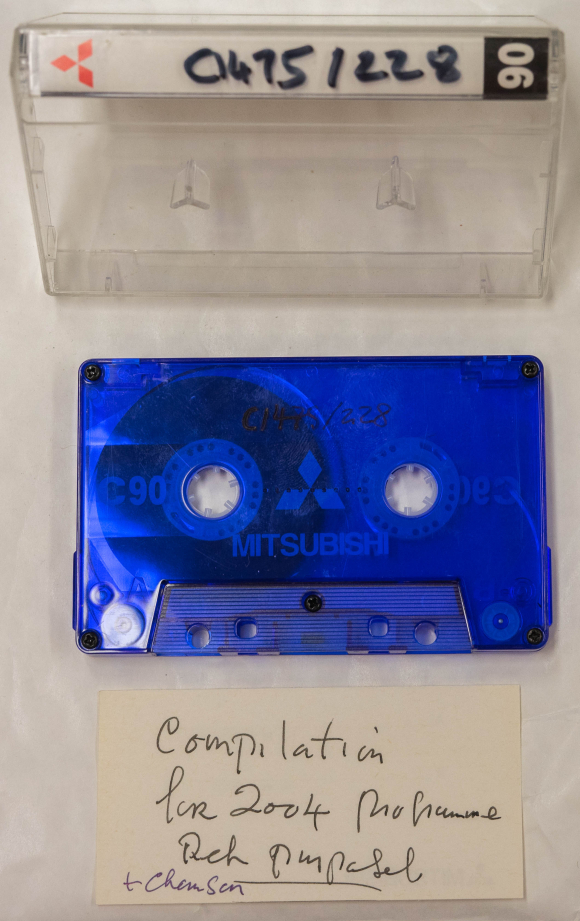 Compilation for 2004 programme rehearsal purposes, from the Derek Collier Collection

Making sense of this extended family of recordings has been an absorbing and rewarding task, and thanks to the National Lottery Heritage Fund it has been preserved for visitors to the British Library’s website and reading rooms to explore and enjoy in future.

Posted by Andrea Zarza Canova at 10:17 AM