On 28 March I was supposed to be going to the O2 Forum in Kentish Town to see the Subways, an English rock band, with my sister. However, all live music was effectively cancelled as we entered into a national lockdown five days before. The evening would have been both a celebration of seeing a favourite band live, and the recent news that I had been hired by the British Library. Little did we know, I would quietly start my position as the communications intern for the Unlocking Our Sound Heritage project still in lockdown, two months later.

In a happy coincidence I soon learned about the inclusion of a rare Subways demo in the Glastonbury New Bands Competition collection (C1238). In fact, the band was first to win a competition giving unsigned bands the chance to perform on stage at the festival. You can read more about the history of the Emerging Talent Competition in this blog by Karoline Engelhardt, which marked the 50th anniversary of ‘Pilton Pop, Blues and Folk Festival’ on 19 September. 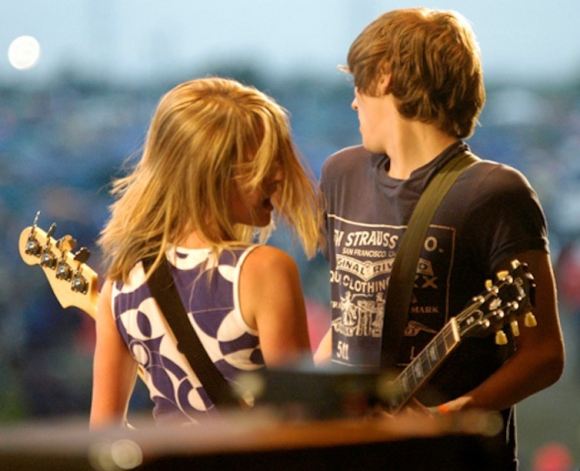 Above: A photo of the Subways’ Charlotte Cooper and Billy Lunn playing bass and guitar on the Other Stage at Glastonbury Festival in 2004. © STUNPHOTO

For five years, unsigned bands sent in physical applications with a short biography and a demo CD containing their best tracks. The competition soon moved online, but in the brief period beforehand it generated a large number of boxes of ephemeral material related to the entries, and close to 5,000 CDs. The local library in Glastonbury was a likely candidate for storing the collection but it was neither able to process the stock or house it.

However, the organisers sought a permanent home for the collection and were able to connect with the British Library’s Popular Music department for this purpose. The Glastonbury New Bands Competition collection would go on to be identified as a valuable treasure trove of youth culture, and deemed a worthy beneficiary of UOSH’s National Lottery Heritage funded effort to preserve and provide access to some of the UK’s rarest and most at-risk sound recordings.

In light of the significance of this collection and the serendipity of my working on a project involving the Subways, I was excited to be able to interview lead singer and front man Billy Lunn. Billy plays guitar for the band alongside Charlotte Cooper (co-lead, bass and backing vocals) and Josh Morgan (drums). I talked to him about the journey from being an unsigned act to traveling the world with his bandmates, and what it means to know their Glastonbury demo now resides in the UK’s national library.

In 2004, Billy Lunn was working in a hotel, collecting dirty laundry from rooms. He was also writing and recording lots of music for his band, the Subways. To pay his parents back for purchasing his 8-track mixer, he also recorded tracks for other local bands in the kitchen of his parent’s council house in Welwyn Garden City. By chance he found out about Glastonbury’s Emerging Talent Competition. Billy explains:

‘I’d mixed this other band’s tracks and handed them their finished demo. I asked where they were going to send it, offering the details of some really supportive promoters we’d come across. They said “Thanks, but we’re actually just going to send this to Michael Eavis. He’s running this unsigned bands competition, and if you win, he’ll put you on the Other Stage at Glastonbury.”

‘A month later, I received a phone call from a man called Wes White, saying he loves the songs, and that he thinks we should make our way up to Pilton to play for Michael at his working men’s club.’

White was part of the jury that helped choose the finalists for the Emerging Talent Competition from 2004-07. However, he had been involved with the festival since its earliest days. His mother, Hilary White, had worked at the Festival Office in Glastonbury town and helped to formalise the process behind the competition.

From the moment the office’s address had got out, she had fielded a barrage of speculative CDs and cassettes coming in. Initially she had listened to these demos on her own. She would pass them on to whichever stage booker she deemed appropriate, though slots were often difficult to find between the bookings for established artists. Eventually Hilary White managed to get bookers for the main stage to agree to host one unsigned band each, with the overall winner going on to play on the Other Stage. 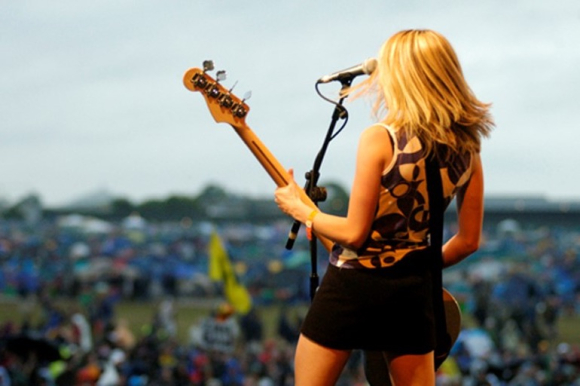 Above: A photo of Charlotte Cooper facing the crowd at Glastonbury Festival, as she plays her bass guitar. © STUNPHOTO

When the conventions of the competition were confirmed, Wes White joined a panel of judges at the live finals, including Michael and Emily Eavis, Martin Elbourne (who booked the Pyramid Stage), Malcolm Haynes (Dance Village and Jazz/World Stage), BBC Radio One presenter Huw Stephens, and producer Philippa Marshfield, among others. White speaks about his time as a judge fondly:

‘We were very proud of the number of unsigned performers we found slots for across the festival, beyond just the winning artists, and of the achievements that some of “our acts” have gone on to.’

He remembers the Subways performance in Pilton. In particular he recalls ‘their energy and straightforward, no-messing approach’ which helped them to stand out. The band managed to squeeze six songs into a tight twenty-minute set. Most importantly for White, they let the music speak for itself. Billy recollects that the band were packing their instruments away when Michael Eavis strolled straight over to them to offer them the Other Stage slot.

The prospect of playing live on the Other Sage at Glastonbury elicited the usual pre-gig nerves, but it did not daunt the band. They were 18 or 19 at the time, relishing the chance to make some noise, and still riding on a high from beating the competition in Pilton. They also knew they had nothing to lose. Surprisingly, the gig itself remains a hazy blur to Billy, Charlotte and Josh. Billy says:

‘I can vividly remember standing side-of-stage before showtime, and also walking into the arms of our manager after finishing the set. The gig itself was probably a little too much excitement for my consciousness to keep hold of. One day, maybe, hopefully, the show will come flooding back. Every electric second of it.’ 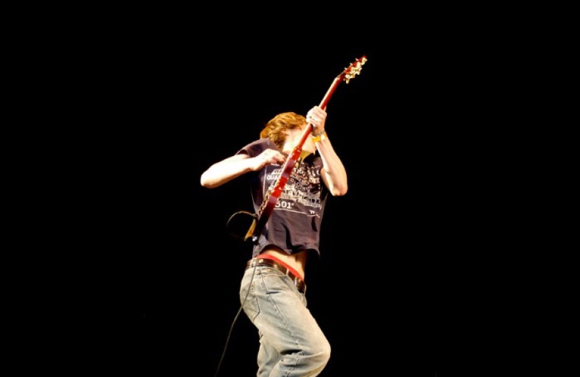 Above: A photo of Billy Lunn twisting mid-air as he plays his guitar to the crowd on the Other Stage in 2004. ©. STUNPHOTO

Playing at Glastonbury had an immediate effect on the band. They decided to quit their jobs, having determined that winning the competition proved them they should devote their lives to making music. Following their appearance on the Other Stage, they began work booking their first UK tour. At the close of the tour they were signed by Warner Records. Their debut album, Young for Eternity, was released in July 2005.

The Subways have recently marked the 15th anniversary of Young for Eternity with a special edition release of the record and a tour rescheduled for next year. They have also recorded Rock & Roll Queen in 20 different languages for fans all over the globe. Billy reflects on the journey from his parents’ kitchen to touring and performing Young for Eternity now:

‘We’ve been asked many times over the last decade whether we’re sick of playing songs from Young for Eternity - especially Rock & Roll Queen – and our answer is always the same; never! Performing on stages all over the world is absolutely the most enjoyable part of all of this. No matter how many times we play the songs from Young for Eternity, as long as they create an atmosphere of joy and togetherness, we’ll play them with the urgency and vivacity as if it’s the first time.’

A part of this journey and a unique artefact of the band’s personal history has now been preserved and digitised by UOSH for the British Library’s sound archive. There was only ever one version of the CD made which was submitted to the Glastonbury New Bands Competition collection, (C1238/2540). It was essentially a ‘best of’ compilation of all the demos that the band had recorded up to that point.

Billy feels thankful to have taken part in the competition in the first place, and to have gone on to have the chance to support their heroes on stage at such an early age. Turning his mind to the value of the UOSH project at British Library, and our safekeeping of this sole version of their demo, he says:

‘The prospect of preserving cultural artefacts is something for which I show unending support. I am passionate about the history of rock music. I always feel unworthy of any such devotion of focus to my own works or narrative, but I ultimately feel remarkably happy that some semblance of our story is being safely preserved for those who may harbour even the vaguest of interest in it.’

Listen to I'm In Love Above: A photo of Josh Morgan playing the drums at Glastonbury on The Other Stage in 2004. © STUNPHOTO

Alongside Billy Lunn, Wes White, who is a librarian himself, expresses his ‘relief, delight and pride’ that this snapshot of underground music at that time is now part of the historical record. By October the collection will be fully preserved, and will be made available to the public soon.

I am grateful to Billy and Wes for agreeing to be interviewed for this piece, and Ben Hamilton-Kirby and BMG for helping us to share these recordings. Thanks to the many members of the UOSH project who have worked on this vast and fascinating collection, including but not limited to; Karoline, Kirsten, George, Lucia, Greg, Gosha, Karl and Tom.

Posted by Nina Webb-Bourne at 4:39 PM