It is hard to imagine a set of circumstances in which the possession of a vinyl record of a Christian minister would be illegal.

But this did happen, and not so long ago. The year was 1966; the country was South Africa; and the speaker was Dr Martin Luther King Jr. 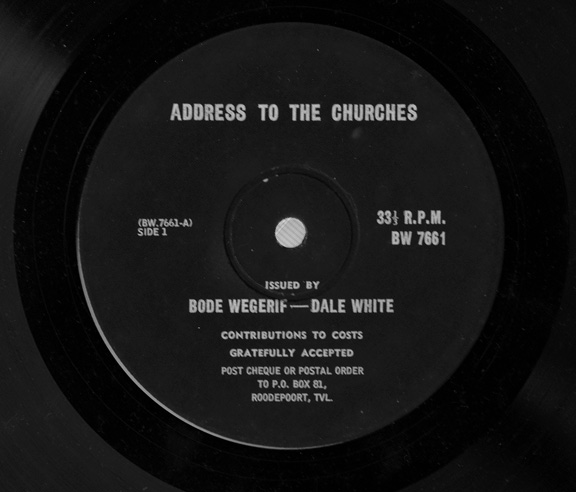 In July 1966, the disc pictured above was distributed to 1200 church and community leaders throughout South Africa. The South African Publications Control Board banned the record on 19 August that same year, with no reason given. A police spokesperson reportedly said that mere possession of the disc would be grounds for prosecution.

This was at a time when the minority white population dominated the majority black population through the system of ‘apartheid’. Apartheid was a policy of legalized racial segregation and discrimination that existed in South Africa for most of the second half of the twentieth century.

Two years before this incident, future president Nelson Mandela had been imprisoned: a 'life sentence' that was to last 27 years.

The disc features a speech by Dr King given in St. Louis, Missouri, USA, in October, 1964, at a meeting of the Episcopal Society for Cultural and Racial Unity. It included a call for US society and its churches to cleanse themselves of racism. It seems this was not a message the South African authorities wanted people to hear.

The records were pressed and distributed by the Rev. Dale White (an Anglican priest, and director of the Wilgespruit Christian Fellowship Center near Johannesburg) and Bode Wegerif (an executive in a Johannesburg publishing company).

The British Library only acquired a copy of this rare record in 2019, when it was kindly donated to the collection by Jannie Oosthuizen.

Jannie wrote at the time:

The LP record was in the record collection of my father, D.C.S. Oosthuizen. He died in 1969, but we remember the record as children, and played it from time to time.

We never noticed that it didn’t have Martin Luther King’s name on the label, and I had assumed incorrectly that it had been bought on sabbatical in the states in 1968.

But in finding it again recently and looking up the history, I realise that it must have been sent to him (as a South African church leader) when the record was first distributed in 1966.

A contemporary press release about the banning, with quotes from Dr King, is available to view on the web site of the African Activist Archive.