Recording of the week: Electricity in the kitchen

Almost every time someone enters a new room in the UK, there’ll be a flick of a switch. To turn on a light, a plug or household appliance. From cups of tea to loads of washing, many of us rely on electricity to make our home lives comfortable.

However, the immediate nature of electricity was not always the norm in our homes. Until the mid-20th century, many homes – especially in rural areas – remained ‘off the grid’. Coal was the main source of fuel, with the coals needing to be lit in stove before any food could be cooked or water heated.

From the late 1940s a programme of rural electrification took place. This was a result of a series of acts that bought together, or nationalised the electrical supply industry in Britain.

Alan Plumpton, a commercial engineer, was employed in the 1950s to advocate for people to use electricity in their homes. In this clip he relays how he would often attend community groups in the evening to give lectures on what electricity meant, and how much it would cost homeowners.

This activity was often geared towards a certain audience: women. More specifically, housewives. A huge amount of work was taken to persuade them that electricity was the future. Plumpton continues to say that after he spoke about the practicalities of electricity, ‘housecraft advisors’ would then demonstrate how to bake cakes using electrical ovens, or use washing-machines.

The Electrical Association for Women (EAW) was established in 1924 who, over the following 60 years, promoted the benefits of electricity in the home. As well as publishing educational material on using certain appliances including cookers and washing machines, the EAW established a school to run courses on electrical housecraft. 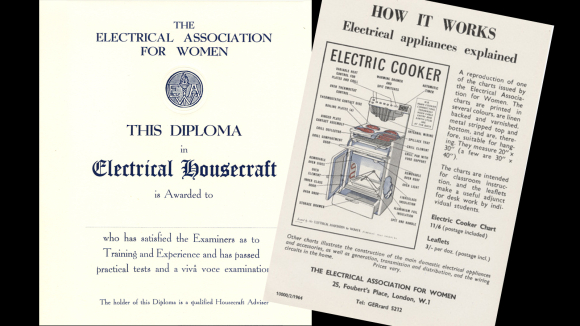 ‘How it works’ leaflet for an electric cooker, and a diploma in Electrical Housecraft. © Institution of Engineering and Technology Archives

Yet this expanse of activity promoting the benefits of electricity in the home sometimes does not outweigh its cost. Fuel prices, household incomes and energy efficiency are all factors that cause households to not afford enough energy to power their homes; and according to the most recent government survey in 2017, there are 2.53 million fuel-poor households in England.

To discover more about how our homes have changed over the past 100 years, draw back the curtains and go to If Homes Had Ears.