Given that the surviving recordings from British radio’s first decade, the 1920s, can be counted on the fingers of one hand, and that most of those are unintelligible, it was astonishing when proof finally emerged of something long rumoured – that professional sound recordings had been made of Marconi’s legendary experimental broadcast of 15th June 1920.

Featuring the Australian operatic soprano Dame Nellie Melba, the event, two and a half years before the launch of the BBC, is chiefly remembered as the moment when the full potential of radio as a medium of mass popular entertainment was established beyond all doubt. 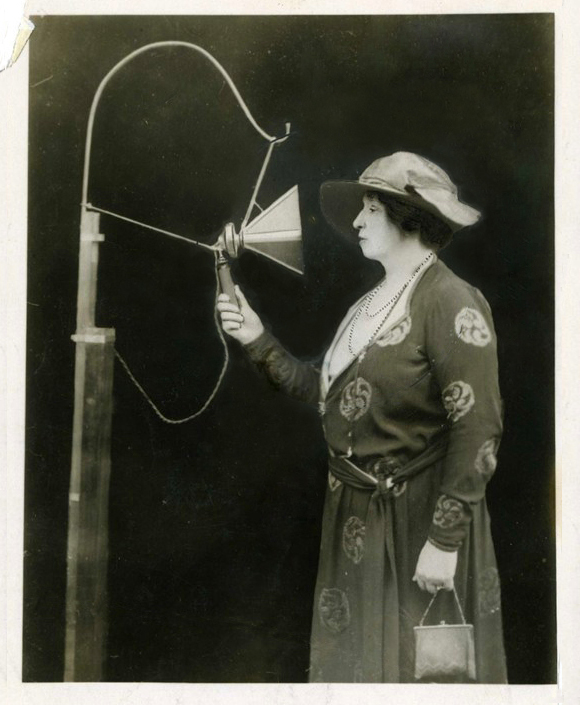 Britain’s first scheduled radio programmes, combining newspaper readings with performances by local amateur musicians, had been transmitted three months earlier and generated considerable press interest. So it was no surprise when, soon after, newspaper magnate Lord Northcliffe offered to finance a programme designed to grab headlines around the world. The idea was simple – offer £1,000 to one of the world’s most famous singers to perform live in a broadcast of sufficient power to reach every home in Europe.

Fascinating stories are told of the prima donna’s arrival at the Marconi Company’s Chelmsford works and her oft-quoted comment to the Chief Engineer on being shown the 450 foot transmitter mast from which her voice would be radiated across Europe – “Young man, if you think I’m going to climb up there you are sadly mistaken!”

Yet one of the most remarkable innovations of the event – a set of wax disc recordings made in a Paris laboratory – was largely forgotten for the next eighty years. Historian Tim Wander eventually followed a trail which uncovered an article in a 1920 edition of the journal of the Société française radio-électrique (SFR) and, back in London, this archival photograph of the recordings being made at the SFR’s factory in Levallois-Perret, a suburb of Paris: It shows the SFR engineers operating wax disc cutting lathes linked to one of three receivers set up to capture the event. Since each disc could capture just a few minutes of sound at least two lathes were needed to ensure that recording would continue on the second while the disc was being changed on the first. We can also see the heavy brass canisters used to protect the discs after recording. So fragile were the wax discs, which degraded on every pass of a playback stylus, that in reality they were only likely to survive if they were subsequently electro-plated, then re-pressed to a more durable medium such as shellac. This was an expensive business and might explain why, as far as we know, the recordings do not survive.

Or do they? And what might we hear in those long lost recordings, the ‘Holy Grail’ of British radio historians, should they ever turn up?

Most likely the hiss of the ‘ether’ was firstly interrupted at 7.10 pm by Marconi engineer W.T. Ditcham in his usual fashion:

MZX Calling! MZX Calling! This is the Marconi valve transmitter in Chelmsford, England, broadcasting on a wavelength of two thousand, seven hundred and fifty metres... Stand by for Dame Nellie Melba...

Then, perhaps, a pause as Marconi staff rushed to pull aside the specially laid carpet which the ‘Australian Nightingale’ kicked at disapprovingly for reasons unknown. Ditcham again returned:

Hallo, Hallo, Hallo! Dame Nellie Melba, the Prima Donna, is going to sing for you, first in English, then Italian, then in French.

Melba then announced her presence with a vocal ‘trill’ which also served to prime her vocal cords. Meanwhile, her accompanist Frank St Leger no doubt readied himself at the piano and the babble from the assembled throng crammed into the New Street Factory’s makeshift studio was hushed to silence.

Finally, as the Mail reported, “Punctually at a quarter-past 7 the words of ‘Home, Sweet Home,’ fitted to the familiar melody, swam into the receivers” – and into the homes of astounded listeners all over Europe and the Middle East.

This studio recording of the song which Melba recorded in London eleven months later, is today the closest we can get to experiencing the sound of that first ever British radio performance by a professional musician.

But this story also reinforces an important point – that sound recording alone is no guarantee that the sounds of today, or of a century ago, will be preserved for future generations. And of course that is the whole point of the Library’s Save Our Sounds initiatives.

Tuning in on the first days of broadcasting (British Library blog, 15 Nov 2012)