An interview with Major James Howe

In 1996, Les Back (Professor of Sociology at Goldsmiths, University of London), interviewed Major James Howe, MBE (1917- 2005), a musician and bandleader who led a dance band in a German POW (prisoner of war) camp during the Second World War. 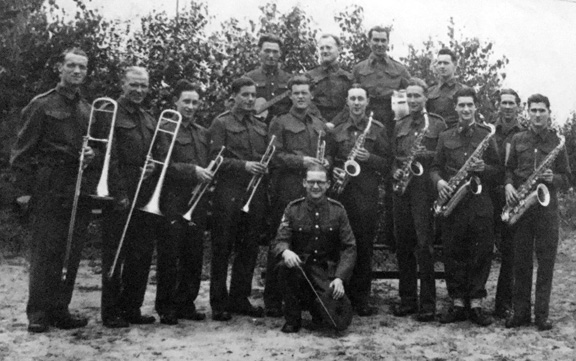 Above: Major Howe (centre, kneeling) with his band in Berlin, 1943. Used with permission from Alan Howe (photographer unknown).

The audio recording of this interview is  now part of the British Library collection, Oral history of Jazz in Britain. It has recently been cleared for online release as part of the Unlocking Our Sound Heritage project.

The interview brings to life a fascinating tale of creativity and survival against the odds. This blog post features selected excerpts. 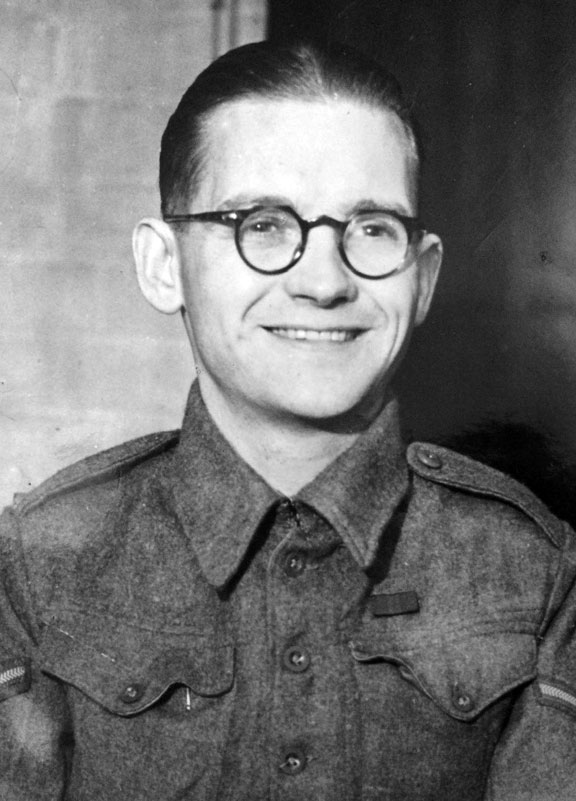 James Howe was born in County Durham, UK on November 11, 1917 - exactly one year before Armistice Day. The son of a brass band conductor and miner, Howe grew up in a musical family. He and his brothers played in his father’s band, and his mother taught him the piano at the age of nine.

He left school at fifteen to become band boy in the Royal Scots Regiment. He was among the first UK soldiers to be sent abroad in 1939 when the Second World War broke out, and he served as a stretcher bearer in Belgium and then France. His duties were cut short in Le Paradis, Northern France when his regiment came under fire from German soldiers in May 1940. He was lucky to escape alive – many soldiers were killed or wounded here during the Battle of Le Paradis and the subsequent massacre.

Howe and his fellow captives were marched through France, Belgium and Holland to reach a prison camp in Lamsdorf (then in Germany but now in Poland), which is now known as Łambinowice. In the following excerpt from the interview he describes this harrowing journey.

Camp life in Lamsdorf was initially very difficult for Howe and his fellow POWs. In the interview he talks about sleeping on straw, problems with lice and an insubstantial diet (a bowl of soup and five black potatoes per day). Salvation eventually came when the Red Cross started sending parcels to the camp. First food, and then materials for recreation, including books, sports equipment, and, miraculously, instruments. In this next interview excerpt Howe describes what a difference these deliveries made to camp life.

Thanks to the arrival of instruments, and records to transcribe music from, Howe ended up conducting his very own dance band in the camp. This, and the evolution of camp entertainment, was a testament to the ingenuity of all concerned. In the camp were individuals with backgrounds in stage work, carpentry and music. They built their own camp theatre, created a ticketing system and had concert parties. Prisoners danced foxtrots and waltzes with one another, and found solace in music that reminded them of home.

In the next excerpt from the interview, Howe provides some insights into the mechanics of the camp entertainment system.

He also describes some touching moments of shared interests with the German guards at the camp, including one who invited him to his hut to listen to records. Another guard heard Howe playing the accordion, so brought his own violin so that the two could play together in his hut. According to Howe, the guard said:
'If Churchill and Hitler could see you and I now, there wouldn’t be any wars'.

Unusually, Howe’s POW band were even escorted to Berlin, Germany to play for fellow POWs at another camp, and in 1943, Howe, as a stretcher bearer and early arrival at the camp, was fortunate enough to be included in a repatriation agreement, which took him home to the UK via Sweden, with other similarly fortunate POWs. News of the POW band had travelled, and well-known UK band leader Billy Cotton helped to get them featured on BBC Radio.

In his interview, Howe remembers frantically telegraphing all his POW bandmates to reunite them in London for the performance. In 1944 he was sent back to France with his regiment, before finishing the war in Hamburg, Germany in 1945.

After returning home, Howe studied at the Royal Military School of Music in Twickenham, UK, and was appointed Bandmaster of the Argyll and Sutherland Highlanders in 1949. His military band career took him all over the world, and as a band leader (later Director of Music of the Scots Guards) he travelled as far afield as the US, New Zealand, Australia and Hong Kong.

After his military career, Howe conducted the BBC Concert Orchestra, featuring on radio programmes such as Friday Night Is Music Night and Melodies For You. 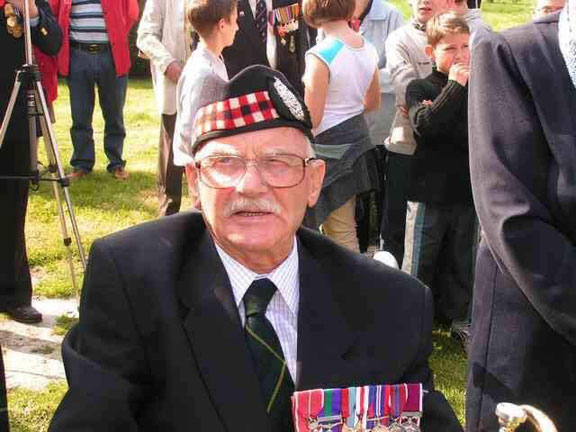 Above: James Howe, pictured towards the end of his life. Used with permission from Alan Howe.

Howe retired to Eastbourne, UK and channelled his musical talents into organ and conducting duties, as well as starting the massed band concerts at Croydon, UK in 1974, and organising POW reunion concerts. He continued to be actively involved with music until very late in his life (in the interview he demonstrates his skills on the cornet) and a plaque dedicated to his memory is installed at Eastbourne bandstand. After Howe passed away in 2005, his ashes were buried in the cemetery in Le Paradis, in accordance with his wishes.