Nazis on trial: Nuremberg 75 years ago

Seventy-five years ago today, on 20 November 1945, the first of the Nuremberg trials began in the German city that had been the setting for the huge Nazi rallies addressed by Adolf Hitler in the 1930s. The military tribunals, presided over by judges from Britain, the US, France and the Soviet Union, aimed to prosecute prominent members of the political, military, judicial, and economic leadership of Nazi Germany who had carried out the Holocaust and other war crimes during the Second World War.

Amongst the twenty-four defendants were Hermann Goering, Hitler’s chosen successor, Rudolf Hess, Joachim von Ribbentrop and Albert Speer. Twelve were eventually sentenced to death, seven received prison sentences, three were acquitted, and in two cases there was no decision.

Hartley Shawcross (1902-2003) was the lead British prosecutor at Nuremberg and was interviewed by Kathy Burk for National Life Stories in 1991. His opening speech in July 1946 lasted two days and in this clip he particularly remembers Hermann Goering, and offers some tips on the art of effective courtroom cross-examination.

Goering was found guilty but committed suicide the night before his scheduled execution, begging the question whether he had escaped justice. 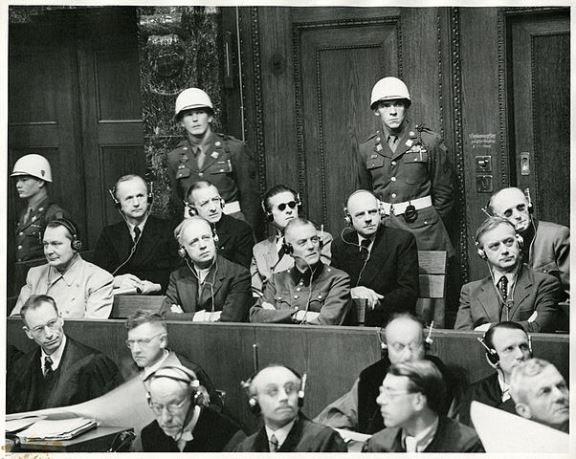 The Nuremberg trials were a milestone in international criminal law, whereby individuals and organisations were held accountable for terrible crimes against humanity. They paved the way to the establishment of a permanent international court, which has dealt with later instances of genocide and war crimes.

Shawcross was later Attorney General in the 1945 Attlee's Labour government and successfully prosecuted British fascist and Nazi propagandist William Joyce ('Lord Haw-Haw'), the last person to be hanged for treason in the UK.

Hartley Shawcross's oral history recording was digitised from cassette as part of the Unlocking Our Sound Heritage project.

Posted by Camille Johnston at 8:52 AM