Caulking the ethnographic gap – A Trobriander perspective on the songs, dances, stories and performers of the Malinowski Cylinder Collection (C46)

linus digim’Rina is a Trobriand Islander and an anthropologist. He is currently Head of Anthropology at the University of Papua New Guinea. He provides a Trobriander perspective on the Malinowski Cylinder Collection (C46), which has also been described on the Sound and Vision blog today. 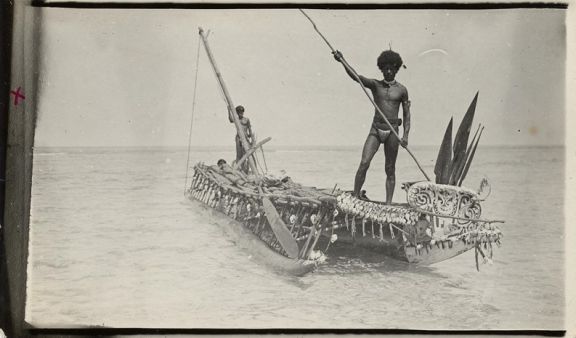 Above: Nigadabuwa canoe with Namwanaguyau doing a slow punt along the shores of Khaulukuba beach. Image courtesy of LSE Library: MALINOWSKI/3/4/8

All these items originated from the Bweyowa cultural heritage of the Trobriand Islands, part of its gulagula. With a slight exception on the Gumagabu song dance, the images and recordings have over time been removed from the cultural ambience of the place, Bweyowa, Kilivila, Kiriwina or the Trobriands. As with Rogaewa from the Iwa people, it will probably struggle to find a comfortable niche back at its original home. Yet it is not completely isolated and could potentially and mutually be invited back ‘home’ like the proverbial prodigal son in the Christian bible.

Gumagabu, according to Malinowski, was in 1918 owned by To’uluwa, chief of Omarakhana, and whose ancestors acquired it from the descendants of Tomakam through laga payment. If this claim by To’uluwa was true then laga payments by Bweyowa custom is outright alienation whereby holdership of previous tenant is completely terminated. I have since then not heard of any other group or village that contested this claim by To’uluwa. 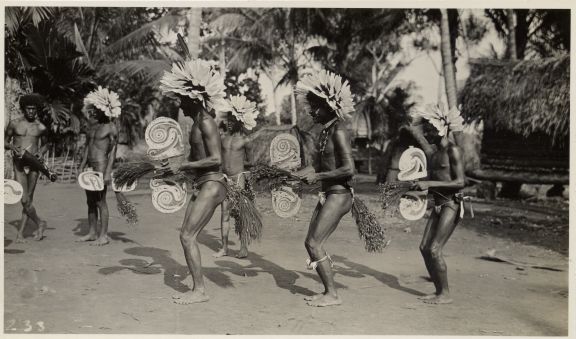 Other than this there are no plausible other claims of ownership for Rogaewa, which the Okheboma people occasionally and sentimentally lay claims to, nor is it possible for Ilakhavetega and WosiTuma for that matter. The images too are neither offensive nor emotionally heart-rending. In fact, both the sound recordings, despite the poor quality perhaps, and dance images would generate a mild reminder of perhaps a slipping-by Bweyowa cultural heritage – a certain phase of cultural paradigm that is worth reflecting upon for the future. In this view, I would suggest seeking the endorsement of the incumbent of the Bweyowa/Trobriand office of the paramount chief – GuyolaKilivila. He is the sanctioned overall custodian of Bweyowa/Kilivila gulagula. This immediately disqualifies all Church leaders, politicians of various levels and modern day professionals.

Personally, and after listening to many of the tunes, not to mention themes, of these so called archaic sounds, and generally from South East Asia through to the Pacific region, I recognise a fundamentally common similarity in the tunes, flows, humming and repetitiveness of the songs. (I wish I was a musician to explain this a bit more clearly.) This is found in poems, magical chants, mourning dirges, laments, heralds and songs. For the time being and in the absence of a better label I suspect this alluring similarity to be fundamentally Austronesian!

As with Malinowski and those immediately before him, the chosen field approach together with its fine field documentation methods generated its own values, and indeed part of which we are appreciating. Over time we have all become part of the journey of documentation hence, ‘caulking ethnographic gaps’ has become our immediate task that has probably opened up more possibilities. These songs, dances and stories are alive, have been enacted, details adjusted and adopted – and continue to live on. This is a result of often mutually combined efforts between the chronicler and the informants and/or collaborators. Insofar as one can see for the Trobriand Islands at least, the anthropologist-informant relationship is by and large ephemeral suggesting unsustainability by average standards. I wonder if this is an unanticipated end result of objective-imbued field observation and documentation approaches. For, and on the other hand, the Christian churches approach do not necessarily document like the anthropologist and yet leave behind apparently a more lasting active legacy with the people – often derided as been subjective. Christian missionaries tend to impose, observe and adjust methods of cultural integration including appropriating cultural spaces such as renaming places and persons – to which the anthropologists do not. Through the institution of baptism for instance, church legacies have lived on as part of the local people’s annual cultural celebrations and personal names like Peter, Jacob, Benjamin, Esther, being proudly carried on and shielded by its received forms of morality. By contrast therefore, the world famous name of Malinowski is faintly recalled, and I know of no Trobriand child named after him. A few of the elders use his books mainly for the images and tales rather than the ideas expounded. Malinowski is not alone and indeed this includes all the other anthropologists that came after him, as well as myself at Basima, on nearby Fergusson Island. Of course, immediate family members playing hosts do rename one or two of their off springs after the anthropologist but this is where it ends, generally. This is perhaps why the world famous Malinowski shall remain obscure and often on the recesses of living Trobriand Islanders’ lives unless one is a travel writer or becomes a student of anthropology, as I have been.

Returning to the songs and dances for the last word, modern day performances lacks systematic documentation except for a few parents and school teachers insisting upon children to learn, display and be involved in cultural performances. The language is spoken everyday but not so much of the singing and dancing of those traditional themes and tunes. The introduced ideas and beliefs together with more dynamic technology have evidently taken over much of the cultural spaces. In fact only the occasional travel writers, tourists, journalists, office of tourism agents, social media enthusiasts and urban based relatives that pick up performance images for various purposes. This casual form of documentation characteristically lacks the vital cultural context. There still remains hope however for the present generation to embrace the potential of today’s technology towards the fosterage of that ‘slipping by’ Bweyowa culture. 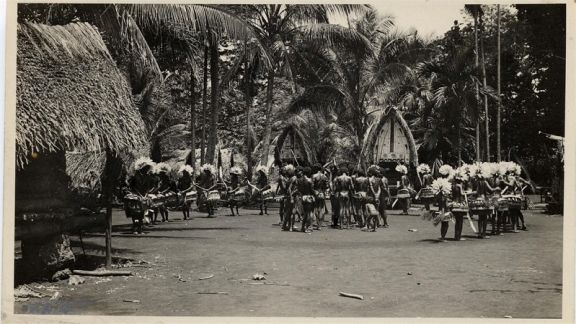 Above: The Rogayewo, a slow dance performed by men wearing fibre skirts, and holding pandanus streamers in their hands. Image courtesy of LSE Library: MALINOWSKI/3/SOS/58

For further information and commentary from linus on the Malinowski Cylinder Collection, please visit the True Echoes website.

Posted by Rebekah Hayes at 7:10 AM