Recording of the week: Gut feelings in weather forecasting 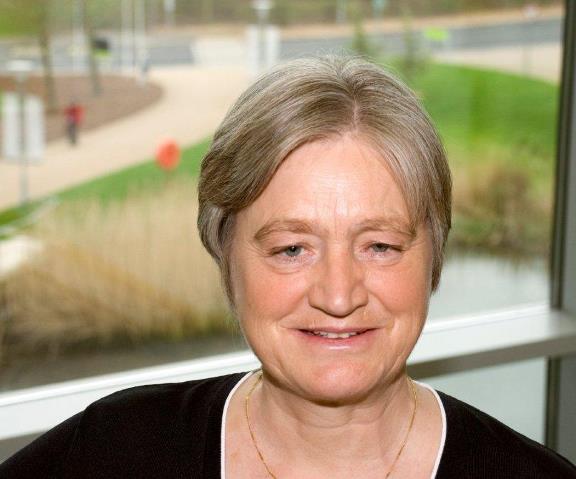 Julia Slingo at the Meteorological Office in Exeter as its Chief Scientist, 2013

In her oral history interview Professor Dame Julia Slingo describes many aspects of her life and work as a climate modeller. Her research has focused on tropical climate variability and its impact on the global climate. She started her career at the Meteorological Office, where she received training in weather forecasting – developing a ‘gut feeling’ for the weather:

Could you now then describe the practical training on this Met Office course at Shinfield Park?

Yes, so every afternoon we would take the current weather patterns and what we’d learn to do was to actually plot the charts, so in those days you learnt how to plot all the symbols that describe the weather at a particular location and then you’d draw up the chart with the pressure pat – the isobars and you’d use the observations to decide where the weather fronts must be from things about what the observations were telling you. And we learnt to work out things like … the difference between what the weather’s doing at the surface and what the weather’s doing in the middle of the troposphere, it would also tell you about how weather patterns would change with time. But we – it was all very practical because at that stage none of this was computerised; there was a lot of hand drawing and – and plotting observations and thinking about – and interpreting what they mean and so we would – that was – that was what we spent the afternoons doing and then we would make our own forecasts: what we thought was going to happen to the weather patterns over the UK the following day. And it was fascinating, because what you also learn is that – is that expert judgement comes into this as well, that it’s not just purely theory, there’s actually all sorts of local knowledge comes in. And I can still remember having drawn up this beautiful chart and put a cold front in where I thought it ought to be ‘cause of what the winds were doing and all of that and I remember the tutor, the guy who was taking the class coming round and he’d say – he’d say, ‘Well Julia, why do you think the cold front’s there?’ and I’d say, ‘Oh well that’s because, you know, the winds are doing this and the pressure’s doing that,’ and blah-de-blah-de-blah. And he’d say, ‘Well I think it’s probably going to be more over here,’ and I’d say, ‘But why?’ he said, ‘Well just because I just know.’ And there was all that – there was also that – all that element of experience that comes in so this idea that, you know, when you watch the weather day after day after day you learn about … you get a gut feeling for it, which has never left me actually. So it’s – it’s not only having the theoretical base but it’s also that sort of experience and the fact that we do experience the weather from day to day which so much of physics you can’t get that sort of feeling. And, you know, now I can sort of look at a weather map or I can look at a satellite picture and I just say, I've got that feeling that it’s going to do this.

Julia Slingo was recorded by interviewer Paul Merchant in 2011 for the National Life Stories project An Oral History of British Science. Listen to the recording in full on BL Sounds.