Recording of the week: Sheffield’s pub carols, a secular tradition

Recorded by Ian Russell on Christmas Day 1974, in The Black Bull public house, Ecclesfield, Sheffield, this rousing rendition of ‘Six jolly miners’, followed by ‘Hark! Hark! What news’, captures the democratic and exuberant nature of the local ‘pub sing’, a tradition which goes back to the 19th century, and still thrives in certain pubs in South Yorkshire and Derbyshire. 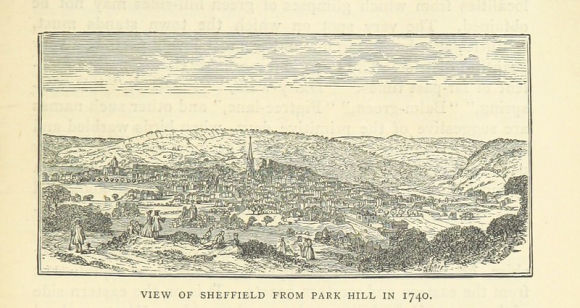 View of Sheffield from Park Hill in 1740, taken from ‘The illustrated guide to Sheffield and the surrounding district etc.’, published Sheffield, 1879

The Sheffield carol tradition has its roots in reforms carried out by the Oxford Movement, an influential group of Victorian clergymen, whose attempts to make worship more serious resulted in a purge of certain carols, which were thought of as not really suitable for singing at Christmas. The village musicians, whose presence was no longer required in the west galleries of their parish churches, took the rejected carols to their local pubs, where they have remained ever since. The pub carols often feature different words and tunes to the more familiar Christmas repertoire, and there are variations from pub to pub and village to village. Each area is proud of its own tradition, and some have their own carols, often named after the location itself, such as ‘Stannington’, written in 1950 by Mina Dyson, who was the organist at the local church in that part of Sheffield.

Despite the subject matter, the fervour you can hear in these songs is really an expression of community spirit and uninhibited enjoyment, rather than an outpouring of religious feeling. In many of the recordings you can hear the clinking of glasses, the exchange of Christmas greetings, general pub chatter (including the odd swear word) and an atmosphere of communal enjoyment that rings out in every line. ‘Awake to joy and hail the morn’, sing the locals in the Black Bull, sounding like they’re about to raise the roof. It’s hard to listen without wanting to join in.

Made by Ian Russell in 1974, as part of his research towards his Ph.D. thesis 'Traditional Singing in West Sheffield, 1970-1972', this recording is part of the Leeds Archive of Vernacular Culture, which consists of sound recordings of the former Institute of Dialect and Folk Life Studies (IDFLS), part of the University of Leeds from October 1964 to September 1983, and dialect-related sound recordings made prior to the establishment of the Institute.

The sound recordings were donated to the British Library in 2019 for digitisation as part of the Unlocking our Sound Heritage project, funded by the National Lottery Heritage Fund. The Ian Russell Collection (C331), documenting traditional English carol singing in the north of England from 1984, will also be digitised and readily available as part of this project.