Robert Cox and The Golden Fleece 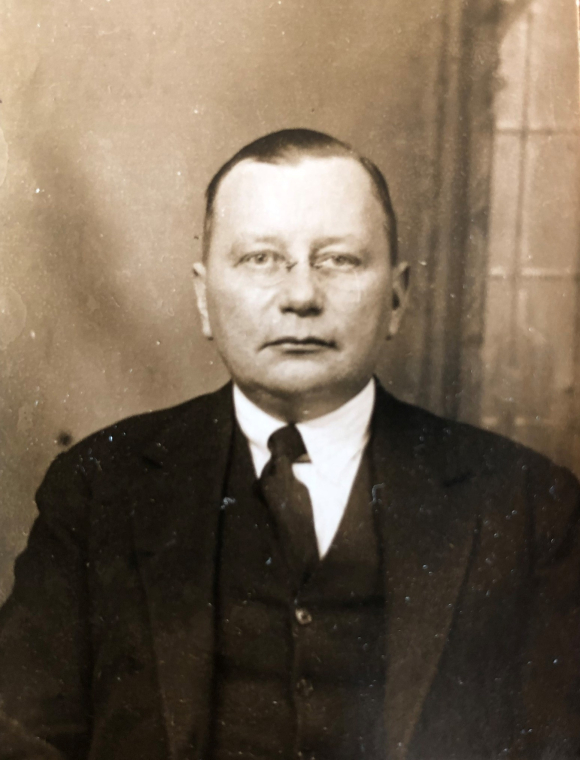 Robert Ferdinand de Lesseps Cox was born into a family of gelatine and glue manufacturers based at Gorgie Mills in Edinburgh where they established their company in 1725.  Robert was born in Edinburgh on 12th June 1884. 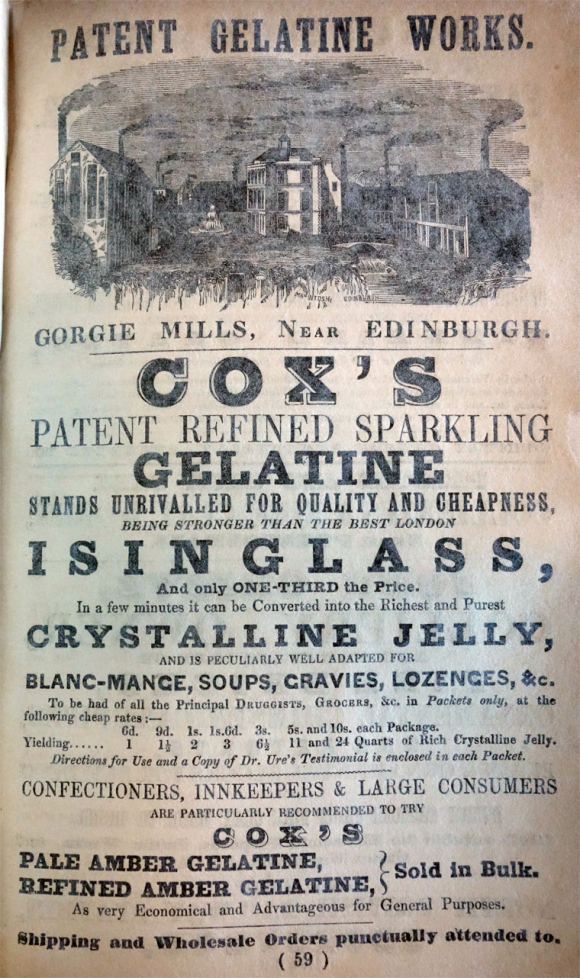 He was named after his godfather Ferdinand de Lesseps (1805-1894) a friend of his father.  Lesseps was a French diplomat and developer of the Suez Canal and, as head of the Franco-American Union, presented the Statue of Liberty to the United States and attended the dedication ceremony in October 1886. 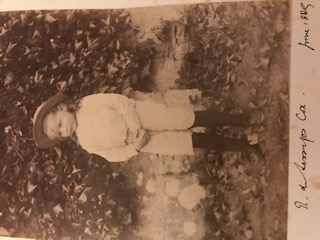 Robert Cox as a boy at Rossdhu House, Scotland

Robert’s father, Robert J. Cox (1845-1899) was Liberal Unionist MP for South Edinburgh from 1895 to 1899.  However, his son Robert did not enter the family business or politics but spent time as a musician, primarily a conductor and composer for the musical stage.  He made his London debut at the Prince of Wales Theatre in Emmerich Kallman’s hugely successful operetta The Gypsy Princess (Die Csárdásfürstin) in May 1921.  It had premiered in Vienna in 1915 and on Broadway in 1917.  Cox’s wife was a niece of the great singer Dame Nellie Melba who wanted to attend Robert’s debut, but she was performing in Paris at the time. 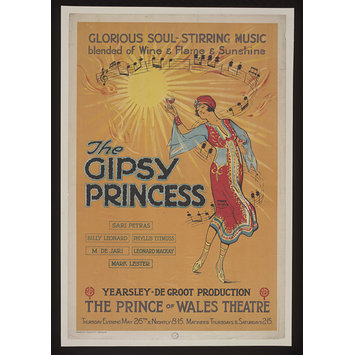 Cox began to compose at the age of fifteen when he was at Winchester College and whilst at St John’s College, Oxford, he wrote the music for a student dramatic society’s production of Measure for Measure.  Further musical studies took him to Dresden, Rome and the Royal College of Music in London.

Cox composed a Quartet in E flat, and between 1907 and 1919 wrote a handful of light piano pieces and a few songs.  Most of his output was for the musical theatre including The Love Girl, The Purple Lady, which toured the provinces for thirteen weeks, and The Magic Sword.  In 1923 Cox published a musical play in two acts, The Rose and the Ring, based on the book by William Makepeace Thackeray.  It is rather confusing as two previous works with the same title based on the same Thackeray work exist – by Walter Slaughter from 1891 (‘founded on Thackeray’s fireside pantomime’), and by American Caryl B. Rich in 1914.  There was also a light opera by Christabel Marrillier from 1928. 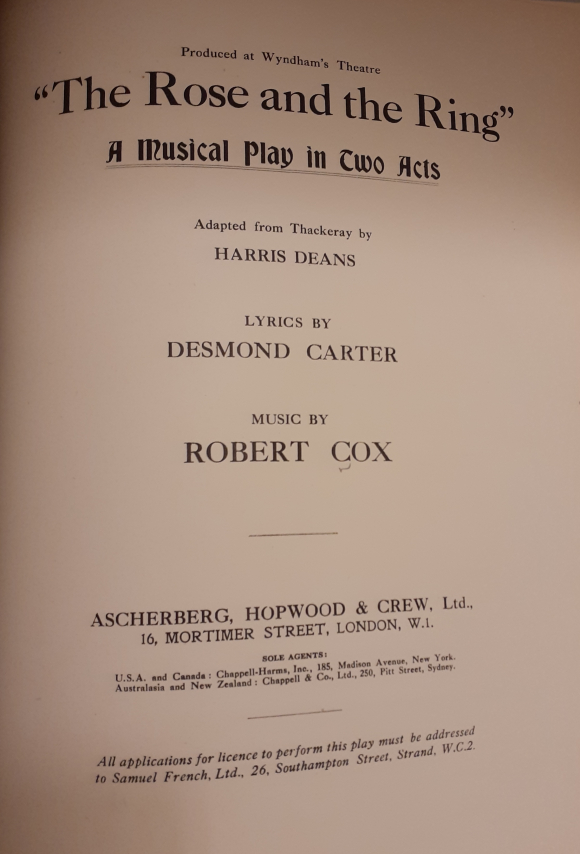 Title page of The Rose and the Ring (BL Collections)

Cox spoke many languages including Swedish and German and spent time in Sweden during the Second World War.  He was a member of the Bath Club during the 1930s, but it was bombed by the Germans in 1941.

From his first marriage Cox had three children - Robert Charles an aeronautical engineer, Susanna Winifred, a dancer, and Elizabeth Nicholas, a reporter and travel writer whose most well-known book is Death be not Proud about seven young women who served with the French Section of the Special Operations Executive who were betrayed to the Germans and eventually captured and murdered. 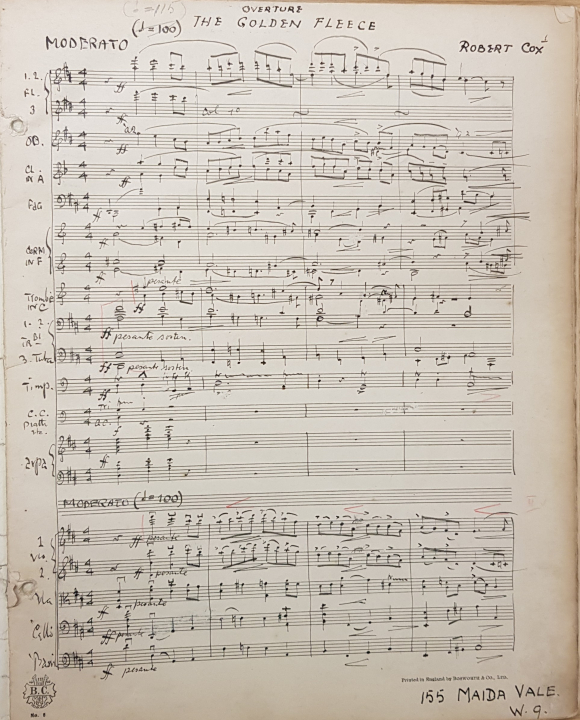 Score of the Overture to The Golden Fleece (BL Collections)

I received a donation last year from Susannah Baker, a relative of Robert Cox’s second wife, the artist, Ethelwyn Baker, via Cox’s granddaughter Jacqueline Shaun Cox Nervegna.  A hand written score of his composition Overture and Suite to The Golden Fleece was accompanied by an off-air recording of the only broadcast of the Overture given on 28th November 1937 by the BBC Orchestra under Joseph Lewis (1878-1954).  The Suite of four movements was broadcast on 23rd September 1938 by the same forces.  The Overture is a fine, well-crafted work, reminiscent of Elgar and Vaughan Williams.

Listing in the Radio Times for 28th November 1937

Here is the off-air recording made more than eighty years ago.

Overture to The Golden Fleece

Thanks to Jacqueline Shaun Cox Nervegna for information and the use of family photographs.

Posted by Jonathan Summers at 1:56 PM