The untold story of the birth of World Wide Web: putting the record straight 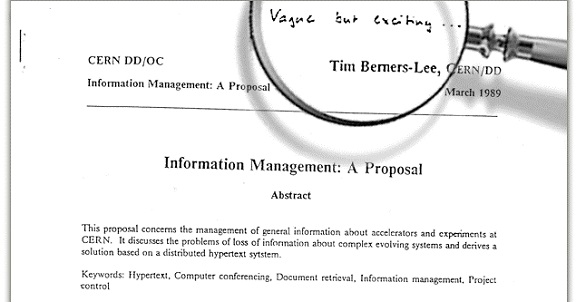 In 1984 the CERN scientist Dr Elsie ‛Peggie’ Rimmer made a staff appointment that would change history. She helped recruit a young British computer scientist named Tim Berners-Lee to join her group. A rare woman physicist in a male dominated field, Peggie was an expert in computer standards and became Berners-Lee’s supervisor during the years when he was developing his concept of a World Wide Web. In 2019 Peggie recorded her life story for An Oral History of British Science, covering her memories of the birth of the web, and a short interview for the latest National Life Stories Annual Review.

There are lots of good ideas that never get the time, resources or chance to change the world. But over the 1980s Peggie and group leader Mike Sendall, later her husband, created an environment that nurtured Berners-Lee’s early work on the Web and gave him the opportunity to get his idea off the ground. As Peggie recalled:

“CERN was a physics lab, not a computing lab. But the ground there was fertile because of the need for global interworking and I was a champion of computing standardisation, perhaps the strongest one at CERN, so it was a good place for Tim to be. That’s what the Web is, a standard way of sharing information all around the world. Mike and I together somehow made it possible for Tim to do his work. Not technically, but actually. We kept it quiet and got him what he needed. Mike, in charge of the purse strings, got Tim the NeXT computer that he used for the Web stuff, encouraged him, and I gave Tim suitable jobs, sent him off to relevant meetings and so on. Somebody had to do that.” 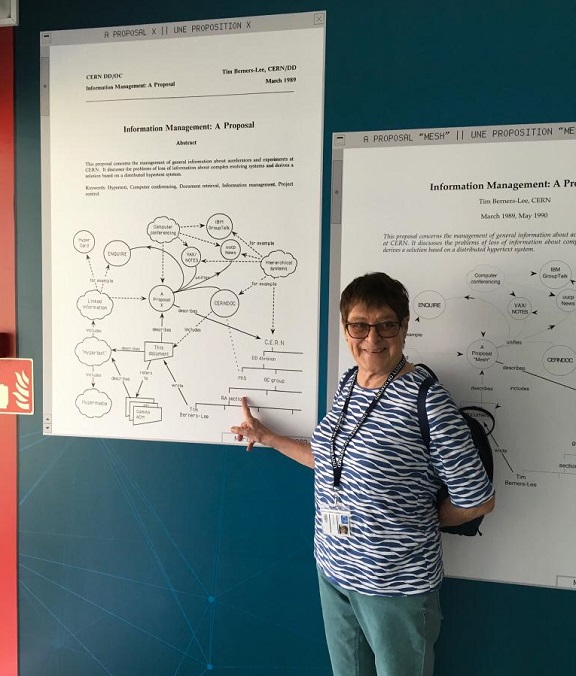 Peggie Rimmer in 2019, indicating her Read-Out Architecture RA section on the first of the three proposals for what became the World Wide Web. Source: Peggie Rimmer

In March 1989 Berners-Lee’s first draft proposal for what would eventually become the World Wide Web landed Sendall’s desk. In the corner Sendall jotted a phrase that has entered the history books as the understatement of the century: “vague but exciting…” But as Peggie now reveals, it was never a comment that was meant to be seen, and in the crucial months that followed personal revelations and tragedy would see Peggie and Sendall unexpectedly step back from an idea that was about to change the world. It is a story that has remained untold until now:

“In April 1989 Mike told me that he thought he was gay – though we didn’t use that word then – homosexual…. in the ‘80s it was not the sort of thing that you easily discussed or admitted, not in Europe. It was tough. We considered what Mike should do… After a week or two had passed in turmoil, I said to Mike, ‘Would you please go through Tim’s proposal [the first draft of his proposal for the Web, though it wasn’t called that yet] because he’s waiting for your answer’. Mike did that and on the cover page he wrote what has become a worldwide slogan ‘Vague but exciting...’ We looked at it together and I said, ‘Right now, how am I going to put a phrase like that to some guy? I cannot discuss it with Tim’. So Mike agreed to change it… But a short while later he was diagnosed with a form of bone cancer and given 18 months to two years to live. So that rather changed things. And once again – [you] don’t tell anybody because when you’re dying your career is finished.”

“The reason that Tim’s first proposal was not shown to him - Mike’s troubles - was immensely important to me. And also it left me looking rather peculiar as I walked away from everything. Almost no one, and most people still, have no idea why that happened, and I don’t wish to go down in history as someone who chickened out because she wasn’t up to it!.. The fact that the document was later published, after Mike was dead and without my knowledge, including ‘Vague but exciting …’ now printed on T-shirts, distressed me no end because Mike had promised me he wouldn’t show that to Tim, and he didn’t. And because it’s history, it’s important. If there is someone still alive who can tell it like it really was and there is no other witness to what happened, then they should tell it. Even Tim didn’t know.”

To find out more, read Peggie’s article in the latest NLS Annual Review (pp.28-29). Her full life story interview can be found by searching C1379/135 at the Sound and Moving Image catalogue and can be listened to onsite at the British Library at St Pancras and at Boston Spa by contacting the Listening and Viewing Service.