The Bronislaw Malinowski 1915-1918 Trobriand Islands, Territory of Papua Cylinder Collection (C46) is a collection of five black wax cylinders (British Library shelfmarks C46/1397–C46/1401) recorded by anthropologist Bronislaw Malinowski between 1915 and 1918 during fieldwork in what is today Papua New Guinea. The collection came from the Museum of Mankind to the British Library’s National Sound Archive in 1985. 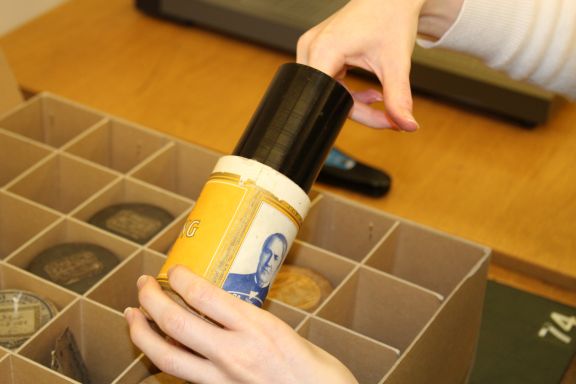 Above: An example of one of the Malinowski cylinders

This collection is part of the True Echoes project, funded by the Leverhulme Trust and the Department for Business, Energy and Industrial Strategy (BEIS). Learn more about True Echoes in a previous post. This is the smallest, and most recent, of the eight collections within the project, and one of three from Papua New Guinea.

Malinowski (1884–1942) was born in Poland, and moved to London in 1910 to study at the London School of Economics under Charles Seligman and Edvard Westermarck. He also corresponded with Alfred Cort Haddon and W. H. R. Rivers at Cambridge. These were amongst the leading anthropologists and sociologists of the time.

From September 1914 to March 1915, he conducted anthropological fieldwork in Territory of Papua, the southern half of what is now Papua New Guinea, including three months on the island of Mailu. He made two further trips to Papua from July 1915 to March 1916, and from November 1917 to October 1918. For much of these second two trips, he based himself in the village of Omarakana on Kiriwina in the Trobriand Islands.

In his most famous work, Argonauts of the Western Pacific (1922), Malinowski described the kula, a ceremonial exchange system involving shell valuables that operates across the Trobriand Islands and throughout much of maritime Milne Bay Province. Many regard Malinowski as one of the founding fathers of British social anthropology, and Argonauts as a seminal work. He is often seen as the originator of the ‘participant observation’ method of ethnographic fieldwork, first described in Argonauts, which became a hallmark feature of the discipline. You can read more about this method on the Cambridge Encylopaedia of Anthropology website. He went on to teach anthropology in the UK, most famously at the London School of Economics, and subsequently at Yale in the USA. 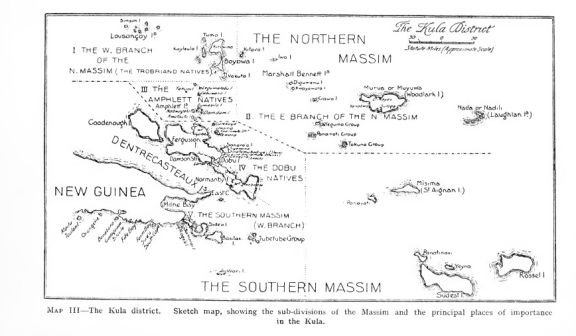 Above: Malinowski’s map of the “Kula District”. The Trobriand Islands are just to the left of the text reading “The Northern Massim” (Malinowski 1922:30).

For his fieldwork, Malinowski borrowed a phonograph from Charles Seligman, as noted in Argonauts (Malinowski 1922: xix), and purchased 72 cylinders in London. We do not know of any recordings made during his first trip to Papua. At least four of the five cylinders in the British Library appear to have been recorded in the Trobriand Islands; one is dated to 17 July 1918.

In partnership with Prof Don Niles at the Institute of Papua New Guinea studies, we have been able to correct the metadata in our records and find out much more about both the songs and the performers through archival and historical research. This research is highlighted on the True Echoes website. We have been assisted in this research by Michael Young, Gunter Senft and linus digim’Rina. As both a Trobriand Islander and current Head of Anthropology at the University of Papua New Guinea, linus has given us his own perspective on these recordings in a document on the True Echoes website and accompanying blog post ‘Caulking the ethnographic gap – A Trobriander perspective on the songs, dances, stories and performers of the Malinowski Cylinder Collection (C46)’.

The recordings feature songs sung by men with no accompanying instruments. The cylinder boxes have some information written on them in blue crayon. Michael Young, Malinowski’s official biographer, has confirmed that this is Malinowski’s handwriting. For four of the cylinders, the song or genre title and performer’s name is written.

For example, C46/1399 has the words 'Usi Tuma by Monakeu' and 'Ragayewo by Tokulubakiki' written on the side of the cylinder box. 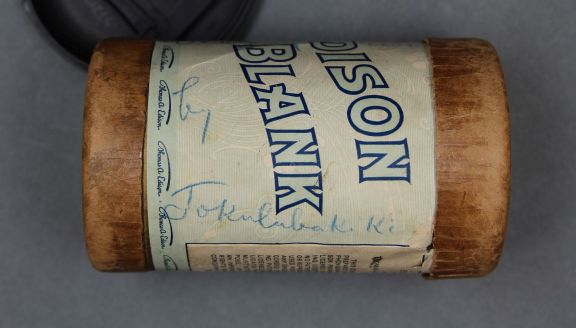 Above: The cylinder box for Usi Tuma (C46/1399) showing part of the notation in blue crayon

Malinowski wrote about both Monakeu - also spelt Monakewo - and Tokulubakiki in his diary and in letters home. Tokulubakiki was from the chiefly clan of the village of Omarakana; Malinowski described him as his “best friend” and his “favourite informant in Omarakana,” (Malinowski 1929:148. 161). In a letter to his wife, Malinowski noted that Tokulubakiki was “a decent, honest, straightforward man” (Wayne 1995:151). Tokulubakiki features in a number of Malinowski’s photographs. 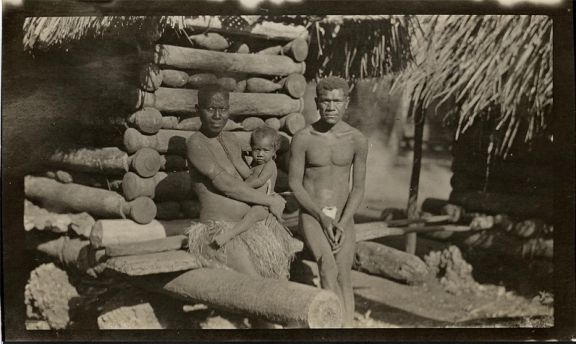 Above: Tokulubakiki and his wife Kuwo’igu in front of their yam house. Image courtesy of LSE Library: MALINOWSKI_3_SOS_26

There is no information about the contents of the song or story of Ragayewo. The only time that Malinowski mentioned it is in his diary: in Kiriwina, on the evening of 30 June 1918, he “sat and wrote down and translated Ragayewo” (Malinowski 1967:295). We do not know what has happened to this transcription and translation.

In 1985, a television documentary series on early anthropologists, Strangers Abroad (Central Independent Television) featured an episode on Malinowski’s work, Off the Verandah. The production team took at least one recording back to Kiriwina, probably 'Gumagabu by Paluwa' (C46/1398). An older man, Bwabwa’u, remembered Malinowski and translated this recording. Translation was difficult as the song was several generations old and used an archaic dialect. . In a letter to the British Library’s Sound Archive in 1985, producer Steven Seidenberg noted that the song was “about a man from Kiriwina who has been ship-wrecked … on Dobu [Island] and who has been eaten by cannibals (possibly for ritual sacrifice?). Gumagabu is the name of the man who has been cooked.”

“In working with these early collections from Melanesia, we will gather as much information as possible about the recordings, from the cylinders themselves, the collector’s diaries, photographs, collected artefacts, and published accounts. We aim to contextualise the collections with information about the collector(s), their fieldwork, and their academic involvements. With this most basic information, we will attempt to reconnect the recordings with the people for whom they have the greatest significance: the descendants of those recorded and others whose traditions are represented. We very much hope that they will be able to tell us more about the music and the performers, their intertwined histories, as well as the recordings’ significance today.”

Posted by Rebekah Hayes at 7:00 AM