Albert Roux was interviewed in 2007-08 for 'Food: From Source to Salespoint', a National Life Stories oral history project. The full interview with Albert Roux can be listened to online at the British Library Sounds website. 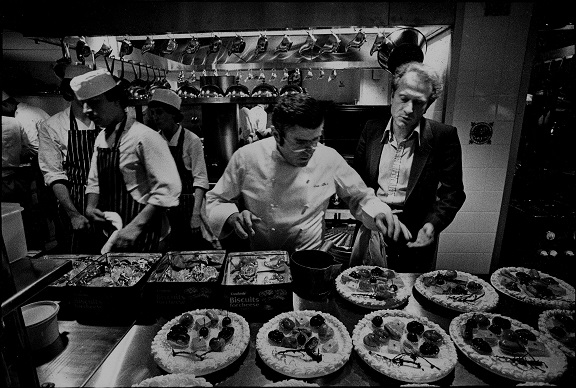 Albert and Michel Roux in the kitchen

Albert Roux, born in 1935, has died today. As a young man, his classmates dismissed his desire to become a chef as ‘woman’s work’. Now eating out is a regular social activity for many people and chefs and cooking programmes feature frequently on primetime television. When he arrived in the 1950s, most food eaten in Britain was locally produced. Now we have embraced dishes from across the globe. Albert was not just a witness but also a protagonist in these changes.

His knowledge of food began early, as both his father and grandfather were charcutiers in rural France. After training as a chef, Albert arrived in Britain in 1953. This was before the European Union and the Eurotunnel linked us with Europe so emphatically. Albert had to apply for a travel permit and have a medical before being allowed entry. Imported goods such as oranges and bananas were the exception. A greater proportion of the weekly budget was spent on food and shopping was done several times a week as domestic refrigeration was limited. Albert worked for the wealthy Astor family at their estate in Cliveden. He noted how class played into diet:

“On the day off, I would go into town … it didn’t take me too long to realise… there was a very strong division; there was the super rich, who I was working for, who lived like kings. Then you had the middle class, who lived nicely but the food was not an important subject for them. And then you had the majority who were not rich, making ends meet.”

He was also struck by the limited availability of items he assumed were kitchen essentials.

“There were commodities that we could not get in this country. If you wanted olive oil there was one or two places that sold it, otherwise you went to the chemist and bought a little bottle to put in your ears. I remember going in to a chemist shop and asking for all that they had, twelve bottles. He looked at me as though I was an elephant!”

However, tastes were changing. As more people were able to enjoy foreign travel, they were exposed to a variety of new tastes and textures, and were becoming increasingly adventurous in what they ate. In the same period, increased migration, particularly from the Commonwealth, meant wider availability of food from across the globe. When Albert and his brother Michel (1941-2020) established Le Gavroche restaurant in central London in 1967 they were aware of changing attitudes both inside and outside the kitchen.

“Nobody knew the name of the chef. They stayed at the stove and they cooked. The maitre d’s were luminaries. They were well known, you went to see John of The Connaught, or Paul of the ... the idea of the chef plating the food was unknown. That would have been scandalous to get food plated from the kitchen, cheap! There was a ceremony when the food came out, presented; put on the gueridon (trolley) there was a lot of flambé, of carving…”

The Roux brothers were at the forefront of turning chefs into national figures through their cookbooks and particularly their television series, which received several million views in the 1980s. They also influenced a generation of young chefs who passed through the kitchens of Le Gavroche: Marcus Wareing, Marco Pierre White, Pierre Koffmann, Gordon Ramsay and others. Training was hard, Albert commented, “the kitchen is the SAS of catering. It is painful. It is hard, precision work.” Despite this comment – or perhaps because of it - during Albert’s lifetime, Britain transformed itself from a ‘culinary desert’ and can now boast of some of the most diverse and adventurous cuisine in the world.

'Food: From Source to Salespoint' documented the changes at every level of the UK food sector through interviews with some 300 people involved in the production, distribution and retailing of food, including ready meals, poultry, sugar, meat and fish, the UK wine trade, cookery writers, restaurateurs and chefs, and employees of Tesco, Sainsbury, Safeway, Northern Foods and Nestlé. Interviews from the collection can be listened to online at the British Library Sounds Website.

Posted by Charlie Morgan at 5:02 PM