The British Library's National Radio Archive pilot is collaborative venture, involving curators, technologists and three software and data partners. The day-to-day work of managing the capture of programmes, however, is mostly done by one person, our Broadcast Recordings Curator Neil McCowlen. Here he describes what it has been like keeping a pilot radio archive going, under lockdown, in Hastings. 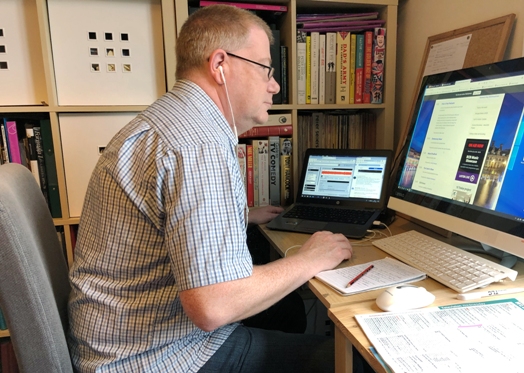 On Monday 21 March 2020 a new way of working began for most areas of the British Library, as well as many other workplaces in the UK as work shifted from office to home. This threw up many challenges. This was certainly so for the newly formed National Radio Archive at the British Library. It had started in September 2019, and in those first six months a new system had been adopted to record and archive radio programmes across 50 UK radio stations. As with all new procedures and set-ups, there had been challenges and teething difficulties as all parties began to co-operate together and a good working pattern became established. However, that all changed with Coronavirus lockdown. Now, the Library’s resources became one laptop in Hastings and remote working had to be established.

The radio stations themselves had to adapt to new working practices. The national stations continued their coverage of the main news and talking points of the day, but more importantly, the general interest programming became an important way for people to find entertainment and solace during days of isolation. For many people, being confined to their homes meant a dependence on radio for a voice to listen to as they faced a long period of isolation from friends and relatives. Keeping up with national news was important, but being aware of the local situation in their areas and nearby support and guidance became a necessity.

This is where local stations, and in particular, community stations, came to the fore. At first, many struggled with their studios having to close and volunteer presenters being confined to their homes along with the rest of the population. This proved a huge problem for the National Radio Archive too, as great community programmes were suddenly disappearing from the airwaves. The published schedules of many stations still listed shows that were now no longer being broadcast and automated playlist music now took their place. Trying to discover what was actually being broadcast became a headache, especially as only one person was now monitoring all 50 stations squashed in a corner of one room in a flat nearly a hundred miles from the St Pancras office. Social media provided a way of finding out about some of the new programmes being broadcast, but often blocks of time were recorded to see what programmes might be found in those slots, as many shows were replaced by chart music.

As things settled down, a lot of programmes were being produced at home where presenters set up equipment that allowed them to broadcast from a room at home. This led to some very interesting broadcasts. Suddenly street sounds outside windows and noises around the house were heard rather than the noise free recordings made from a studio. Some stations were able to provide equipment for some presenters, others made do with programs on their personal PCs or phones. This led to a large variety in sound quality. Many such programmes were archived by the NRA to show the range of quality across all stations.

However, the most important thing was that local information and help for the community was being broadcast. Some regular programmes returned, serving branches of the community generally not covered by national and local commercial stations. Programmes devoted to mental health, carers, those living with HIV or other specific heath matters, race, age and gender specific programming and hobbies and interests were being broadcast, giving people a chance to find ways to get them through the isolation of lockdown and discover new ideas to do in the home to boost their morale. Many of these programmes were initially discovered on social media as the schedules were still incorrect in the early months of lockdown, so it was a challenge to archive these shows, but over time patterns emerged and series became easier to follow and record.

One of the most important additions to the schedules were specific community programmes linked to COVID-19 itself and the help and advice that the health authorities within the community could provide the listeners. They also gave out helplines and gave ideas for leisure and fitness activities to help during lockdown. Stations such as Future Radio (Norwich), Resonance FM (South London), Academy FM (Folkestone), All FM (Manchester), Cornwall Hospital Broadcasting Network, Calon FM (Wrexham), Manx Radio (Isle of Man) and Radio Reverb (Brighton) broadcast such programmes, and Manx Radio also had their own government daily updates, along the same lines as Downing Street were giving out. BCB in Bradford adapted their local information show and added a further show in the afternoon to give out even more local information and stories. Siren Radio, based in the University of Lincoln, even broadcast virtual lectures for the students as term time neared its end.

These were all archived, and as the lockdown continued, stations were swapped within the NRA, so that other stations responses to the pandemic could be recorded, whilst still maintaining the maximum of 50 stations that can be recorded from at any one time on the system. Some local festivals and outdoor events had to be cancelled, but they then became virtual events and were covered by the community stations, often broadcasting parts or all of the events. 24-hour marathon broadcasts were set up to raise money, and broadcasts in different languages found within the local area became available again on several stations.

As schedules had not been updated since March on many station websites, the programme information still had to be obtained from social media, causing problems with keeping on top of the broadcasts being taken. Some replaced scheduled programmes at the last minute, due to technical problems at presenters’ homes, or they were unable to record their show due to family issues. So, even the more reliable of station schedules could not guarantee to be 100% accurate. A lot of metadata became generic and detailed programme information was no longer available on shows that were previously rich in available details. Therefore, the research to find that data became more labour-intensive.

Then there were technical issues with our equipment to contend with. There would be some days when the remote access would drop out and the laptop would need to be restarted. There could be quite a gap before a connection could be re-established. Most of the time the connection was stable, but new working practices had to be adopted. Internet speeds could become an issue, with some tasks taking longer to perform than on previous days. Meetings with colleagues were held via Zoom; technical problems were handled remotely (the NRA’s main software provider, SCISYS, is based in Germany).

The main thing is that even with a new way of working, the National Radio Archive continues to grow and has an invaluable range of broadcasts across this strange period in our lives. It mirrors the nation’s reaction to events in phone-ins, interviews and the programmes produced to help during lockdown. Radio has risen to the challenge of being a valuable friend in a trying period for many and has shown ingenuity and dedication in producing helpful and entertaining material. We are proud to say that those programmes and the story of this time in Britain’s history has been captured fully by the Radio Archive and will provide researchers with a rich vein of information in the future. As it now passes 140,000 recordings, the National Radio Archive continues to gather the nation’s words and give a fully rounded picture of not just Coronavirus, but all world and national events as they happen.

Posted by Luke McKernan at 9:12 AM