By Katerina Webb-Bourne, Communications Intern for Unlocking Our Sound Heritage.

Time is running out to preserve some of our most endangered sound recordings. The Unlocking Our Sound Heritage (UOSH) project is now four years into an ambitious, National Lottery Heritage Funded five-year project to safeguard at-risk recordings.

Despite the challenges of another lockdown, the resilience and perseverance of the UOSH team has paid off. While navigating national restrictions we have reached a key milestone to save our sounds. 250,000 recordings from across the UK are now safely preserved in our sound archive.

You will soon be able to dip into our collections on our new Sounds website and enjoy sound heritage as diverse as folklore from the Isle of Man to Uyghur music with the electric guitar. The sound items we have preserved also come from ten partner hubs located around the UK, who have contributed over 35,000 recordings of their own and are helping to manage collections from 59 organisations spread throughout Great Britain and Northern Ireland.

The UOSH team has adapted to current conditions to continue to provide access to sounds that inspire us and audio we can all enjoy in difficult times. Our Learning and Engagement teams and ten hub partners have launched sound websites, workshops, and a number of creative listening sessions for everyone.

To celebrate all these impressive achievements we want to share the 250,000th sound to be preserved by the UOSH project with you. In this recording you can hear Maeve and Dick discussing how one goes about making ‘Pig Lug’, a Yorkshire dish from the coastal town of Filey similar to a pie or pastry containing currants.

Grab a pen and some paper, and listen closely for the recipe:

Listen to Maeve and Dick

Maeve: aye but now then what about pig lug [= ‘type of pie with currants’] have I tae [= ‘to’] tell thee how tae mack [= ‘to make’] it and then if thou ever gets a wife thou knowest thou can tell her how tae mack it
Dick: aye why
Maeve: have I tae tell thee why dost thou think thou could tell me better Dick
Dick: I daen’t [= daePRESNEG (dae = ‘to do’)] know I daen’t know how tae mack it
Maeve: I know you you mack you mack pastry fost [= ‘first’] though knowest how tae mack pastry Dick
Dick: yes mm
Maeve: you get a bit o’ saim [= ‘lard’] and a bit o’ flour and a bit o’ salt put in and then you mix it in thou knowest and then you get a drop o’ watter [= ‘water’] and mix it tiv [= ‘to’ + vowel] a nice you know a nice movable consistency they call it these days
Dick: aye
Maeve: anyway you get that in
Dick: paste [= ‘dough, esp. pie crust’] aye
Maeve: paste aye and then you roll it out Dick then you put a bit of old blather [= ‘batter/pancake mixture’] on it butter margarine … (aside) go on tae them buns lass … (continues) and then you put some sugar on and then you put it wiv [= ‘with’ + vowel] a few currants your Joan daesn’t [= daePRESNEG (dae = ‘to do’)] like a lot o’ currants course she hae [= ‘to have’] tae she has tae heve [= ‘to have’] her own way like sae [= ‘so’] we put ’em we put ’em as though they were birds flying i’ t’ air thou knowest now and again
Dick: aye
Maeve: but thou likest uh raisins best daesn’t thou
Dick: I dae [= ‘to do’] I like raisins
Maeve: aye well next time we mack em Dick we’ll put raisins in ne’er [= ‘never’] mind about what she likes
Joan: no no no we shan’t cause I daen’t like it
Dick: thou’ll hae tae mack a special ‘un for me then wi’ nowt [= ‘nothing’] but raisins in it
Maeve: aye that’ll be better then I rolls it up and I puts it on a baking sheet thou knowest Dick puts a bit mair [= ‘more’] sugar on top and a drop o’ milk and by thou should see what a shining paste they heve when they come out o’ th’ oven
Dick: oh aye
Maeve: oh they’re grand I know there’s ya [= ‘one’] fella comes tiv our house and if you daen’t put em out o’ road [= ‘out of the way’] there’s nane [= ‘none’] for you he’ll eat lot
Dick: aye that Griffiths fella
Maeve: aye 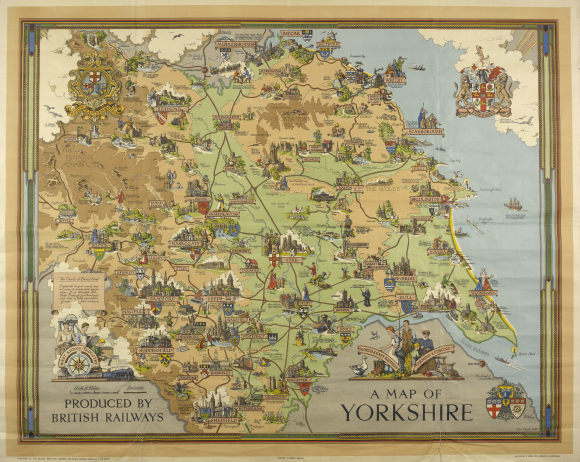 Above: An illustrated map of Yorkshire, featuring Filey on the coast between Scarborough and Bridlington.

Our team enjoyed listening to Maeve and Dick revel in the comforts of baking at home, and it resonated with those of us who picked up new skills during in lockdown. We also found familiar joy in hearing them debate one other about the perfect amount of currants to include in their favourite dish. Perhaps it is time for all aspiring bakers to rediscover an old favourite like Pig Lug?

This recording featuring food from Filey was captured by John Widdowson and is part of the Leeds Archive of Vernacular Culture (C1829). The collection is a diverse and absorbing treasure trove of sound recordings from the former Institute of Dialect and Folk Life Studies (IDFLS), part of the University of Leeds from October 1964 to September 1983. It also contains dialect-related recordings made prior to the establishment of the Institute, as well as many sounds recordings made for the Survey of English Dialects (SED), the first ever comprehensive, nationwide survey of vernacular speech in England. The collection was donated to us in 2019 for digitisation as part of the UOSH project.

Over 300 examples of dialect are represented in the SED, forming an important and moving record of life in the late 19th and early to mid-20th centuries. These sound recordings provide us with a window to a vanishing world at a point where many (though not all) the old ways were dying out.

It also provides us with a timely reminder of the vital work we are carrying out and spurs us on to keep preserving sounds, as there is lots more work to do. Look out for new websites exploring the History of Recorded Sound and the speeches of famous orators on Speaking Out in the coming months.

Thank you to Jonnie Robinson, Charlotte Wardley and Andrew Ormsby for your contributions to this article, and the Leeds University Dialect and Heritage project for giving us permission to use this recording.

Congratulations are due to every member of the UOSH team at the British Library and partner hubs for all that has been achieved over the past year.

Posted by Nina Webb-Bourne at 09:00:00 in Accents & dialects , Archives , Contemporary Britain , Digitisation , Save our Sounds , Sound and vision

Posted by Nina Webb-Bourne at 9:00 AM