Recording of the week: the swimming songbird

The White-throated Dipper (Cinclus cinclus) is a bird that just loves water. Normally found alongside fast flowing rivers and streams, this little songbird has evolved to dive, swim and even walk underwater. Though it’s almost impossible to believe that a bird not much larger than a sparrow could survive in such precarious conditions, the dipper has a number of special adaptations that allow it to thrive. Strong legs help individuals brace themselves against the current while their feet are able to firmly grip slippery rocks and pebbles both above and below the surface. They also possess powerful, rounded wings that act much like flippers when swimming underwater. 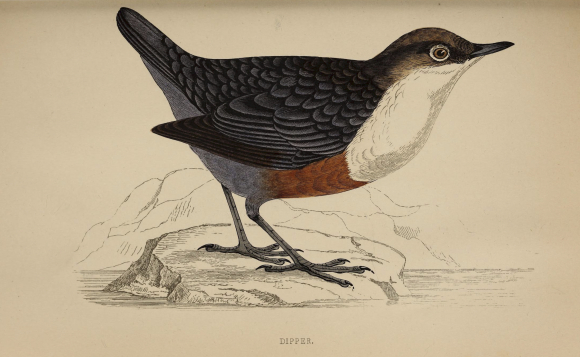 Hand coloured woodblock print of a Dipper, produced by Alexander Francis Lydon for Volume 3 of A history of British Birds.

A lovely description of the Dipper's song can be found in A History of British Birds, a multi volume collection written by the parson-naturalist Reverend F. O. Morris and published by Groombridge & Sons between 1850-1857. Morris wrote:

‘The song of this interesting bird is melodious and lively, though short. It is to be heard in sunny weather at all seasons of the year – a sweet accompaniment to the murmuring music of the rippling trout-stream, which soothes the ear and the heart of the solitary fly-fisher, as he quietly wends his way along, at peace with all the world.’

This close proximity to water makes recording dippers notoriously difficult; all too often its song and calls are drowned out by the rapid current. Despite the challenges, the sound archive does have almost 100 recordings of the White-throated Dipper in its collection.

The following example was recorded near the River Vrynwy in Wales by wildlife sound recordist Richard Margoschis. A breeding pair used rocks in the middle of the fast-flowing river as their songposts and it’s from one of these that the male in this recording was captured delivering his song. Though certainly melodious and lively, the song appears to be much longer than described by Morris.

This recording was digitised as part of the Library’s Unlocking our Sound Heritage project. Now in its fourth year, this UK-wide project aims to digitally preserve and provide public access to some of the nation’s most unique and at risk sound recordings. Thousands of wildlife recordings from all over the world have been digitised so far and you can keep up-to-date with the project’s progress by following @BLSoundHeritage.

Books, Contemporary Britain, Digitisation, Recording of the week, Save our Sounds, Sound and vision, Wildlife sounds