Recording of the week: Friction drum song from Botswana

This song, based on the lyric 'The children of the traditional doctor can kill the medical doctor', is performed by Sebata on the sevuikivuiki friction drum and other Mbukushu villagers in the Tsodilo Hills, in the far north west of Botswana. It was recorded by John Brearley in 1982 during his first field trip to the country, one of many he conducted over the following decades.

The sevuikivuiki is a friction drum constructed over a hole in the ground. A hole is dug, about the size of a bucket, and a fairly flat woven mat is placed over it acting as the drum skin. On top of this sits the core of a corn-cob and a long notched stick kept in place by the performer’s foot. The instrument is played by rubbing two smaller sticks along the notches, producing a percussive sound that is deepened through a resonating hole in the ground. 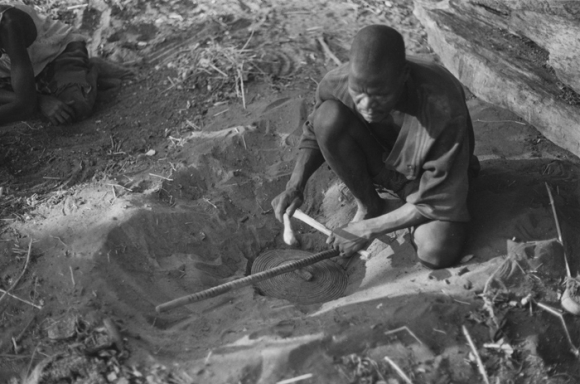 John Brearley describes the instrument in detail in his article ‘A musical tour of Botswana’ in Botswana Notes and Records (Volume 16, 1984, pp45-57).

The Tsolido Hills were designated a UNESCO World Heritage site in 2001 on account of the roughly 4000 examples of rock art dating back almost 100,000 years. These are beautifully described and illustrated on the British Museum’s African Rock Art website.

Although the Mbukushu, a Bantu people, only moved into this Tsolido Hills region within the last 200 years or so, they live amongst the various hunter-gatherer peoples who would have been responsible for the art works. Indeed hunter-gatherers and farming Bantu peoples have lived in this location for centuries: it is thought that many of the paintings were created by Bantu farmers as early as 800 - 1200 AD.

The recording forms part of the John Brearley Collection (C65). More recordings from this collection can be listened to on British Library Sounds.