The Daniels Ethnographical Expedition to New Guinea 1904 Cylinder Collection (C62) is a collection of 40 wax cylinders recorded in what is today Papua New Guinea. The collection – formerly known as the ‘Seligman New Guinea Cylinders’ – came into the Library in the 1950s as part of the Sir James Frazer Collection from the University of Cambridge.

This collection is part of the research focus of True Echoes, a three-year research project funded by the Leverhulme Trust and the Department for Business, Energy and Industrial Strategy (BEIS). Learn more about True Echoes in a previous post. It is the second oldest of the eight collections researched by the project, and one of three from Papua New Guinea. The project is overseeing the reorganisation of some of the cylinders within these collections and also the renaming of some of the collections. These changes will be implemented in the British Library catalogue towards the end of the project.

The Daniels Ethnographical Expedition was led and financed by Major William Cooke Daniels (1870–1918), a wealthy American retailer who met the British anthropologist Charles Gabriel Seligmann (1873–1940) by chance on a fishing trip in Hampshire, UK. Seligmann had taken part in the 1898 Cambridge Anthropological Expedition to Torres Straits and had visited what was then British New Guinea. His interest continued after his return to the UK. The other members of the Daniels expedition were Walter Mersh Strong (1873–1946), a doctor who left midway through to become Assistant Resident Magistrate in Mekeo district, and Arthur Henry Dunning (1884–1959).

Seligmann, Strong, and Dunning arrived in the capital, Port Moresby, on 19 December 1903. The first recordings were made on 5 January 1904 in Port Moresby, when Dunning, assisted by British Resident Magistrate Francis Rickman Barton, recorded three cylinders of lagatoi songs. Lagatoi are the double-hulled sailing canoes used in the hiri, the annual trading expedition that Motu/Koita people took to the Papuan Gulf to trade their clay pots for sago; the hiri is still celebrated today and remains an important symbol for the Motu/Koita people. 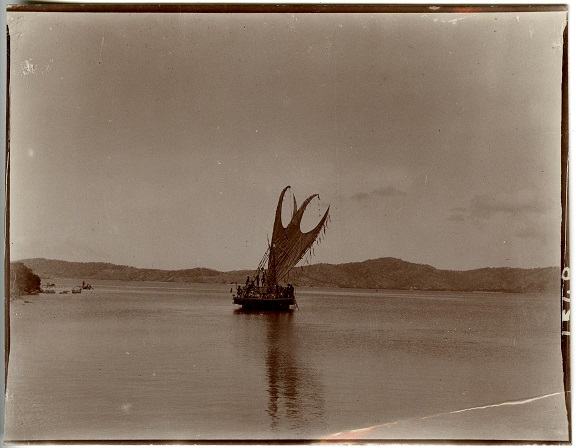 Above: Lagatoi canoe, 1904. Photo taken during the Daniels expedition, 1904. British Museum Oc,B119-150 © The Trustees of the British Museum

Seligmann, Strong, and Dunning joined a government expedition to the western part of British New Guinea in January, but left early when Seligmann and Dunning fell ill. They did not take the phonograph, the machine used to record and play wax cylinders, on this trip as they could not find any spare cylinders.

Daniels and his yacht, the Kori, arrived in Port Moresby on 23 May. Over the next five months, the team visited Hula and the Mekeo and Rigo districts in what is now Central Province, and islands in Milne Bay including Samarai, Tubetube, Muyua, Gawa, Kwaiawata, Iwa, and the Trobriand Islands. They also visited Dogura in Bartle Bay, and Wagawaga, a village on the coast of Milne Bay.

Seligmann and Dunning recorded eleven cylinders in the Rigo district, including songs in the Sinaugoro, and possibly the Uare and Doromu-Koki languages. They travelled from Rigo to the village of Hula, where five cylinders were recorded. In what is today Milne Bay Province, they recorded five cylinders on Tubetube, two on the Trobriand Islands, and six at Wagawaga. In October, the expedition returned to Port Moresby and Daniels left. Seligmann and Dunning stayed in Port Moresby, spending time with Barton and Ahuia Ova, the Koita Chief and Village Constable of Hanuabada, the Motu/Koita village near Port Moresby. Ahuia had previously worked with members of the 1898 Cambridge Expedition. Seligmann and Dunning recorded seven cylinders in the Koitabu language, including one by Ahuia Ova himself. Two other lagatoi songs were performed by a Motu man named Igo who had travelled with the expedition in Central district. 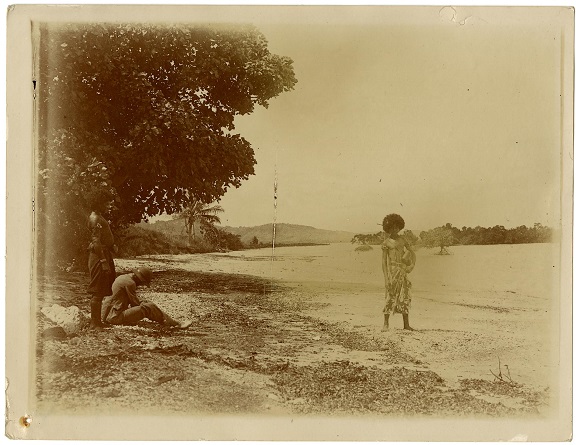 Above: From left to right: Unidentified man, Strong and Igo on a beach, 1904. British Museum Oc,B119.52 © The Trustees of the British Museum

According to the announcement, this recording is “A sung song at the Kaiwos Womilamala, by [Tobiga]. Trobriand Islands, September 1904”. The word Osebouta is written on the cylinder box lid, but the pronunciation in the announcement sounds more like osiboita.

linus digim’Rina, a Trobriand Islander and anthropologist at the University of Papua New Guinea, and collaborating researcher on the True Echoes project, has contributed this perspective on the two recordings from the Trobriand Islands in the collection:

“Given that Major Daniels’ yacht Kori visited the Trobriand Islands in September 1904, there is a good chance that Seligmann’s recording of the two songs Mamiepo C62/1420 and Osebouta C62/1419 occurred during the Kuboma (south-west coastal district including Luba) Milamala yam festival season. The season customarily falls between July and September. In the local parlance these would be within the moons (tubukona) of Khaluwalasi, Khaluwasasa/Iyalaki and Iyakoki, respectively.

Therefore I do not think Seligmann’s recorded pronouncement and notation of the songs being ‘sung at kaiwos Womilamala’ [‘sung at Milamala dances’] were completely off the mark. Although I do not have any definite recollections of the named songs, I do not doubt that these two songs belong to the Milamala festival dance songs genre. C62/1419 27 Osebouta is etymologically odd or warped although certain key parts of the lyrics like ‘batagava Bunita’ were recognisable alluding to marine life like sailing. The closest rendition of the name might be ‘wosi bwarita’ which means ‘song of seas’. The performer is Tobiga which, in the recording is repeated by Seligmann after a slip. And Tobiga is a common enough Trobriand male name. In fact the tune is very familiar to the ear as a cheerful Milamala song. There is a charming Kitava song called Yaulabuta but the lyrics and tone of Osebouta nowhere near resemble the former. As I cannot make much of the name Osebouta and its provenance I shall leave it at that.

On the other hand, C62/1420 26 Mamiepo appears rather interesting. Like Osebouta, Mamiepo is most probably a misspelling of the word for the pawpaw/papaya fruit, Momyepu. Although I have not come across a song within the Milamala dance song genre going by that name, the lyrics quite frequently mention the word rarana. This refers to raw pawpaw which due to lack of properly ripened pawpaw fruits available, people may be compelled to eat, sometimes by boiling or baking peeled pieces as a snack or dinner. Listening carefully to the repeated verse, it seems as if pawpaw fruit is metaphorically evoked to convey the image of one taking one’s chances way too early than is necessary. As a result there is this impression of regret over lost opportunity towards the end of the lyric.

Although Mamiepo is a dance song and as pronounced by Seligmann, there were no background sounds of backup by other singers or even drum beats. This might suggest that the recording came about as a result of Seligmann and/or his team’s request, solicitation and insistence.

Unlike Malinowski’s recordings which had a bit more related ethnographic material to augment their contexts, these two recordings will notwithstanding generate much interest and curiosity among the present locals in identifying the songs, performers, composers and place of recording.”

linus previously contributed to a Sound & Vision blog post on Malinowski's 1915 - 1918 recordings from the Trobriand Islands.

Posted by Rebekah Hayes at 7:00 AM