Recording of the week: An interview with Ravi Shankar

In 2017, the Mike Sparrow Collection (C1248) was the first audio collection to be preserved as part of the Unlocking Our Sound Heritage project. Mike Sparrow (1948 - 2005) was a radio producer and presenter for BBC Radio London (UK) in the 1970s and 1980s, and his collection includes music, reviews, current affairs features and interviews from shows he worked on. One of my favourite recordings is of Mike Sparrow interviewing Indian sitar virtuoso and composer Ravi Shankar (1920 – 2012), in the 1970s.

Based on the details accompanying the collection and from clues within the audio, it is likely this recording was made in early 1978, shortly before Ravi Shankar’s performance on 20 January at the Royal Albert Hall (London, U.K.), in the same year. In this blog I will share some short excerpts from the recording. 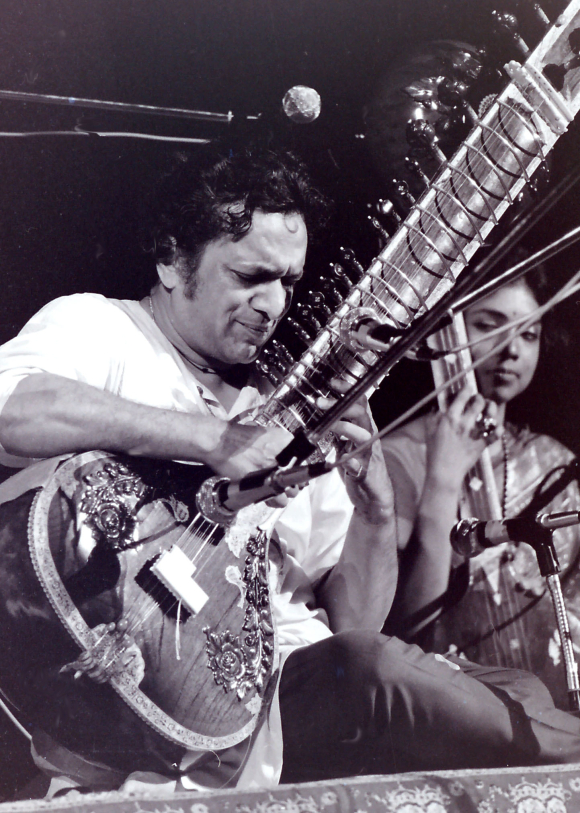 Ravi Shankar performing at Woodstock Festival in 1969, image sourced via Wikimedia Commons and licensed by CC-SA 4.0.

Ravi Shankar is known across the world for his teaching and performance work, and for sharing North Indian classical music with a range of audiences. In the interview he gives fascinating glimpses into this work, his well-documented association with other famous musicians (including George Harrison and Yehudi Menuhin) as well as discussing how best to define and appreciate different types of classical music.

In this first excerpt from the interview, Ravi Shankar explains what a raga is.

The sitar (a stringed instrument used Indian classical music) presents particular physical challenges due to the length of the fretboard and the method of playing, which, as Ravi Shankar mentions in the interview, results in cut fingers and callouses. In the second excerpt he describes the years of study required to develop the necessary technical and improvisational skills for performances.

Throughout the interview Ravi Shankar talks about his desire to bring Indian classical music to new audiences, and reflects on the positive effects of his association with the rock and roll world, including performing at the Monterey Pop Festival in 1967 (California, U.S.A.) and Woodstock in 1969 (New York, U.S.A.), where the image in this blog was taken. While performances such as these made it possible to reach younger listeners, he also expressed concern about the drinking, smoking and drug taking that took place at such festivals, activities that he thought might undermine the appreciation and enjoyment of the music.

This partially accounts for Ravi Shankar’s subsequent move away from the rock and roll music scene and when Mike Sparrow asks for further clarification, the discussion moves on to what is meant by the term 'classical music'. Their conversation can be heard in the following excerpt from the interview:

Later in the interview this theme is explored further in terms of how Western audiences react to their first encounters with classical Indian music and vice versa. Ravi Shankar talks specifically about the greater emphasis on melody and rhythm in Indian classical music, and how this can be disconcerting for listeners who are accustomed to harmony, modulation and dynamics being more central.

Mike Sparrow’s final question concerns Ravi Shankar’s (then) upcoming performance at the Royal Albert Hall (London, U.K.). What might audiences expect? He responds by explaining that he often does not decide on the ragas until shortly before the performance, although avoids starting with a long one in case of latecomers, who might otherwise face waiting outside for up to 45 minutes!

It would not have been possible to share this interview without the kind assistance of Ravi Shankar’s estate, Mike Sparrow’s executor and the BBC. Many recordings of Ravi Shankar’s performances can be accessed at the British Library, as well as his autobiography and other publications describing his life and work. More details on all of this can be found searching British Library catalogues.